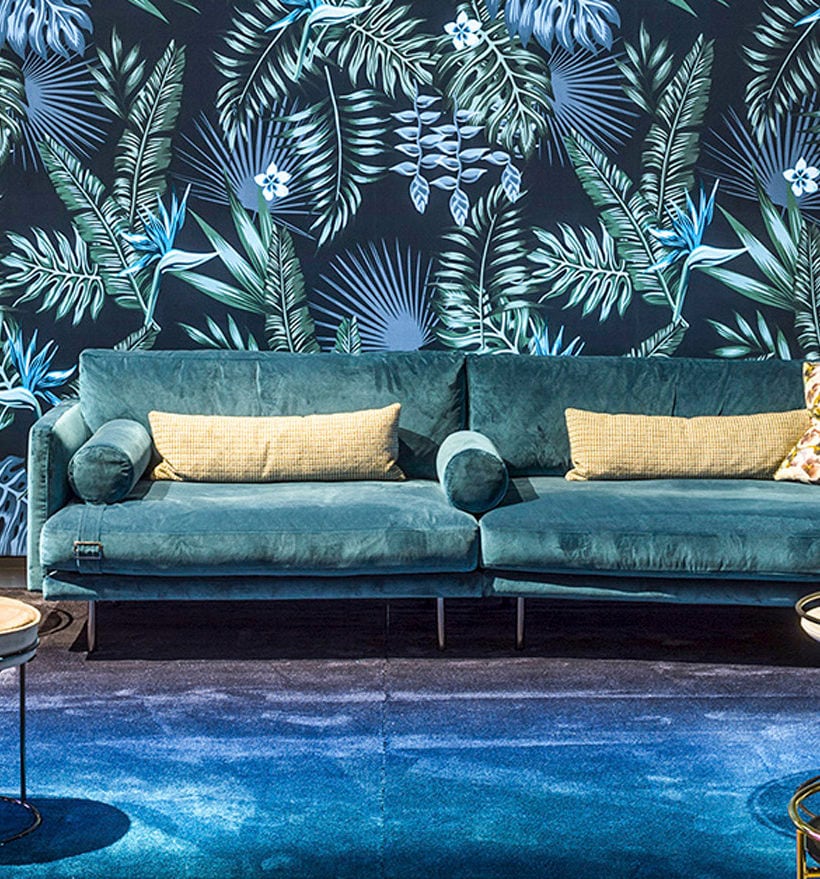 Sales of 140 million euros, 650 stores around the world, a catalogue of over 800 products, of which 100 made their debut in 2018. Calligaris celebrates 95 years with record numbers. And with a series of new projects that launch
the brand into a future of millennials

The monumental seat that looms on the traffic island at the entrance to Manzano, former capital of the Friuli chair district, is no longer there. “Thirty years ago it was all a ‘factory-city’: the streets were like its corridors, and the vans went incessantly from one workshop to another, as if the whole town were a big furniture warehouse,” Alessandro Calligaris, president of Calligaris and patriarch of the third generation of entrepreneurs behind this historic Italian brand recalls, without nostalgia.

Also because the memory and the mastery are conserved, solid and alive, in the world, thanks to his company that stands there, red, white and enormous by the side of the main street, like an ideal monument of this industrious territory.

An industrial family business with an international range, as in the finest Italian tradition, which this year celebrates its 95th anniversary, with the fresh enthusiasm of the millennials: an updated logo, a new website, and the original pay-off ‘My Home’ to underline the desire to furnish the home in its entirety, from the chairs to the most engaging and pop complements.

This thrust is joined by the restyling of the stores (650 around the world) and the launch of an augmented reality app that offers a virtual view of every product, as if it were already in your home, in actual size, almost by magic. Beyond the enormous number of over 100 new products put on the market this year, the catalogue contains a total of over 800 creations.

“At the latest Salone del mobile, for example, we presented Lab, a table that is extensible thanks to an electronic mechanism, a patent that joins the dozens of inventions we have registered over the years,”  Calligaris says, explaining: “The intent is to be constantly projected into the future and engaged in research.”

A future that stands on the shoulders of giants. Or, more precisely: it is in their hands. In Manzano alone Calligaris has three facilities: a headquarters with a large showroom on the ground floor, as well as offices and a creative/prototyping division composed of 20 persons, guided by Calligaris himself along with his right-hand man Massimo Cian (Style & Design Manager of Calligaris).

Then there is a shed of 28,000 square meters, for the assembly of tables and chairs. And another plant, 12,000 square meters, where wood is painted and finished, still using crafts methods that are truly surprising in the case of a company with sales of over 140 million euros, 700 employees, 650 stores and exports to 100 countries around the world.

“If a bit of glue falls on the wood I fix it like this, with a brush,” says a worker specialized in sanding, finishing and quality control, a painstaking operation carried out at seven workstations and done only by women, the daughters and grand-daughters of women from Friuli who did the same job in the past, for a lifetime. The varnishing and painting of legs and structures is also done by hand, dipping the pieces one by one into the stain, hanging them up to dry on a rotating rack, like a sort of design ski lift.

The metal parts arrive from the nearby plant at San Stino di Livenza. The semi-finished wooden parts are from the Croatian city of Ravna Gora, a strategic location for the supply of raw material, where Calligaris has purchased a former state factory that has specialized for decades in the working of beech, ash and oak. A precise strategy of corporate organization, which has recently continued with the acquisition of Ditre Italia, a crafts firm founded in 1976 and considered one of the finest in the field of upholstery (sofas, armchairs and beds).

Founded in 1923 as a factory specializing in caned chairs (in the 1960s the firm patented the first machinery for mechanization of the operation), over the decades Calligaris has created iconic products like the Sabrina, Air, New York and Bess seats, working with outstanding designers like Aldo Cibic and Pininfarina (the latter designed Orbital, which as some of the assembly workers tell us with a smile is the most complicated table of all) and encouraging young talents like the promising Valerio Sommella, as well as the creativity of Valentina Carretta and the studio Archirivolto. “We have turned to several emerging designers also for the creation of pieces for the CoDe collection of complements,” the president explains, “a line of 17 young, fun products that enable us to approach a new, hyperconnected target.”

To warm up and complete the offerings of the stores, besides vases and mirrors a line of deep-pile carpets has been created, printed with an innovative technique that keeps the design and texture legible, even when the surface is roughed up.

“There are companies that like to associate themselves with famous design signatures,” Calligaris continues, “but we prefer to work with professionals, including young talents, who are capable of thinking in terms of industrialization and feasibility, in tune with the brand. If an idea cannot be reproduced at a reasonable costs it remains a one-off, so it is more like a painting than a design product.”

This is a vital factor for a constantly growing company, for which foreign sales account for 70% of income, which has recently launched an e-commerce service (for the moment in Italy, the UK and France, but also in the United States in the near future) and is making inroads not only in China, where it already has ten monobrand stores, but also on unexpected markets like Tunisia, Senegal, Ghana and Ivory Coast.

“We also have three directly managed flagship stores, though in the future we will be not be opening others: we prefer to work with local partners who have in-depth knowledge of the market and the territory. All the new openings will fit into this scheme,” Calligaris explains, adding: “every city of medium size, from 300,000 inhabitants up, is potentially interesting.”

After the big launch celebration at the latest Salone del Mobile, all the 100 products of the new collection took over, in the showroom, from the 2017 collection. There is the Icaro table, for example, featuring a lazy susan with a ceramic top at the center. Or the Liberty chair, destined to become a new bestseller. And the Atollo bench, covered in velvet and available in the most popular colors on the market: powder pink and emerald green.

Then there is the Manhattan system for the living area, with its completely personalized elements, including the structures of the tables and the bodies of the chairs, available for each model in metal or wood. “The millennials like to choose and to personalize, and this is why we have created a range that guarantees that kind of variation,” Calligaris concludes.

The imperative, he says, is playfulness. The basic idea for the next 95 years of history is that everyone will have fun purchasing good Italian design, while at the same time becoming, in every sense, the architects of their own lives.