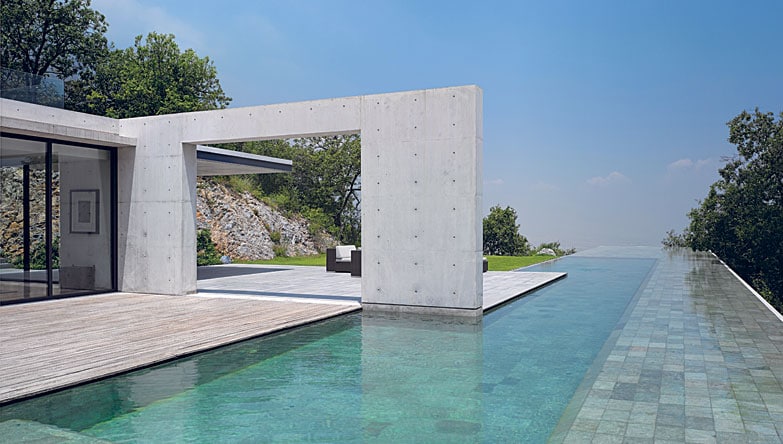 Today Tadao Ando, 73, with a studio in Osaka, after having built works all over the world and passed through different stylistic phases, seems to have achieved a new kind of happiness.

For some time now he has been one of the main protagonists of the contemporary scene, at least since the beginning of the 1980s, when his Rokko Houses were published in the magazine “Casabella,” which later issued an entire special notebook on that project. He was precocious and restless, emerging as a champion of modernism, who has then devoted decades to the pursuit of novelty, originality and new perspectives, leading to results that have often been controversial among critics. In his various periods he has experimented with the acrid taste of brute material, the rigors of the strictest minimalism, exploring a new monumentality based on geometric solids. But now the pursuit of new effects seems to be finished. Maybe he has finally been liberated from the need to be constantly innovative and surprising at all costs. He now applies his talent without inhibitions or ideologies, to achieve the finest possible results. And maybe this is precisely a way, thanks to the freshness of the approach, to become even more innovative and contemporary than he was in the past. The production of this recent Ando is very positive for all: for his clients, who can enjoy excellent spaces organized in a surprising way; and for the critics, no longer forced to rack their brains to interpret the intellectual flights of a master who is also famous for being a man of few words, spoken or written. This fine house on the heights of Monterrey, in Mexico, confirms this recent trend towards simplification, composition through free volumes, concatenation of spaces. Ando practices a freedom of invention that combines the plastic force originating long ago in Le Corbusier with a capacity to control vision that is very theatrical, in the interiors, with a clear landscape inspiration in the exteriors. The Centro Roberto Garza Sada, a university building just built by Ando in the center of Monterrey, fully develops these characteristics with an energy that borders on brutality, with a sort of exhibited, sculptural muscular force. In the house shown here, we can see the same energy and determination, combining apparently extraneous volumes in forced bondings, but used with more grace, with all the care needed to avoid compromising the comfort, elegance and sense of welcome necessary for any domestic space. Of course there are virtuoso touches, but they happen on a plane of greater lightness, emphasizing the spectacular dimension, which is important in a villa of great luxury, and they remember to carefully connect every space, every view, every material in a continuous narrative, in which differences and changes come together in the end to form a unified image. A narrative punctuated by emotions, spectacular moments, like the transparent slab of the swimming pool that extends, like an ethereal blade of light, over the crest of the hill, suspended in the void over the panorama of the city of Monterrey. The way the outdoor living area is circumscribed and sheltered, facing the swimming pool, is symptomatic of Ando’s art: on one side, by an elegant concrete portal, patterned by the marks of the formwork, a true signature of the Japanese architect; on the other, by the visor that extends over the glass door leading to the living room inside. Free, independent architectural elements, designed with the terse lexicon of modernism, that appear as sculptural objects, not immediately revealing their function. The house itself, as a whole, is conceived as a conflict between contrasting figures and volumes, an overall scheme based on the square and the diagonal volume that pierces and surpasses it, fastening onto the edge of the ridge above it. The problem of connecting the two figures becomes the project theme: inside, the courtyard is cut into two triangles treated in opposite ways. One space becomes a flourishing green garden, the other a gray garden, without nature, composed only of a pool of water, that makes it inaccessible and reflects the light projected by the glazed wall and the exposed concrete walls. Inside, the diagonal volume contains the spaces with special functions, using the entire length of the volume. On the level below, a large library has shelves that rise to exploit the entire height, while a staircase rises in the space to fasten to the slab of the level above, where one reaches a space occupied by a very long dining table, offering a view, through a completely glazed wall, of the internal courtyard and the wild landscape of the Cumbres de Monterrey.