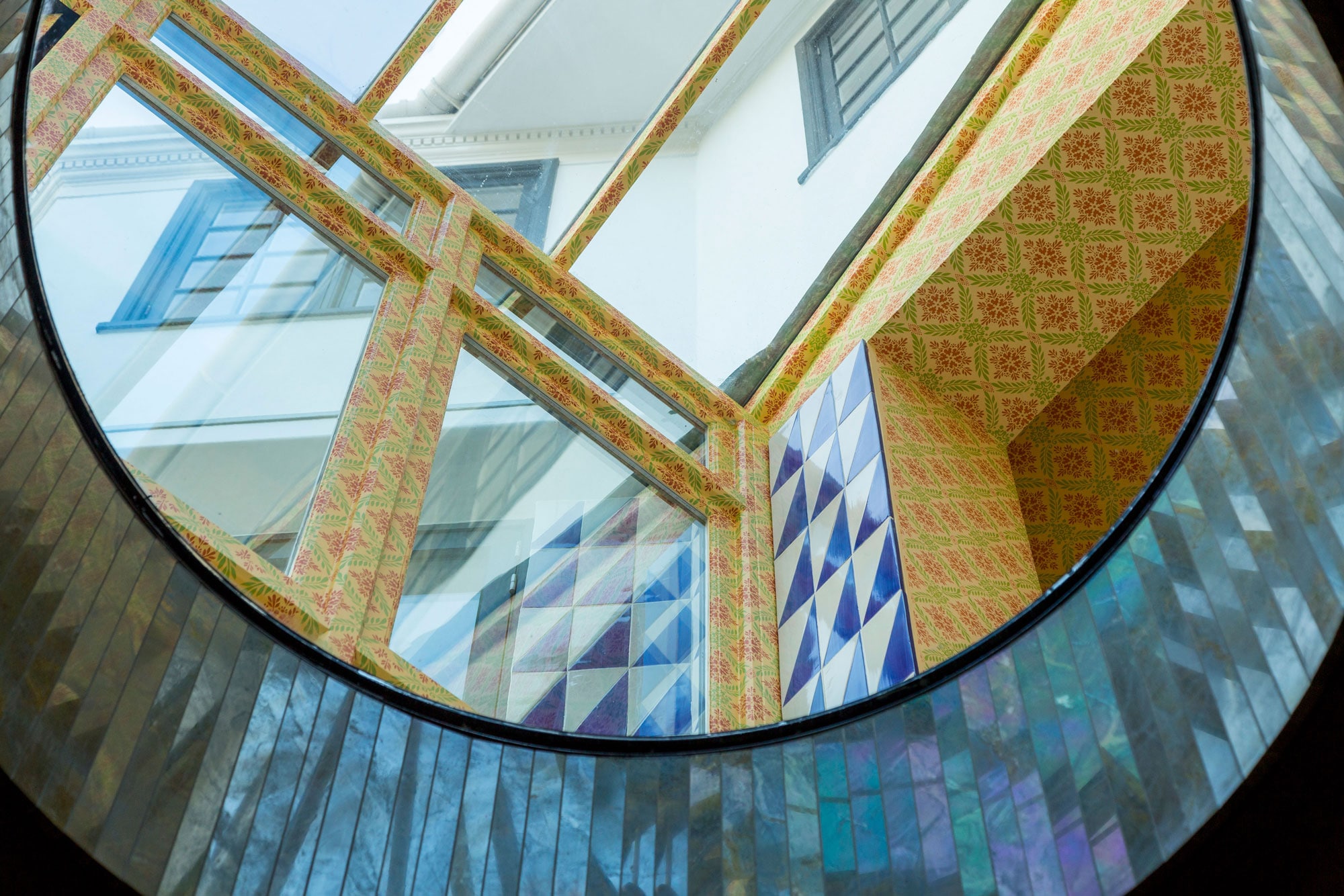 We’re in the London home of Annabel Karim Kassar, a French-born architect and designer and based all over the world (three offices: Beirut, Dubai and London). A large house with three levels plus a basement, not in the usual Victorian style, in the Camden/Primrose Hill zone, very close to parks and the city center. “In a quiet location, full of light, a gathering place for the family”, explains the designer, who among many other projects has done the reconstruction of part of the old souk of Beirut, transformed into an Entertainment Center.

“I don’t feel at home anywhere. I’m always ready to depart, but I know how to take possession of places. So before approaching this radical refit and identifying the guidelines, also in terms of mood, I visited some homes and several reminded me of a an English pub inside a Chinese garden.

The ones I liked best had been passed down from father to son and embodied a precious legacy, even in the midst of the everyday domestic landscape: objects, furniture, trophies, souvenirs of ancestors, who had often been soldiers in the colonies… Material that was not foreign to me. So I began to understand that this English home could be a mixture of emotions and nostalgia connected to my personal path and my own experiences”.

What landscape, and how much of it, goes into your spatial composition?

“I consider it an integral part of an overall design. It is not a decorative element added after the fact, though the natural element is subject to the rules of the art of gardens. In this case, I have thought of it as being intimately linked to the ‘layers’ of the house, and working first of all on the horizontal planes, to grant a sense of fluidity to the spaces, I concentrated on the floors: they have all become part of a process you can read completely, from the outdoor entrance area marked by round slabs of grey stone, to the back garden, a rigorous naturalistic installation with many native plants and a pavement that when it is not green is made of round sheets of white stone. The same material returns in the dining room/solarium and shifts to become a motif in cork, in the kitchen. The sole juxtaposition is that of the uniform oak floors with a very accentuated chevron shape for the parquet, in all the main spaces of the living area. The entrance zone – a vestibule ‘lit up’ by 28 custom light boxes made by CAI Light, the brand I co-founded with Isabelle Rolland and Christophe Hascoet, that occupy a space on the white ceiling – is introduced by a Dicksonia Antarctica tree fern and a stag’s-head applique made by CAI Light”.

What were the other important choices in terms of concept and implementation?

“I felt the need to give the building a solid base and strong roots. I have learned by experience that many architectural projects are sadly temporary, especially in countries like Lebanon, where everything can change very fast, in just a few hours. So instinctively I have tried to reconstruct, starting with the basement, all the way to the roof. It has been a job of total reorganization of the space, the result of the efforts of a large team of craftspeople guided by our interior designer, Violaine Jeantet; Alain Pin was in charge of the main lighting of the house. Their know-how is still contained in the experimental traces of the various rooms”.

Themes developed, and possible critical points of the project?

“The first was to redesign the basement as a multipurpose space, in which to live, swim, play… the architectural identity of the place needed to be rediscovered, using pure elements. This did not mean erasing the decoration, but first I thought about how to restore the rectangular form of the pool and how to move the unglazed stairs (they are now helical, in eucalyptus wood) to the end of the space that leads to the dining room-veranda on the upper level. I wanted to bring the sky and the sensations of the garden down into the basement, to totally integrate this space with the rest of the house. So I covered the walls with large pieces of green Brazilian marble, made even more spectacular by the effect of antique handcrafted mirrors in blue blown glass. Then I partially closed the ceiling with a glass roof, from which I have hung a chandelier in the form of a diamond (1 m in diameter), that dialogues with the Barrisol tensile cover in reflecting gray that visually expands the height of the room.

The second theme: I thought about how to reinterpret my bedroom on the first floor, a very large space I have tried to make more dynamic by integrating a Japanese wooden bath and a “cabinet de curiosités” made of freestanding equipped columns, white on the outside and lacquered in different colors on the inside. The bed can be closed off thanks to a silk curtain attached by a round structure to the ceiling: therefore I don’t need perimeter blinds, and the nest effect is ensured. Nothing more. Three carpets in a single large geometric expanse, 12 meters long, complete the landscape of the space. The dressing room, TV room and office zone are spaces apart. The third, uppermost level contains the guestrooms with baths.

Another point covered by the project was the connection between the various ground floor spaces for the living area. Between the wine cellar and the adjacent toilette space, the first lined with cork, the second a texture in lambskin, I have placed a window like an eye, an oculus at human height, to visually connect the two rooms. On the other hand, I have opened the main entrance from the living area with a span, 4 meters wide and 3.5 meters high, to make an enormous sliding door in aubergine-color lambskin on one side and white leather on the other, facing the entrance hall. From the latter, access to the kitchen and studio spaces has been underlined by flush-mounted lacquered doors. The opening of new windows towards the garden has allowed me to increase the luminosity of the living spaces, where the walls treated as frames have been covered with pieces of embossed black leather. One factor, in any case, is important: in every intervention the color is always and only part of the material used, even if it is just wall paint”.

In this jubilee of materials that designate the ‘specific hue’ of every room, what do you think is the most characteristic architectural sign, in terms of both overall and detail solutions?

“The strong point of the whole house is undoubtedly the main staircase connecting the levels, which replaces the existing marble staircase, which was rather static and visually cumbersome. It is the result of a structural assemblage, on site, of bookshelves in Padauk wood that form the balustrade and its dynamic sectional development. This is the most special piece of craftsmanship in the house, for which we built many prototypes based on sketches and drawings”.

In the end, which space is your favorite?

“The bar, a narrow cavern clad in red velvet, with a splendid view of the garden”.

View of the sunroom from the dining room. In the foreground, Peacock armchair by Cappellini (design Dror Benshetrit) and hanging lamp by Tom Dixon. (Photo Georges Fessy)
The internal staircase made by on-site assembly of bookshelves in Padauk wood to form the balustrade, with dynamic developments in the cross-section. (Photo David Brook)
The entrance hall, an essential, empty space ‘ignited’ by 28 lightboxes produced by CAI-Light. The fluid design is underscored by the uniform oak surfaces with a chevron design of the wood flooring. In the foreground, Corallo Chair by the Campana brothers for Edra. (Photo David Brook)
Ground floor plan.
The bar space lined in red velvet, featuring round beige Thala stone slabs for the floor. (Photo David Brook)
A corner of the studio is made sophisticated by the motifs of the walls clad in hand-glazed Portuguese tiles based on an oriental model, forming a whole with the wooden iconography and figures of the original coffered ceiling. (Photo David Brook)
Featuring custom three-tone carpeting, the large master bedroom conceales the bed, thanks to silk curtains attached to the curved structure of the ceiling. (Photo David Brook).
View of Annabel room, with the silk curtains opened.
The wine-cellar space, clad in cork.
The oculus that frames the lambskin texture of the toilette, creating direct visual communication with the adjacent wine cellar. (Photos David Brook)
The foyer in wood and green Brazilian marble of the swimming pool.
The eye that connects the basement level and the ground floor, a source of zenithal light and a materic palette of forceful perceptive alchemy.
The landing of the helical staircase in the dining room-veranda on the ground floor.
View of the spectacular swimming pool created in the basement: an enclosure of green Brazilian marble in large sheets, interrupted by the glass roof that creates a direct dialogue with the sky and the colors of the garden, also reflected in the custom crystal chandelier with a diamond form by CAI-Light. (Photos David Brook)
#Design #Projects #London