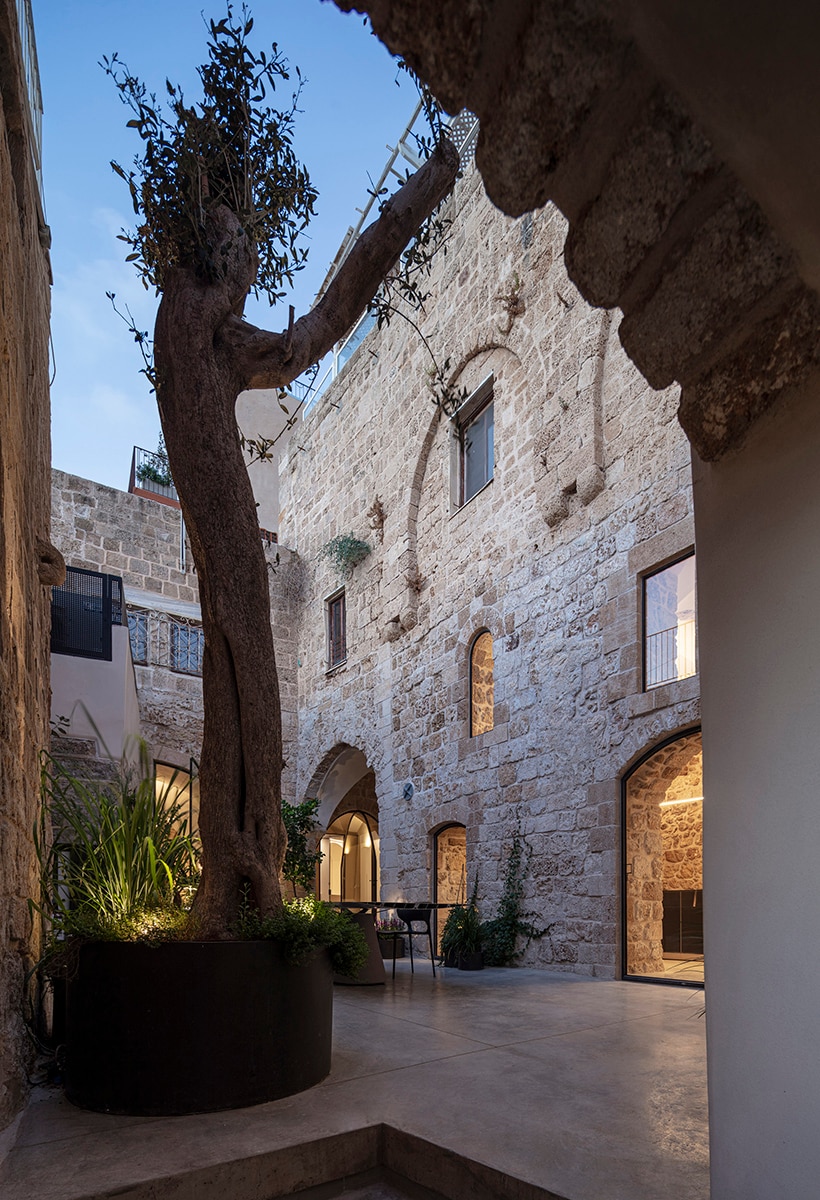 #architecture
Around the ottoman patio

Facing the sea at Jaffa, immersed in the Mediterranean light of Tel Aviv, this apartment gets its domestic feel from the encounter and peaceful coexistence of antique walls and light inserts in a contemporary cosmopolitan and metropolitan style

History is a palpable presence, part of the domestic landscape, if you choose to build and dwell in the area of the old port of Jaffa, in Tel Aviv, inside structures three centuries old that are rooted in the Ottoman tradition of architecture. The old walls take on new life thanks to a painstaking project that simultaneously conserves and transforms, opening spaces to light and the view of the sea, but also retreating into the intimacy of a patio, an outdoor living area of the sort that has always been the best counterpart of the Mediterranean house.

Vaults and arches form a series and overlap, resting on massive walls in a dense, fragmented architectural context; the project, in a minimal style, introduces elements of fluidity that foster transitions and connections between spaces. For Pitsou Kedem, the Israeli architect very active in the field of residential and commercial initiatives, the challenge was to come to terms of images, materials, proportions and dimensions not particularly suited to modern comforts, customs and habits. 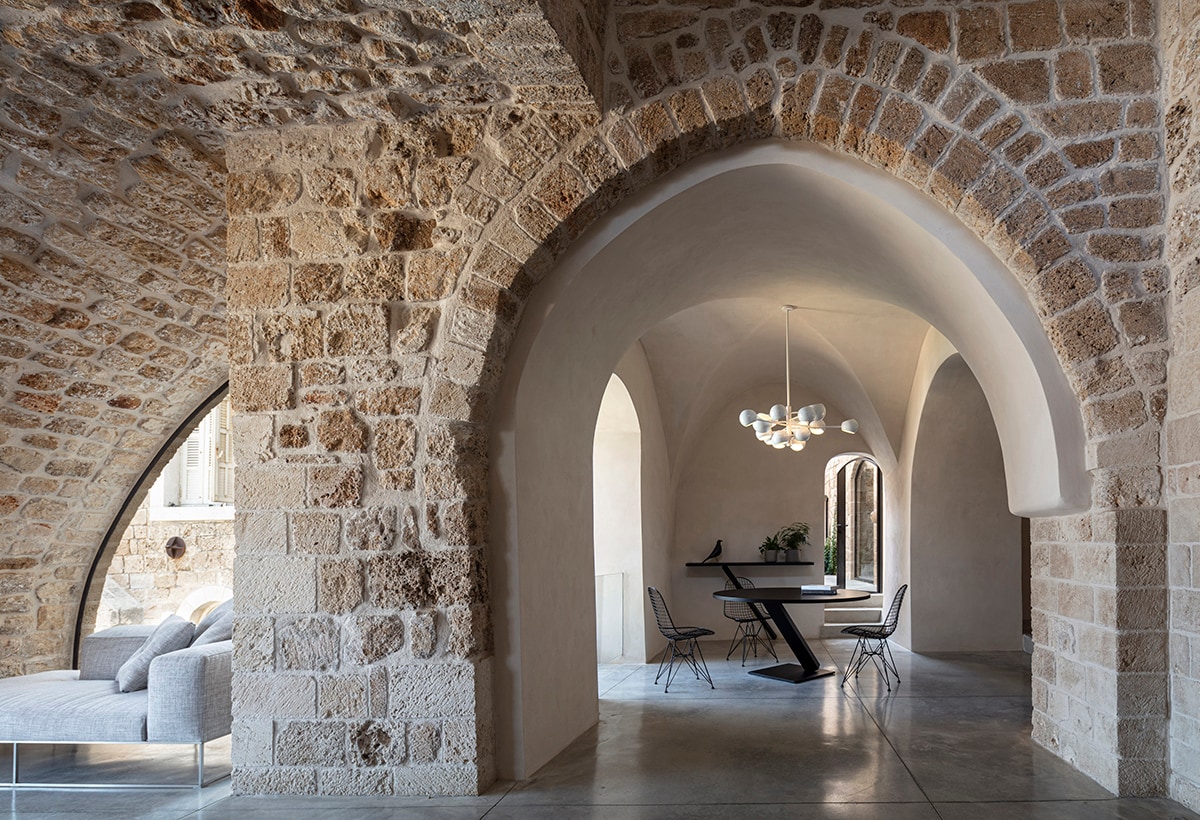 6
The living and dining areas with the Element table by Desalto, designed by Tokujin Yoshioka; the metal screen chairs are the DKR model by Charles & Ray Eames, produced by Vitra; on the ceiling, the Kopra Burst lamp by David Weeks Studio.

The architect counters this harsh, sporadic masonry landscape with a fluid space that shifts from one room to the next with ease, making the most of the rather compact proportions imposed by the Ottoman structure. The choice is not mimetic, not an imitation of the antique, but instead the invention of forms, profiles, planes, corners, guiding the gaze along jagged trajectories, through the rooms and the necessary connections.

In the double bedroom a pointed arch frays into a capital that forms an asymmetrical curl, while over the bed the vaults, finished with plaster in this case, overlap fragments of contrasting geometric form. Behind the kitchen the old walls display a true repertoire of arches, windows, niches and vaulted walls, all strictly different from the others and out of alignment. It is a kind of ancient, spectacular anarchy, probably produced by centuries of stratification, different interventions, modifications in various periods prompted by changing uses and necessities.

“The basic concept,” Kedem explains, “is to weave a connection between the Ottoman architecture and our approach which is clearly contemporary, and to find a connection between traditional construction techniques and the innovative technologies of the present.” An intention that takes concrete form, for example, in the insertion “in the original arched openings of glass doors, with casements in burnished bronze, which rotate around a pivot placed in a central or lateral position.” 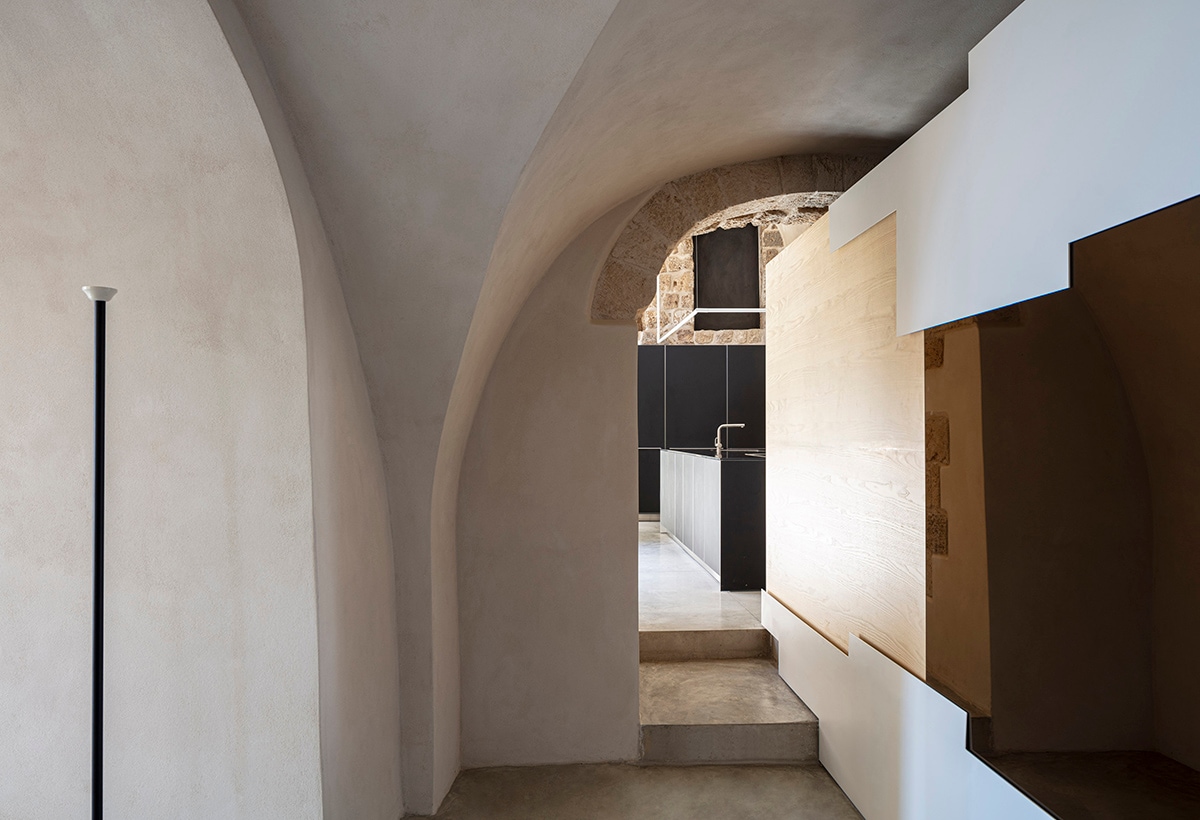 6
The passage connecting the living area to the kitchen; the floors are in polished gray concrete.

In this way the doors without hinges bring out the contiguity, but also the difference, between two worlds, antique and contemporary, which graze each other without touching. The large glass doors underline the irregular geometry of the arches and guide the interaction between the interiors and the patio that divides and connects the spaces of the apartment: on one side, the living room, master bedroom and kitchen with dining area; on the other, across the patio, two bedrooms and a bathroom.

The main problem – that of inserting technology for contemporary comfort in such a venerable structure – generates the most radical solution. According to the architect, “the most important design gesture is that of a metal housing that dynamically runs across the stone walls, containing the entire electrical system, the air conditioning and storage niches. At certain points,” he continues, “the housing is combined with wooden features like doors, the headboard of the bed or the parapets.” 4
Designed by Charles and Ray Eames, the seat shell of the Wire Chair echoes the form of the Eames Plastic Side Chair. Mounted on the legendary 'Eiffel Tower' base, the DKR combines transparency and functionality. The version with a powder-coated finish is also suited for use in the garden or on the terrace. The DKR chair is optionally available with a seat cushion or with a two-piece seat and back cushion covered in fabric or leather.

Therefore the identity of the apartment is organized through the interaction of two separate layers where the new never touches – at least not apparently – the old walls. A completely different, technological and dynamic architecture is placed over the antique structure, elegantly and very effectively enclosing all the physical plant systems, with a lining that equips the living space and projects the Ottoman building into a contemporary dimension.