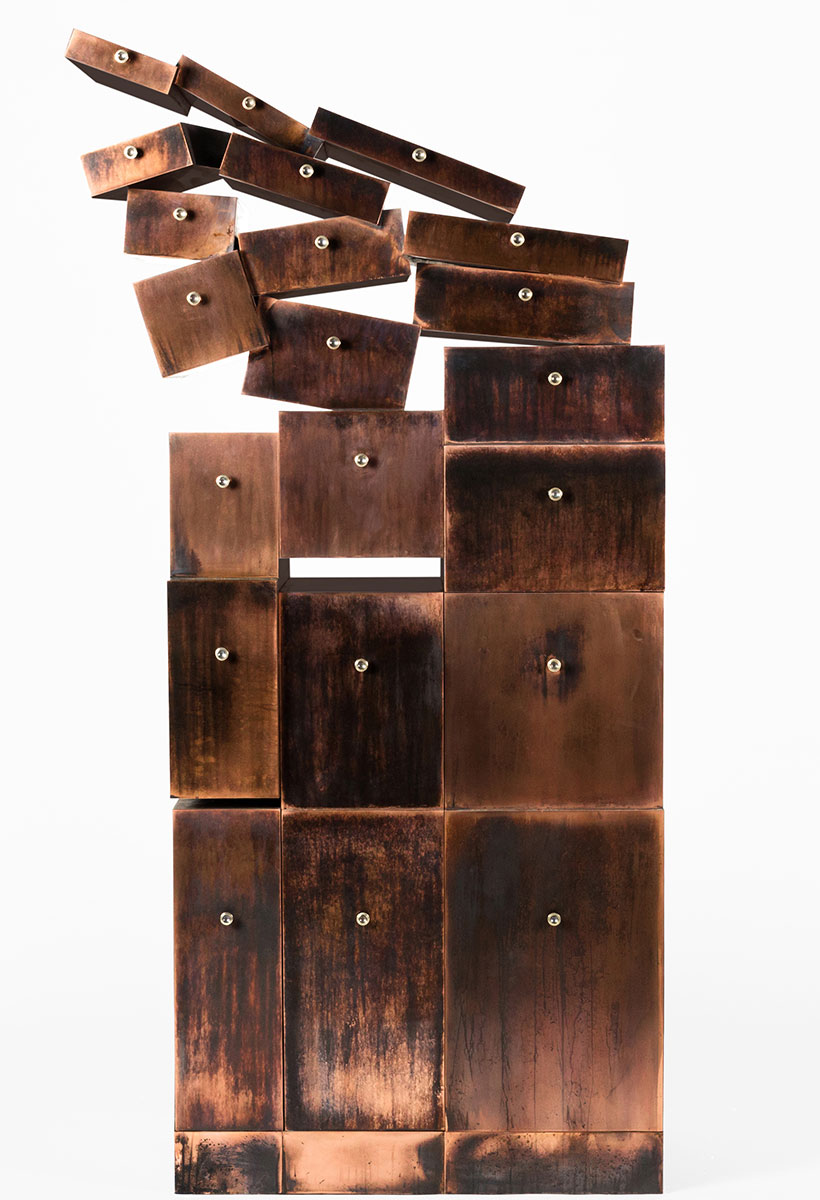 #design
Through the looking-glass
From Europe to the United States, from design to art. A physical and conceptual voyage made by young designers of various backgrounds, who find a natural setting in the galleries of New York

The famous book by Lewis Carroll written in 1872, Through the Looking-Glass and What Alice Found There, is often mentioned as a metaphor of a passage of state, a radical, sudden change of condition, triggering a feeling of physical and mental alteration that throws things, landscapes, personalities into a realm of paradox.

Getting beyond the didactic approach of the book created for children, Carroll, since he was a refined thinker and mathematician, reinforced its impact with sophisticated conceptual principles that can be variously applied in a context of science and design. The best known and incisive of these precepts is the so-called “Red Queen effect,” an evolutionary hypothesis formulated in 1973 by the American biologist Leigh Van Valen, according to which the constant refinement of the adaptation of the species is also necessary simply to stay in the same place.

In particular, Van Valen took his cue from a declaration of the Red Queen in the book, to assert that in order to evolve one must get beyond a standard state of progress: “Now, here, you see, it takes all the running you can do, to keep in the same place. If you want to get somewhere else, you must run at least twice as fast as that!” 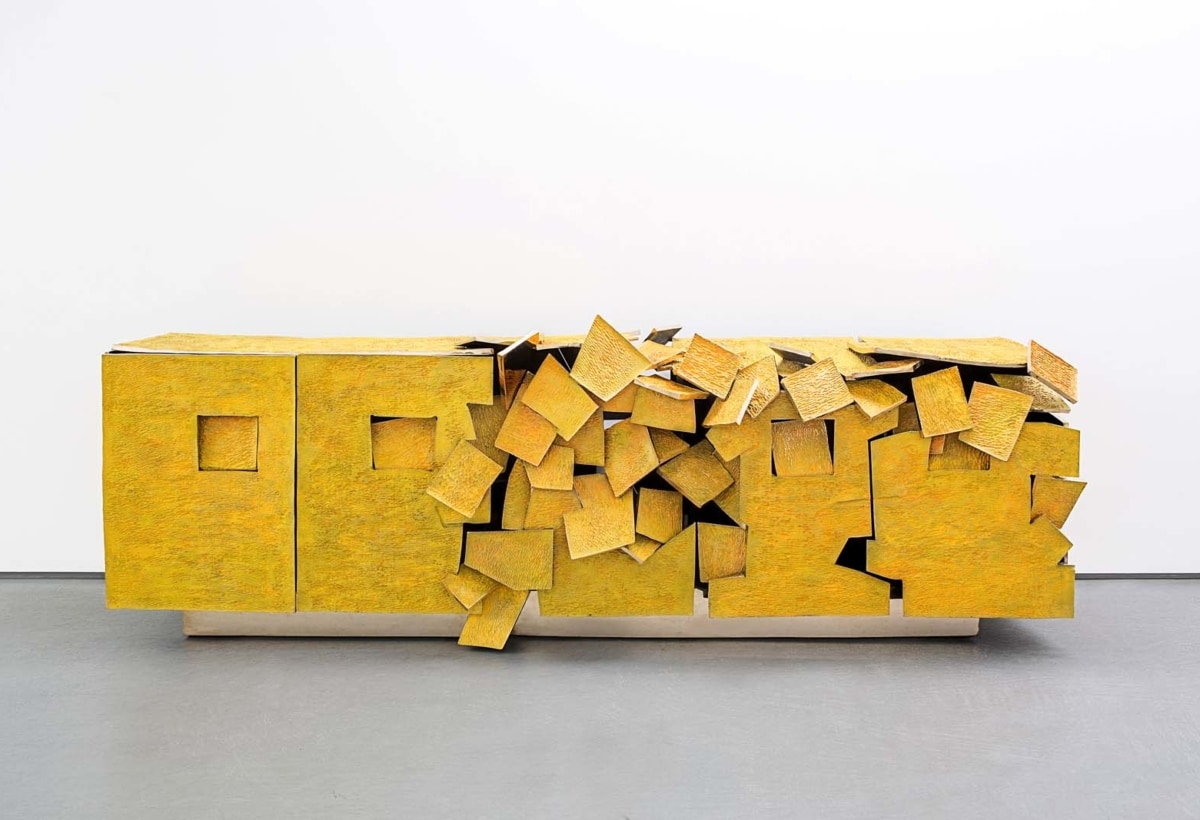 Surprisingly (but maybe not too much), the profundity of this scientific metaphor can offer a reference point for the interpretation of a phenomenon that is of increasing interest to design culture, but whose theoretical boundaries often seem to be ragged and hard to define: the intersection of art and design. A phenomenon that in our case has to do with certain young but already successful talents, European or Middle Eastern designers who thanks to a ‘voyage through the looking glass,’ from their countries of origin to the galleries of New York, have found a natural context for their work.

Exactly one year ago, Interni already took a look at this situation, with the article “Beyond the Border” in which Domitilla Dardi observed how the work done by many American authors with New York-based galleries was shifting the horizons of American design, with its traditional focus on pragmatism, simplification and the proudly industrial production.

This analysis becomes even more interesting if we apply it to the European design approach, which in spite of its multiple facets and defiance of categories stands out from American design for what might be called its ‘immanent art quota.’ Just consider the explicit use made of artistic languages by many of the great masters of Italian design: from the ready-mades of Achille Castiglioni to the primitivism of Ettore Sottsass Jr., or the kinetic pieces of Enzo Mari.

Hailing from this context, the younger generations of European design seem to find opportunities, across the ocean – but also across the borderline between art and market – to “run twice as fast”: a strategy of renewal of plastic languages that tends to generate increasingly complex forms. 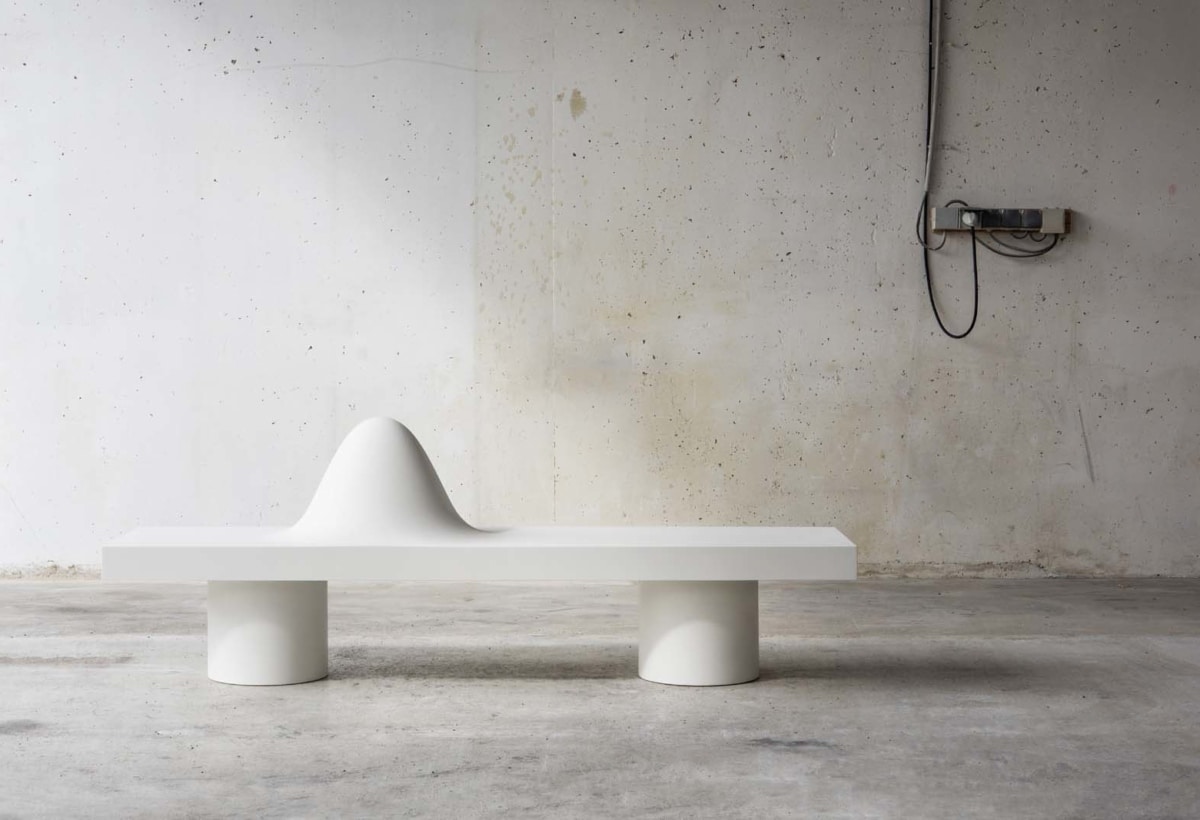 5
Photo: Damien Arlettaz. Courtesy Friedman Benda e Najla El Zein. - Distortion Bench (2017) represents the first collaboration between Najla El Zein and Friedman Benda, and it is her first piece shown in the United States, while awaiting her solo show in the fall.

Not by chance, the project-manifesto of this attitude has the paradigmatic name Distortion (2017): encouraged by a gallery of great charisma like Friedmann Benda, it bears the signature of the young Lebanese talent Najla El Zein (1983). Distortion Bench consists of a pair of benches in fiber-reinforced concrete and foam, bulging on the top in an unexpected and seductive way, but emphasized by primitive, oversized geometry. Contradictory objects, female and male, welcoming and repelling, harmonious yet altered: they could be ideal beds for the Sculpture pour aveugles of Constantin Brâncusi.

The individuals of the Roly-Poly Chair series (2016) are equally playful and disquieting, created for the same gallery by Faye Toogood (United Kingdom, 1977) as part of the research project Assemblages. This is a limited edition of 8 pieces, a chair with a squat, elephantine figure, massive to the point of lack of grace. The most interesting version is Water, made in lithium-barium crystal, a super-pure material usually used with lasers, especially in the optical sector. Combined with an original sense of mass, the crystal gives the work an anti-materic evanescence, making it resemble an alien creature.

“
Surprisingly (but maybe not too much), the profundity of this scientific metaphor can offer a reference point for the interpretation of a phenomenon that is of increasing interest to design culture, but whose theoretical boundaries often seem to be ragged and hard to define: the intersection of art and design"

To continue with the matching of Carroll’s classic characters, the twins Tweedledum and Tweedledee would have to be the works of the French designers Vincent Dubourg (1977) and Erwan Boulloud (1973) – the first working with Carpenters Workshop Gallery, the second with 21st Gallery – both engaged in a domestic reinterpretation of the expressive and conceptual themes of architectural deconstructivism from the late 1980s in the US.

Their works are apparently similar to the research of the British designer Jake Phipps for Todd Merrill Studio: his approach, however, dies not set out to explode the formal qualities of objects, but to emphasize the basic components of their material. While in his series Stellar glass and steel are enlarged under a microscope to show their mineral nature, likewise the support of his powerful Flux Console Table (2016) transmutes the fibrous nature of a traditional wooden base into a dizzying loop composed of a single sculptural macro-filament (actually half a kilometer of woven brass filaments, as in a gigantic energy conductor). The resulting gorgon effect seduces and paralyzes the observer with its monstrous mythological figure.

The trip across the looking glass cannot help but come to an end with the Red Queen herself: or blue, in this case, though she has been seen in a range of colors and materials. Here the maker is Harry Nuriev, a Russian designer, artist and architect, founder of Crosby Studios, and a rising star on the international interior design scene. His Crosby Tower (2017) for Patrick Parrish is not striking due to the outlandish shaping found in the work of many of his colleagues from across the sea. It is instead a linear, elegant shift of scale, towards an object based on models from architecture and painting of the early 20th century (rationalism, neo-plasticism).

Yet its presence is equally indispensable for this survey of a shared expressive trend. Because while it is true that every rule has its exception, it is also true that a taxonomy cannot exist without an ample category of ‘miscellaneous.’ Especially on the other side of the mirror.