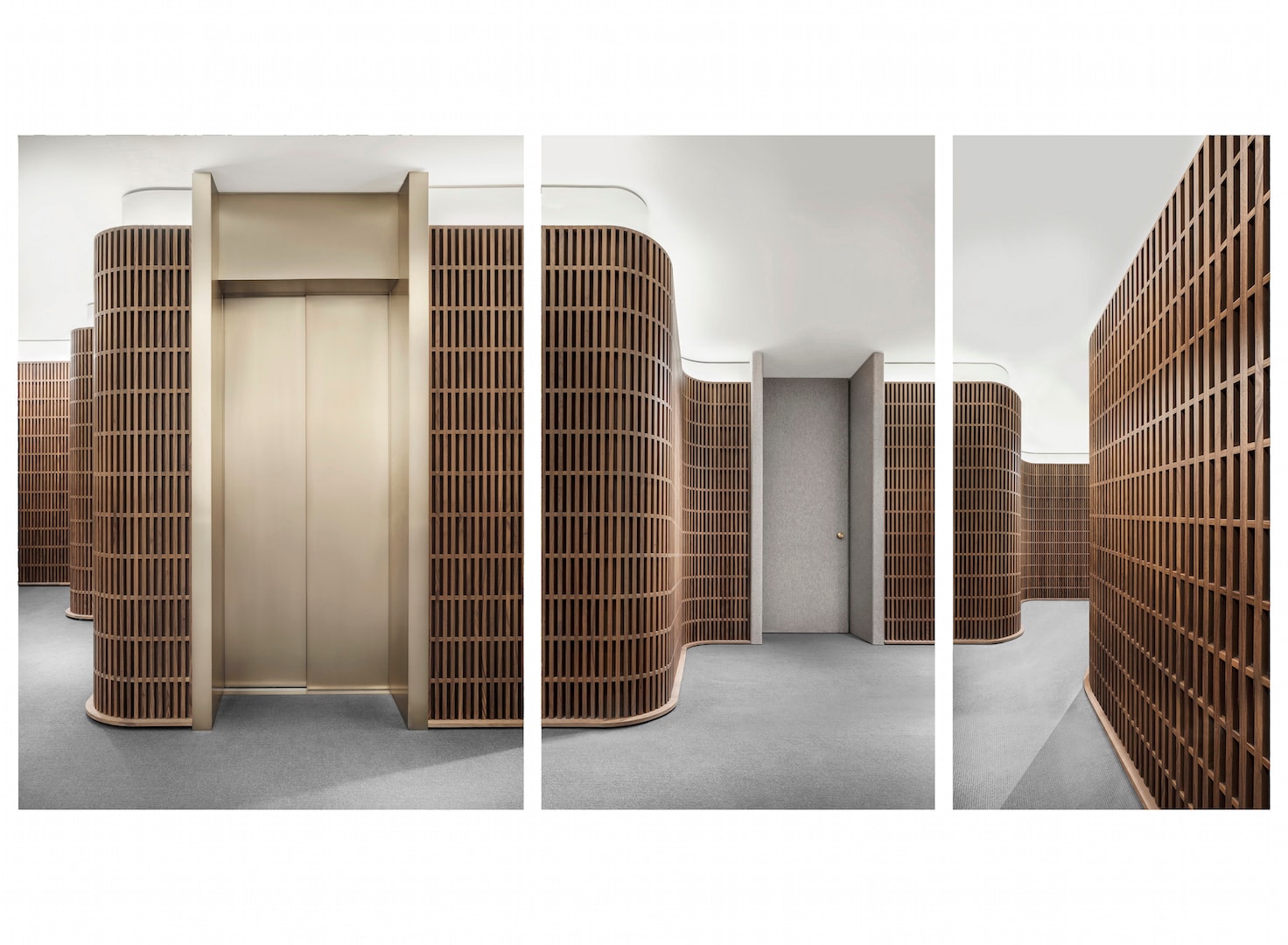 Strolling down the boulevards of Paris, a businessman sees a pair of decorated slippers, finds them to his liking and buys then as a gift for his wife. This could be seen as the beginning of the story of Bally, the Swiss company based in Caslano that operates in the fashion sector, producing footwear, accessories and clothing. Bally was founded in 1851 in the village of Schönenwerd by Carl Franz Bally and his brother Fritz, and the firm immediately stood out for fine craftsmanship and attention to detail.

After making things entirely by hand, it was one of the first companies to outfit its plant with industrial machinery. In 2008 it was acquired by Labelux Group, a holding company that also operates Jimmy Choo and Belstaff. Today Bally is one of the most highly esteemed luxury labels. Refinement, recognizability and fidelity are the key concepts behind the research of David Chipperfield Architects, called in by Bally to design a new store concept.

The approach is nothing new for the Swiss firm, which during the course of its history has always worked with architects of great prestige like the French architect Robert Mallet-Stevens or the Hungarian Marcel Breuer, a master of the Modern Movement, assigned the task of designing the first boutiques. The concept store created by David Chipperfield Architects for Bally is based on a series of ideas that can be combined with the intention of functioning as a unified whole.

A wooden wall, in different versions, wraps all the sides of the store and is one of the main ideas of the project, with the task of functioning for both display and stock, bringing both functional and decorative characteristics. The wooden wall becomes a display formed by a three-dimensional grid of American walnut boards vertically and horizontally interlocked to make it possible to attached a series of display fixtures in aluminium, for hanging garments, shelves and lights.

The wooden wall also functions as a “stock” constructed as a grille, again with interlocked boards but in a more rarified arrangement, forming boxes for the merchandise. The wall combines characteristics of architecture and furnishings to become the display a precious, flexible display of products, while the “stock wall” reveals the shoeboxes – usually concealed in back rooms – in a visible way inside the store, indicating the core business of the Bally brand: footwear.

In its various versions the screen wall, made less solid through the alternation of vertical strips, generating a see-through effect that puts inside and outside into communication. It is also a sort of “frame wall”, allowing the display of products on both sides. Thus the walls, in the various cases, besides making a continuous reference to Swiss architecture, are also inspired by the creations of certain conceptual artists like Sol Lewitt.

The second central idea of the store concept has to do with the choice of a continuous floor and ceiling: the white ceiling in resin and stucco contrasts with the gray flooring in wool-hemp carpet. The third idea involves the lighting of the space and the display fixtures, seen as a family of elements in metal tubing, where the aesthetic is soft and round, a clear reference to the invention of furnishings inspired by bicycle handlebars in curved metal tubing by Marcel Breuer.

The decorative furnishings are joined by sofas and armchairs in leather, with very intense finishes and colors, a reminder of the expressive research of Luigi Caccia Dominioni. All the spaces set aside for sales are bordered and defined by the continuous wooden wall, the white ceiling and the gray floor, while the other support spaces, the felt fitting rooms, the staircase and restrooms in Swiss Vals stone, are treated in a different way. From the outside, through the windows, a new, specially designed Bally logo acts as a three-dimensional element of attraction in terms of graphic design and lighting.

The wooden wall in American walnut whose continuous extension generates the space of the store and combines architecture and furnishings to offer flexible product displays. The entrance to the elevator is in natural brass, while the fitting rooms are in felt. (photo Santi Caleca)
Plan of the basement
Plan of the ground floor
Plan of the first floor
The Bally Gentleman’s Corner with perimeter display fixtures in natural aluminium by Viabizzuno. (photo Santi Caleca)
The Vals stone staircase supplied by Laboratorio Morseletto. (photo Santi Caleca)
Detail of the staircase with a railing covered in leather.
the service spaces, clad in Vals stone.
The fitting room clad in felt (photo Richard Davies)
#Design #Projects