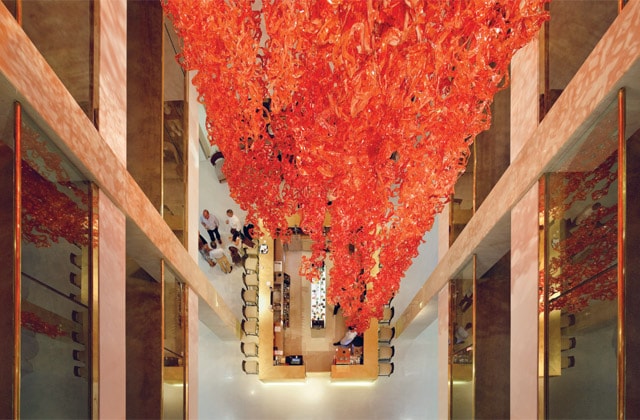 The surprise effect is in store for anyone who enters the Hilton Hotel in Barcelona, thanks to the vivid glow of the installation created by the designer-artist Jacopo Foggini that seems to float, suspended, in the lobby: an abstract figure that is transformed into an ideal of natural beauty, a bright red ‘colony of coral’ composed of tubes in translucent polycarbonate hung from the ceiling.

The work seems to change form from different vantage points. An effect of lightness and transparency, in spite of its 61 square-meter girth and weight of 800 kg. “An artistic flameburst of welcome, a tribute to the city of the creative energy of Gaudí and its masterful craftsmanship”, says the architect Matteo Thun, choreographer of the redesign of the foyer and the common areas for the facility of Hilton Hotels & Resorts, opened in 1992 for the 25th Olympic Games, while the British studio Bevis Design Associates has handled the design of the 289 rooms and suites. This lobby with its forceful character, far from the often monotonous identity of large hotel chains, stands out as a multifunctional place that deftly embodies the glocal spirit (global and local) of the Catalan capital. “I have conceived it as an iconic space, with a linear, fluid image, also in the crosssection, in the perimeter balconies that border the connections between the levels”, Thun explains, “permeated by an intense Mediterranean light that wraps open and continuous zones in total white. A sort of white canvas that can flexibly respond to different hospitality needs, for recreation or business, meetings, socializing, cultural events”. While the Cape Coral is the catalyst on a visual level, the ivory drapes that surround it, spanning the whole 15-meter height of the space, along a functional bar built into the suspended ceiling, create specific zones offering different degrees of privacy, in tune with an idea of overall comfort underscored by the careful selection of furnishings. The central horseshoe-shaped bar made with a monolithic sheet of brushed brass blends nicely with the flooring in Marmocemento Agglotech®, a composite stone in an ivory shade, to complete the theatrical setting for this “liquid space”, as the sociologist-philosopher Zygmunt Bauman might call it, capable of giving meaning to a dynamic, vital experience that generates a sequence of vivid perspectives.