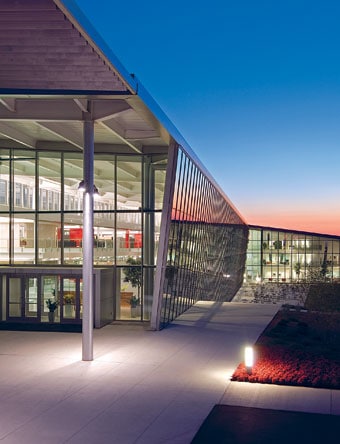 From Emilia, with a degree in Business Administration from the University of Bologna, president and CEO of Haworth, Franco Bianchi can be seen – in keeping with the definition supplied by the German philosopher and sociologist Ralf Dahrendorf – as a pertinent example of a ‘glocal’ personality, or someone who seeks new cultural compatibility between distant, different worlds.

He expresses himself in a frank, unaffected way. He believes capital movements are part of healthy globalization, and that regrets regarding changes of ownership are a sign of backward thinking. He has been seen on the front pages of Italian newspapers due to the acquisition, still in progress, of the Poltrona Frau group. After a short experience following graduation from college at Amaretto di Saronno and then at Castelli, which was acquired by Haworth, he worked his way up through the mother company based in Holland, Michigan. From vice-president for finance, data processing systems and human resources of Haworth Europe, then general manager of Haworth Italia, which he guided towards growth of 50%, in July 2005 he became president and CEO of Haworth Inc, moving to Holland with his wife and two young children. “This was a choice that required some courage,” he confesses with disarming sincerity, “as well as curiosity and a nomadic attitude. Holland, Michigan is not New York, not an international metropolis. The ways of living and working, even the way of making a joke, are different. To move to the center of the United States you have to redesign yourself. The differences are not just cultural, but also have to do with small, everyday things. You have to learn how to make yourself be liked, which means knowing how to appreciate others, to fit into the new reality. But – he warns – you also have to digest diversity, conserving your own specificity, which is perceived as an advantage if it is accompanied by successful integration.” His experience, in his early period with Haworth, with the areas of marketing and design gave him the tools and knowledge to approach the new adventure with Poltrona Frau with expertise and passion. “The acquisition on the part of Haworth of a majority share in Poltrona Frau is a strategic move,” Bianchi says. “Cassina and Poltrona Frau are very well-known trademarks outside of Italy; the fact that an Italian is at the helm of Haworth, with knowledge of the national market, is considered a strong signal of continuity, underscored by the intention to maintain the present management of the companies in the group. The operation is not just financial, but also industrial in nature, because the goal is to conserve a high degree of Italian character in administrative and productive policy. The value of the group,” he adds, “is made up above all of people, managers and designers. The fact that I am Italian helps in my relations, on all levels, with the people operating in the companies of the group.” Being an American from Italy enables him to recognize differences and to clearly identify complementary characteristics. He believes being Italian is a kind of guarantee for the management that continues to run the companies, in a context of full continuity. He is optimistic about the future of the corporation, thanks to the quality of its values and the talented people involved. “I admire the way three brands with different histories, also in terms of territory, have been put together and made complementary,” he concludes, “and I appreciate the effort that has gone into making them important on an international level today. It is essential to understand that each brand has its own independent force, influencing different markets, and to identify platforms of growth that conserve this complementary relationship of individual firms.”