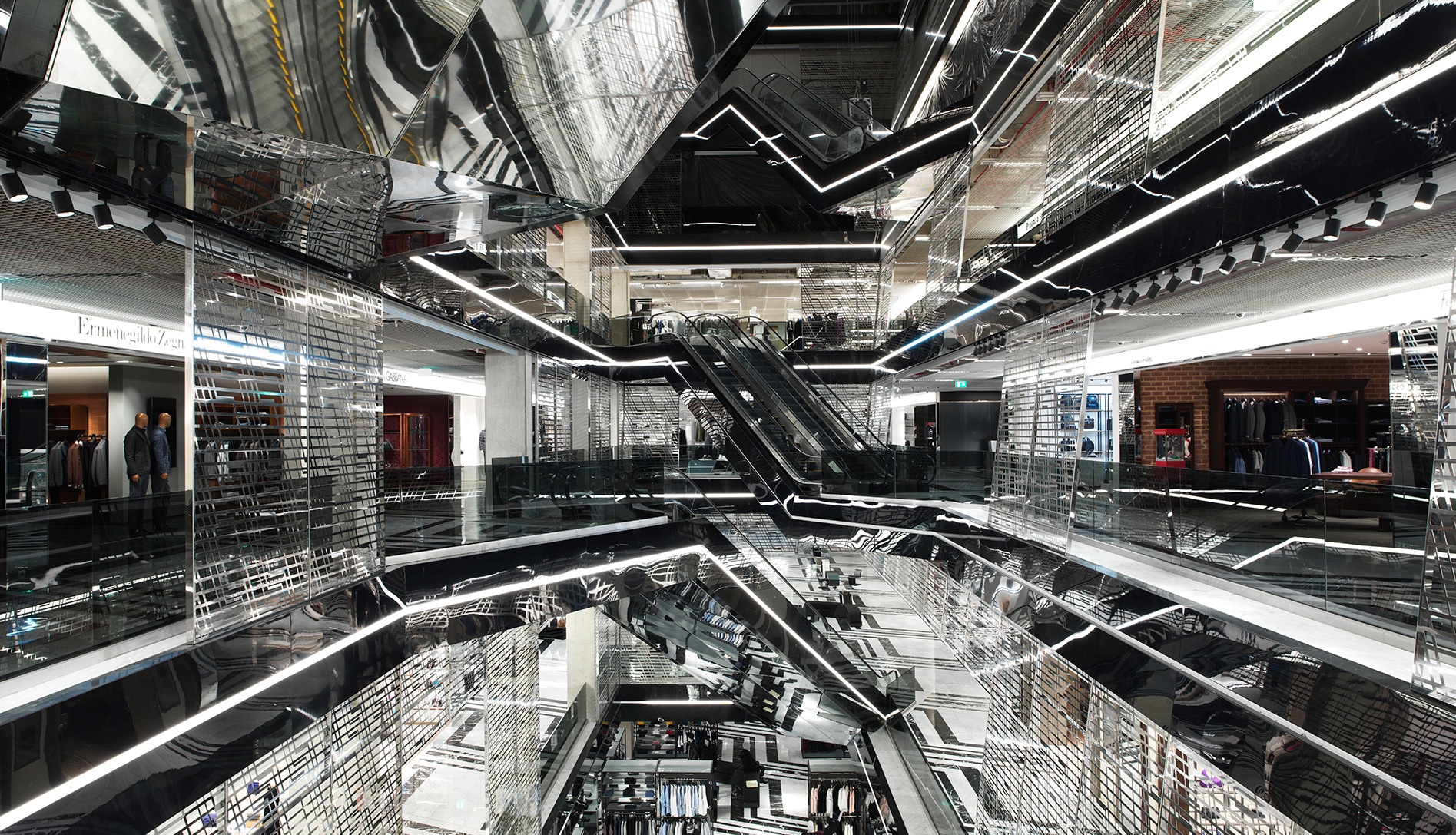 Sleeves rolled up, shoes covered with dust, Tony Salamé moves incessantly from one level to the next of what still looks like a big worksite. Less than 24 hours remain prior to the opening of the Aïshti Foundation, the exhibition space the Lebanese entrepreneur has created for contemporary art, but above all for the city of Beirut, calling on an outstanding architect like David Adjaye for the architectural structure, and a famous art curator, Massimiliano Gioni, to invent the first show. The excitement is that of a major international event.

This is not just the achievement of a personal dream on the part of one of the world’s leading collectors (over 2000 contemporary artworks gathered in just a few years). Nor is it simply a new business challenge for the man who has created the luxury market in Lebanon (the gallery is an integral part of a multifunctional building of 35,000 square meters that combines cultural and commercial functions, focusing on the world’s most famous luxury brands).

For Tony Salamé this is above all a new story for his home town, which has still not been able to heal the wounds inflicted by civil war, to overcome fear. With this new institution, destined to be a point of reference for the entire Middle East and the rest of the world, the city emphasizes its aim of returning to an international role of visibility.

Tony’s energy and enthusiasm are contagious. While he checks on the work that still needs to be finished, giving orders, examining details, putting things in order and cleaning, he tells us about his project, his adventure. And the fundamental role of Italy in this tale, starting many years ago.

“Everything I am, and what I do today, I owe to a trip to Italy with my family when I was 13 years old. That was when I discovered my passion for Italian fashion, and Italian style in general, made of history, art, architecture, food, a taste for high quality of life. Though I was still very young, I already had an intense interest in clothes.

I liked to search and discover different things, and Italy gave me a chance to do shopping in an original way. After that trip I was left with the desire to return to Italy and to do something in connection with this splendid country. The first time I went back, on my own, I was 18; I went to the university and began working a little, so I used my earnings to buy clothes.

My friends in Beirut liked them so much that I wound up selling them, so I got into the habit of taking vacations in Italy to buy things, during the period of the sales. I would then sell the garments in Lebanon. In 1990 I opened my first boutique in Beirut, and my ties to Italy became even stronger.”

What was a small boutique exotically named Aïshti – “I love” in Japanese – is now a reality that includes 37 monobrand stores in the heart of the Lebanese capital, and by the end of 2018 should feature a department store of 20,000 square meters built in the area of the old souk destroyed by the war, with architectural design by Zaha Hadid.

In the meantime, with the Aïshti Foundation – a large volume wrapped in tubular skin of red aluminium whose geometric patterns are a tribute to the mashrabiya, the typical grating of Arabian architecture – Salamé is experimenting with an innovative retail formula, which combines commercial functions with a museum, along with a series of activities and services: seven restaurants, cafes, a large spa, a rooftop swimming pool and outdoor recreation facilities.

The image developed by David Adjaye for the large building clearly distinguishes between the area of the shops and that of the gallery: the former is based on compositional dynamism, shiny materials, black and white floors for an optical effect, matching the graphic matrix of the facade; the latter, with the rugged austerity of concrete and an emphatic succession of spaces, sets out to make large artworks the protagonists, in an atmosphere of contemplation and silence.

Entitled New Skin, the exhibition curated by Massimiliano Gioni narrates, through a selection of works from the collection of Tony Salamé, how Italy influenced the great love of art of this entrepreneur.

“It all began in the early 2000s,” Tony explains, “thanks to an encounter with Dino Facchini, the owner of Swinger (the Byblos brand, ed.). Dino loves Arte Povera, and he passed that passion on, helping me to make my first acquisitions: works by Manzoni, Fontana, and then Adami, Nespolo.

In 2006 he introduced me to Jeffrey Deitch, the famous art critic and art dealer, with whom I put my collection into focus; he was the first to tell me that sooner or later I would open a foundation, given the pace and the passion with which I was buying art. As this idea took form in my mind, I also became more interested in other Italian artists, like Giuseppe Penone and Michelangelo Pistoletto.”

But the goal of the foundation is not just to offer to the public a private artistic legacy of great value that deserves to be shared. The focus is also and above all on Lebanese artists, offering a platform for discussion and interaction, between themselves and in relation to Western art.

“My objective,” Salamé concludes, “is to make the foundation contribute to putting Beirut back on the international map of culture and tourism. Lebanon has many traditions, museums, tourism sites, but they are not sufficiently appreciated because people are still afraid to come here.

At the same time, the people of Beirut will discover a new place, for shopping and entertainment, but also to stay in touch with what is happening in the contemporary world of international art and culture. I hope all this will help to communicate a new image of my country in the world.”