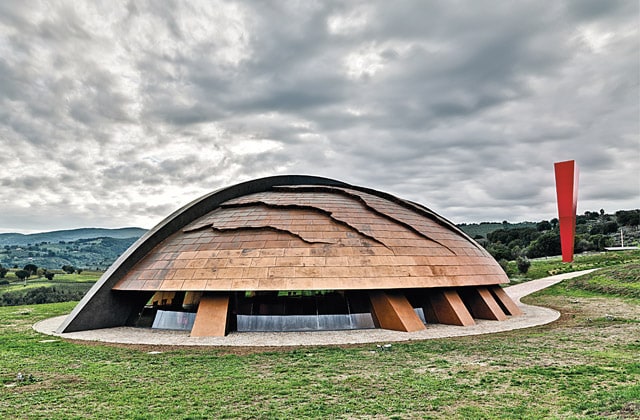 “For me, this project represents a completely new experience, because it involved making a work that is both architectural and sculptural.

The estate is immersed in an extraordinarily striking natural setting, a reminder of the landscapes seen in Renaissance paintings, not unlike the places in Montefeltro, where I was born. My project had to avoid disturbing these gentle hills, where the vineyards are the main feature. I got the idea of a form like a turtle, a symbol of stability and longevity, whose shell represents the union between earth and sky”. This is how Arnaldo Pomodoro, the master of contemporary sculpture, narrates the genesis of the work, the result of a long relationship of friendship with the client. The Castelbuono estate (30 hectares of vineyards in the townships of Bevagna and Montefalco) is an expression of the project of the Lunelli dynasty, at the helm of Cantine Ferrari for three generations, to construct other wineries outside the Trentino region, in which to create still wines that share the excellence of the famous sparkling wines of Ferrari. The appeal of an ancient land like Umbria was strong, along with the native variety of grapes, Sagrantino, unique for its strength and longevity, mentioned long ago by Pliny the Elder. Influenced, perhaps, by the cultural and natural virtues of the place, the winery now stands – after six years of construction – as the result of painstaking cooperative work, of harmony between different skills, as in a Renaissance workshop. There were practically no technical drawings or blueprints, and certainly no renderings. Everything came from a sketch, almost like those of Leonardo, in which Pomodoro represented his idea of the turtle, which was then translated into a sculpture- model on a scale of 1:20, then gradually enlarged, with every detail developed in terms of spatial expression. The Trentino-based architecture studio of Giorgio and Luca Pedrotti had the task of mediating between artistic utopia and concrete functional quality, of translating sculptural features into construction, encoding the literally shaped architecture to fit the technical canons of design. The carapace is an enormous ovoidal dome of 2500 m3 (the large central rib is 35 meters long), with a structure in lamellar wood. From the outside, the winery seems to emerge from the terrain like some mythological beast, whose copper armor is breached by cuts that are reminders of the furrows of the earth, from which matter flows, like hot lava in the act of becoming solid. A cornerstone of the artistic lexicon of Pomodoro, always in pursuit of the ‘inside’ through the tormented rupture of the material. A red lightning bolt that pierces the terrain indicates the work, camouflaged by its curved profile that imitates the gently rolling Umbrian hills, with their vivid earth tones. The interior is a triumph of sculptural expression, with dramatic overhangs, ribbings, hard and angular forms enhanced by the materic copper finish, “to obtain a deep, calm reflection”. This effect is also generated by the lighting design by Barbara Balestrieri, produced by Osram with LEDs, combining the needs of environmental and artistic lighting to accentuate shadows, reveal sculptural signs and interpret the poetics of the artist. The jagged looming presence of the carapace, inside (in a zone for reception, exhibits, tasting and sales) is the metaphor, in sculptural form, of the character of Sagrantino: a well-structured wine, rugged, strong and long-lasting. The interior, full of tensions, is balanced out by the grace of the surrounding countryside, in a 360-degree view. The cellar, a dark, humid underground space par excellence, has been altered by the artist to contain an ascending tension: moving down into the depths, the colors get more ethereal, the atmosphere gets lighter. A spiral staircase conceived as a symbolic Zigurrat clad in Cor-ten encloses the tasting area and leads to the barrique room. The walls and ceilings in sky blue make the space seem like a sort of paradise, where the barrels seem to float in an almost mystical, calm setting. One of the places Jay McInerney, author of several wine books, would call a “sanctuary for pilgrims of the palate, hedonistic devotees in search of the next ecstatic revelation”. Which is just as sensual as it is intellectual.