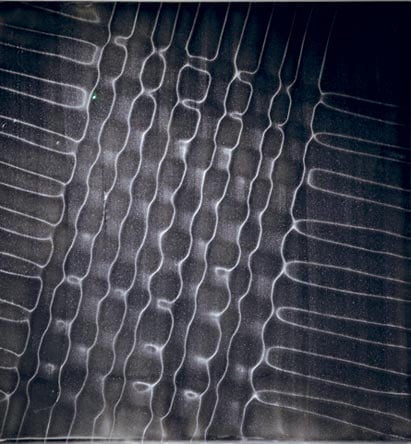 Shuffling the cards, it makes hybrids of production sectors, in search of unexpected alterations of materials or defects that become unique. The whole idea is to bring out the intrinsic qualities of materials. Working on the production process, beyond mere usage function and object types, to bring out unexpected aspects of materials is an approach shared by two distant projects: Alteration by the Dutch designer Kirstie van Noort, and Magnetic Fields by fellow Dutchman Tord Boontje, residing in London. The first attempts to prompt observation, to make us linger over the tactile and visual qualities of material. Porcelain vases made by hand with multiple color layers are subjected to controlled mechanical scratching that removes microlayers of the material. The slight difference in thickness of the layers, since they are applied by hand, triggers variable and multicolored surface effects that constitute the unexpected beauty of the project. Tord Boontje, on the other hand, creates patterns through magnetism. This is an experiment he has been conducting for three years now, trying to get control of the process. He uses sheets of resin, or surfaces covered with resin, whose ions are polarized by the passage of electricity inside circuits with which they are in contact. The process can also be applied to thin layers or fabrics, like the rubber coatings used to finish textiles. These are not surface treatments, but patterns inside the thickness of the material itself. This is why the panels have an unusual three-dimensional quality, and mysterious depth. A sort of revisitation of traditional production processes is also involved in the project Woven Songs commissioned by the Zuiderzee Museum, to combine music and weaving. The Anglo-Dutch studio Glithero (Tim Simpson and Sarah van Gameren) has come up with a cross between the distant worlds of the weaver Wil van den Broek and the builder of organs Leon van Leeuwen, by observing their respective machinery. The mechanics of an organ and those of 19th century looms are actually very similar: both are controlled by means of punchcards that indicate the points in which to make the holes, to insert the pegs of the loom, in one case, and to control the pipes of the organ, in the other. The punchcard of the latter is thus used with a Jacquard loom to make fabrics, which become relics of a know-how threatened with extinction. Materialism, by the Dutch duo Mieke Meijer and Roy Letterlé, investigates the relationship between working techniques and materials. The studio has made a series of twenty flat sheets in ceramic, glass and metal, of the same size. Workshops of ceramists, glassmakers and foundries have treated the different materials with crafts techniques: the materials have been subjected to high temperatures to bring them to a plastic state, then poured in moulds open on one side, and then treated with gas or other finishing techniques. These are ways of working usually done in an industrial context, but the fact that they are done by hand makes them unique. The form of the mould itself reveals the characteristics of the material, such as tactile roughness, which would not be visible using a more industrial production process. Recycling lies behind the Fossils project by the Israeli designer Shahar Kagan. The collection comes from the dirtiest places in factories using polyurethane-base paint, which are usually forced to discard paints in open vessels at the end of the daily production cycle. The designer asked them to pour the paint leftovers into a specially constructed mould, where over a period of six months blocks of material have formed, weighing 4.5 kg. When sliced or cut into 3D volumes with laser machinery, they produce layers with always different patterns, thanks to the multiple colors, the unpredictable effects of the accumulation, the humidity and the hardening. Transformed into panels, the solidified paint becomes a facing for furnishings in MDF. Cork, but not the way we usually think about it. Belgian designer Cédric Etienne builds bricks with granules of recycled pressed cork to make furniture. The modular system requires not bolts or glues, so it is very flexible and reversible. The material seems like a nobler version of MDF and has an unusual lightness, insulating properties and excellent stability over time. Corkinho fits with the ‘cradle to cradle’ principle, a design approach that adapts industrial models to nature, enhancing environmental compatibility. The project also points to new opportunities for the Portuguese cork industry, which has been going through a period of crisis. The modus operandi of the Dutch designer Pieke Bergmans is precisely the alteration of existing production processes to achieve unexpected aesthetic results. Controlled imperfection is found in all his projects, including Vapor, a series of lamps in blown plastic. Some are suspension lamps, six meters high, in material so thin that it seems like tracing paper. Others are made with a technique similar to that of blown glass, but due to the characteristics and sizing of the extrusions they have a form that is always different and uncontrollable. The plastic parts of different thicknesses reflect the light inside in different ways.