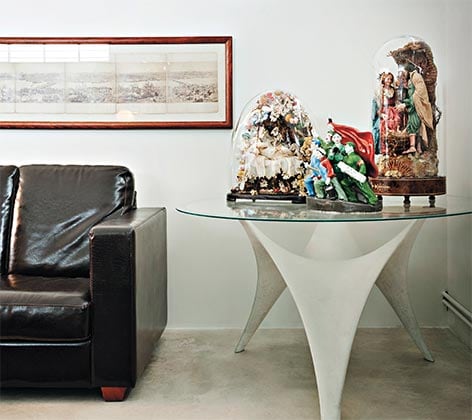 An expert on technoecology, sustainability and alternative energies, Mario Cucinella has won many prizes and honors, but above all he has created important buildings, like the office building of the City of Bologna (2008), the 3M headquarters at Pioltello (2010) and the office complex on Via Santander in Milan (2012).

His path of life has followed his career: he studied in Genoa with Giancarlo De Carlo and then worked in the Renzo Piano Building Workshop, both in Genoa and Paris. Which was where, in 1992, he founded his own studio, MCA Architects, which moved to Bologna in 1999. A visit to his new home in that city, a loft in the working-class district known as Bolognina, sheds light on his personality, demonstrating that he is rather allergic to polished spaces, and enjoys unexpected combinations and métissages. Inhabited by objects gathered in different places and times, the house immediately seems like a space already filled with the layers of time, a sensation usually reserved for places that have been lived in at length. In keeping with his belief in sustainability, Cucinella uses all the energy systems that make it possible to produce more than you consume: a heat pump powered by a photovoltaic system (panels by Fabbrica del Sole), a rainwater recovery system, and very efficient insulation – 14 cm of glass wool – produced by Saint-Gobain by recycling work scrap. In this case, unlike other projects, the sustainable aesthetic is concealed, because Cucinella wanted to restore the industrial identity of this 1970s building, the terse essence of its spaces and structures. The surface of the floor, below which radiant heating panels are hidden, is made with industrial quartz cement, while the walls expose their original bricks, covered with a protective transparent film, while the ceiling also remains as it was, in brick with cement ribbing and iron ties, for a classic factory look from the last century. In this conservative approach one important point is the design of the casements, which have to reconcile thermal sealing with the original image of glass panes held in place by slender iron posts. Cucinella decided to design the new casements himself, having them made by hand, with steel sections, visible welding and a transparent coat of rustproofing. “For me, today, it is unthinkable – Cucinella explains – to live in a traditional flat where each function corresponds to a separate room”, and in effect the living spaces is absolutely unified and fluid, even extending beyond the perimeter of the building to occupy an external patio with a lounge/winter garden. The furnishings, selected with the help of Chiara Castelli Casa, blend modern vintage, especially the sofas and armchairs, with collectable fragments, like nativity scenes or stuffed animals, objects of affection like a Moto Guzzi bought when the architect was a youngster, and an oil painting of his grandmother; then there are found objects gathered around the world, like Chinese propaganda statuettes and a Jericho rug, or a military tarp hung on the wall that looks like a work by an American minimalist. Signature pieces include the Arc table by Norman Foster and a few historic items: the timeless Lounge Chair by the Eameses, and the legendary A Chair, which Cucinella says was the first stackable chair in the history of modern design.