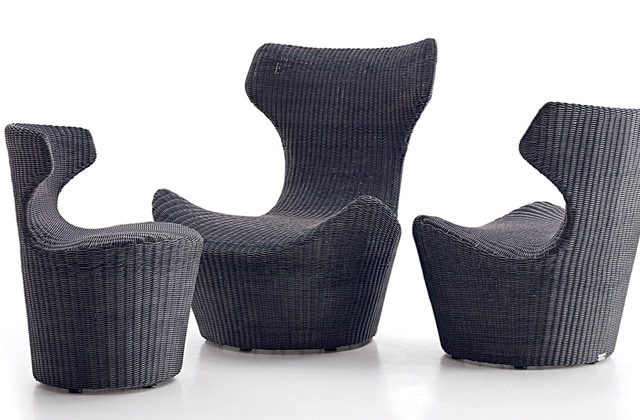 This is the story of a project, which like all successful designs did not happen by chance, but thanks to the positive encounter between the intuition of a designer and the ability of a company to grasp its visual, typological and materic potential.

The designer is Naoto Fukasawa, the company B&B Italia, and the project is the Papilio seat, created in 2008 as a chair, then adapted as an armchair in 2009, leading to a whole seating family that now includes, in January 2013, an outdoor collection that updates the material image of the original product while conserving its forceful image. The chair reflects all the most representative traits of the personality of Naoto Fukasawa: extreme linear figuration, but also the reference to the world of nature, expressed here in the wings of the back and the seat, like those of a butterfly. What might seem like a stylistic approach oriented towards minimalist organicism is actually a vision of design that is the diametric opposite of pure aesthetics, paying more attention to the behavior of people than to the forms of objects per se. In 2005, at the time of his debut in the world of Italian design, Fukasawa explained it as follows: “More than the reaction of the eye and the mind, I care about that of the body, which is always a longer process. I am not interested in designing forms; I am interested  in designing behaviors, in developing an idea of design that always starts with the study of the unconscious and acts on behaviors, almost dissolving in physical terms” (Naoto Fukasawa: dare forma all’inconscio”, Interni no. 550, April 2005). The concept of the Papilio seats comes precisely from observation of the act of sitting in relation to the surrounding environment: “What sets the design of Papilio apart”, the designer says, “are the wings that extend at the sides. In the dining room chair or the small armchair these wings function to support the sides and the back, almost like hands that embrace and support the upper part of the body. This is the sensation they create, accentuating the comfort of the seats. The Grande Papilio armchair, on the other hand, wraps the area of the head. It offers the sitting person some protection from noise, a sense of tranquility”. It was not so obvious to translate this idea into a monomateric form of great iconic impact, destined to be reworked in multiple versions, sizes and materials, which also make this line of products a success in the field of contract today. When Fukasawa presented the design to B&B Italia the chair had a different configuration: there were enveloping wings, but it called for a slender metal structure that created a vivid contrast with the size of the chassis. The intuition of putting on a ‘skirt’ and transforming the piece into a monolithic seat came from the company, which in a fertile relationship of collaboration with the designer developed the formal solution (sculpted in a fluid way inside an overturned truncated cone) and supplied the technological knowhow to make the item with polyurethane foam. Presented uring the Salone del Mobile in Milan in 2009, the armchair met with immediate acclaim, and in just three years it became a family, including two armchairs of different sizes, a small two-seat sofa and a hassock. The simple lines are enhanced by two functional details that become characteristic elements of the seats: the metal zipper on the back that permits removal of the cover in fabric or leather, and the rotation system that lets the user swivel 360 degrees, for a direct relationship with all surrounding space. Here we can see the expression of Fukasawa’s idea of a “design without thought” and “design dissolving behavior”: he sees simplicity as a tool to reach completeness and to achieve a harmonious relationship between object, user and environment. He believes the true goal of the designer is not to always invent new things at all costs, but to improve things that already exist, designing objects that in their normality seem to have always been a part of our everyday lives. For this reason, talking about Papilio and the new outdoor model presented in January 2013, Fukasawa speaks of a project that has evolved in a very spontaneous way, shifting outside the walls of the home due to a shared desire. The development happened thanks to the experience already gained by B&B Italia in the outdoor furnishings sector. In 2007 the company called in Patricia Urquiola to design the Canasta collection, setting a new product standard, where polyethylene, which was used at the time in dense weaves, was instead deployed to reproduce the geogeometric pattern of caned chairs, on a bigger scale. The same material is now used to cover the new Papilio, which conserves its original monolithic look but, thanks to the weave, also takes on a more natural, light, materic image, with a reminder of fine craftsmanship. The result achieved thanks to collaboration between the designer and the B&B Italia research division has been such a hit that a similar woven version will now be offered for indoor use as well. So the flight of the butterfly goes on, delicately and elegantly conquering different zones of our everyday life.