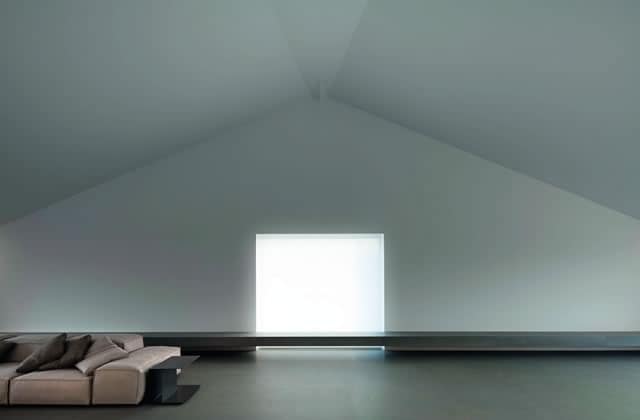 A sort of apt volumetric extrusion, where interior spaces open on all sides toward the surrounding greenery.

A detail that should not be overlooked: this is house that qualifies for the Casaklima Gold category. Encased by a new garden composed of large grassy parterres and groups of new oaks, the “Casa delle Bottere” (the name comes from the road where the craftsmen who made oak casks for the conservation of wine once had their workshops) is an elegant, recognizable architectural presence, a regular form that emerges from the green meadows thanks to the white finish of all its surfaces, including the roof clad in stone, with pieces of different sizes. This particular tectonic feature of the project, underlined by the materic shift between the roof and the base on which it rests, gives character to the composition as a whole. The western facade is a reminder of the harmonious shape of the many rural constructions in the zone, with double pitched roofs and a central peak; but the extension of the roof toward the opposite side, to the east, makes the projection of the peak coincide with the ends of the facade, transforming it into a ‘flat roof’ in a descending movement of perfect geometrical synthesis. This unusual and very refined profile, aligned with the horizon of the Venetian Pre-Alps, forms a relationship with the volume below, bordered to the east by the swimming pool next to the lawn, flanked by a recessed courtyard, and to the west by the sloping access to the garage. The entrance to the house from the lawn is located along the southern side, where the overhanging roof forms a continuous portico faced by the rhythm of openings, concluding in a solid wall corresponding to the linear front, in which the roof tapers and flattens along the eaves line. The two ends have only one central opening, aligned to form a visual channel that crosses the whole construction, encountering a patio at the middle that contains the staircase connecting the two levels and divides, on ground level, the bedroom and living areas. The latter faces the recessed courtyard, with a large living space from which the circulation route begins, joining the two symmetrical openings at the ends. The perspective view is paced by the thickness of the internal volumes, also underscored by a subtle setback of the bedroom doors, emphasizing the value and presence of the masonry around the spine of reference of the overall layout. In the living area a horizontal fireplace sculpts the internal wall in a linear way, corresponding on the symmetrical surface to a niche of the same length that contains a wooden bench, conceived as an architectural element and part of the lucid grammar of the project, like all the other custom furnishings. A habitat syntax of absolute formal purity, matched by the care taken in the design of the physical plant elements, to minimize environmental impact (geothermal probes provide heat, without combustion). The absolute image of the volumetric enclosure conceals radiant ceiling panels for summer cooling, and heating elements embedded in the floors.