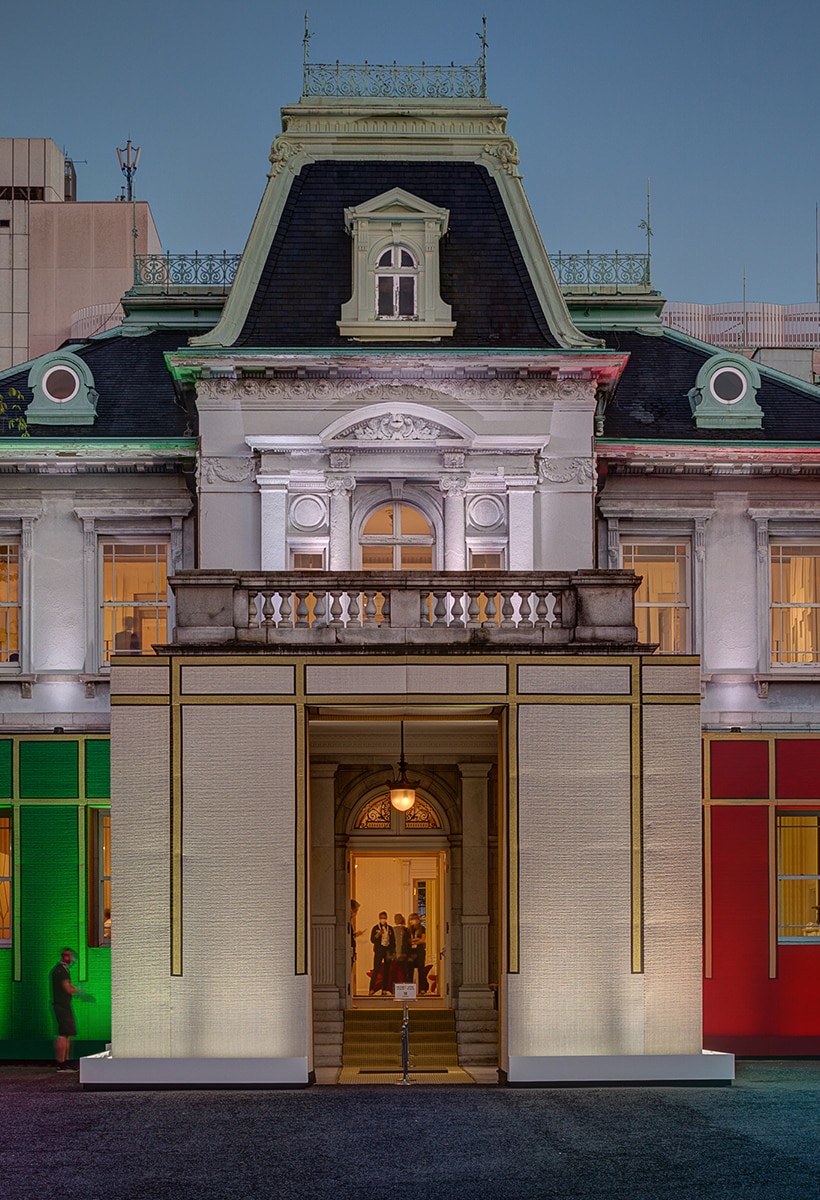 The Wonder of Casa Italia at the Tokyo Olympics

The Wonder of Casa Italia at the Tokyo Olympics

Art and design, sport and nature - charm and amazement - for Casa Italia at the Tokyo 2020 Olympics. Housed in an Art Nouveau building in the Minato district, the project for the meeting place of Italian athletes in Tokyo a path between Wunderkammer, the rooms of wonders

The West meets the East in a project, that of Casa Italia, which wants to restore the Mirabilia of made in Italy, promoting Italian excellence, in sport but also in art, design and lifestyle.

Meeting place of Italian athletes for the Tokyo 2020 Olympics, scheduled from 23 July to 8 August, The Kihinkan - Takanawa Manor House is a building with an early 20th century Art Nouveau architecture, located in the Minato district, in about 10 kilometers from the Olympic Village and the Main Press Center.

The Casa Italia Mirabilia project, curated by Claudia Pignatale (from the secondome art design gallery) and Beatrice Bertini and Benedetta Acciari (from the Ex Elettrofonica art gallery), interprets the concept of wonder as an authentic sensation that allows you to enter - for a few magical moments - in a state of empathy with the whole. The wonder thus becomes the point of contact between Italy and Japan.

According to Plato, wonder is at the origin of wisdom: “It is precisely of the philosopher that you feel, that you are full of wonder; philosophizing has no other beginning than this” Platone, Teeteto 155 d.

But it is Aristotle who gives the most complete definition: “In fact, men began to philosophize, now as originally, because of wonder: while at first they were amazed at the simplest difficulties, later, as they progressed little by little, they came to pose more and more problems: for example the problems concerning the phenomena of the moon and those of the sun and the stars, or problems concerning the generation of the entire universe” Aristotele, Metafisica, 982b-983.

Ph. JIL-Studio
The term Mirabilia is here a reference to the rooms of wonders (Wunderkammer) in which, between 1500 and 1700, collectors gathered pieces of art (artificialia) and natural objects (naturalia), preserving them together and showing them without placing hierarchies between them. or any difference. The objects were indistinctly called, in fact, mirabilia, in other words "wonderful things".

Casa Italia was conceived as a universe that collects, preserves and exhibits the "wonderful", with a contemporary language capable of enhancing nature, traditions, art and sport at its highest levels.

The Kihinkan - Takanawa Manor House stands out for the typical architecture of European houses of the late 19th and early 20th century. Spread over two floors, inside it is configured in a series of rooms linked together, each characterized by the presence of a fireplace and a precious decoration on the walls. The reinterpretation of each environment, which respects and emphasizes its peculiarities, gives life to a succession of Wunderkammer in a path full of mixes, suggestions and charm. 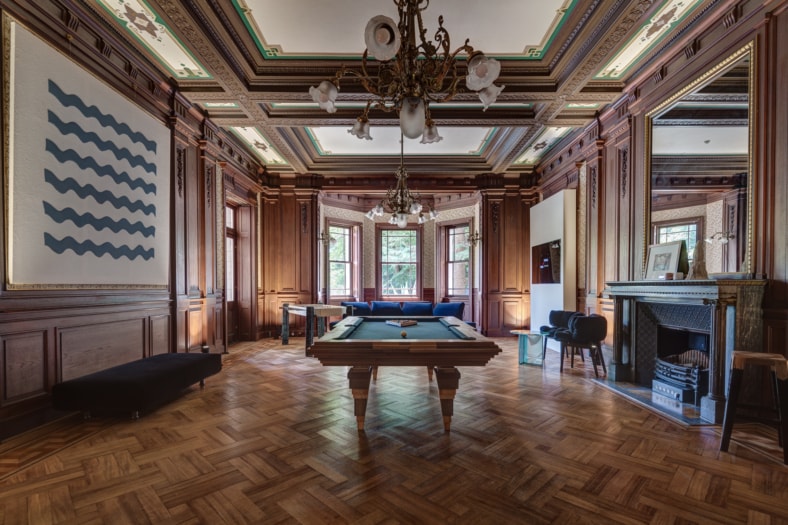 The path starts from the facade of the building covered with a 430 m2 tapestry made by Bonotto with 500 kg of yarn obtained from the recycling of plastic bottles. The tricolor inscribes the structure of the typical Japanese house in gold, celebrating the encounter between the Italian flag and local culture.

In a project with a great impact that mixes numerous works of contemporary art with design pieces, all made in Italy. 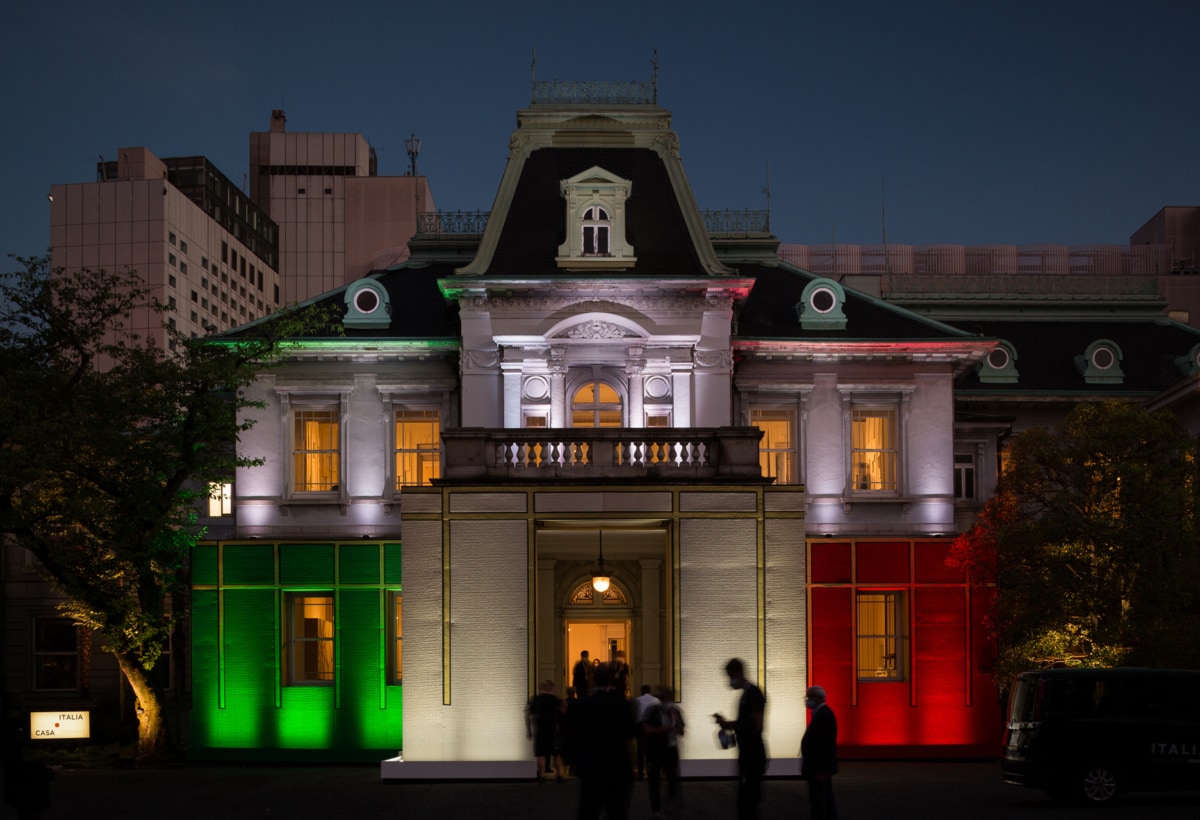 To welcome in the hall a 'flowery' installation of Rose Chair and Getsuen armchairs, inspired by the lily, in red velvet, which celebrate the Japanese art of ikebana. Designed in 1990 by the Japanese designer Masanori Umeda, the seats are a tribute to the land of the Rising Sun and at the same time to the Italian company Edra.

Next to the staircase, Bonotto's 7-meter high Atlas tapestry stands out, which mentions all continents in a sort of extraordinary journey into the cultural melting pot that characterizes our era, making us all inhabitants of a single space-territory. The corridor is also covered with a work by Bonotto, Garden Colibrì, created on wallpaper by Wall&Deco. 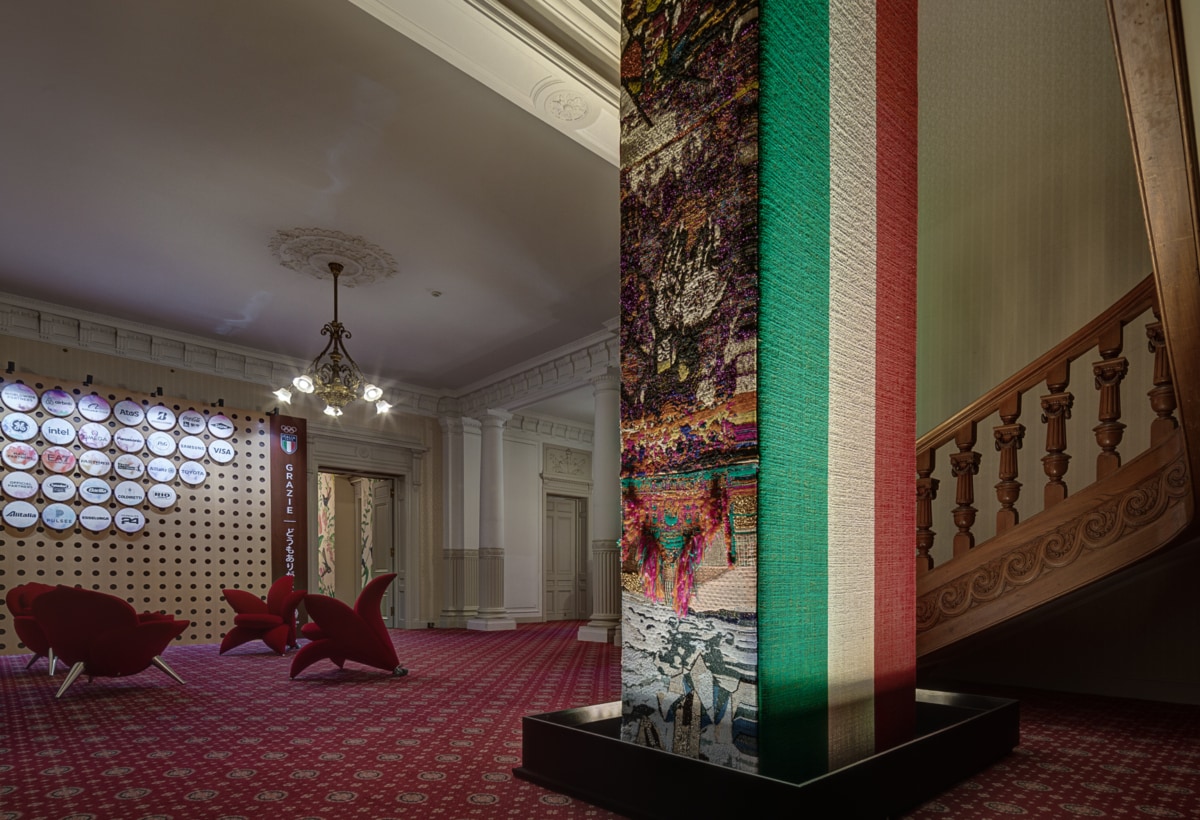 Featuring a bow window, the first room amplifies the illusions. Elisa Sighicelli's works are emphasized by a mirrored floor on which she emerges. soft and sinuous, the unmistakable Boa, the historic sofa designed by the Campana brothers for Edra, framed by Rose Chair and Getsuen. And the mirror itself is the leitmotiv of the ground floor. A game of reflections created by the works of the artists Goldschmied & Chiari, four mirrors that portray synthetic landscapes, invites us to reflect on the theme of sustainability.

In the garden, however, the wicker swings designed by Matteo Thun for Ethimo give a privileged view of the installation The Heroes of Giuseppe Gallo, twelve sculptures in which small tree trunks are transformed into gigantic chairs. Here the concept of wonder resides in the verification that every human invention – represented by the chair – is generated by nature and underlies its rules. 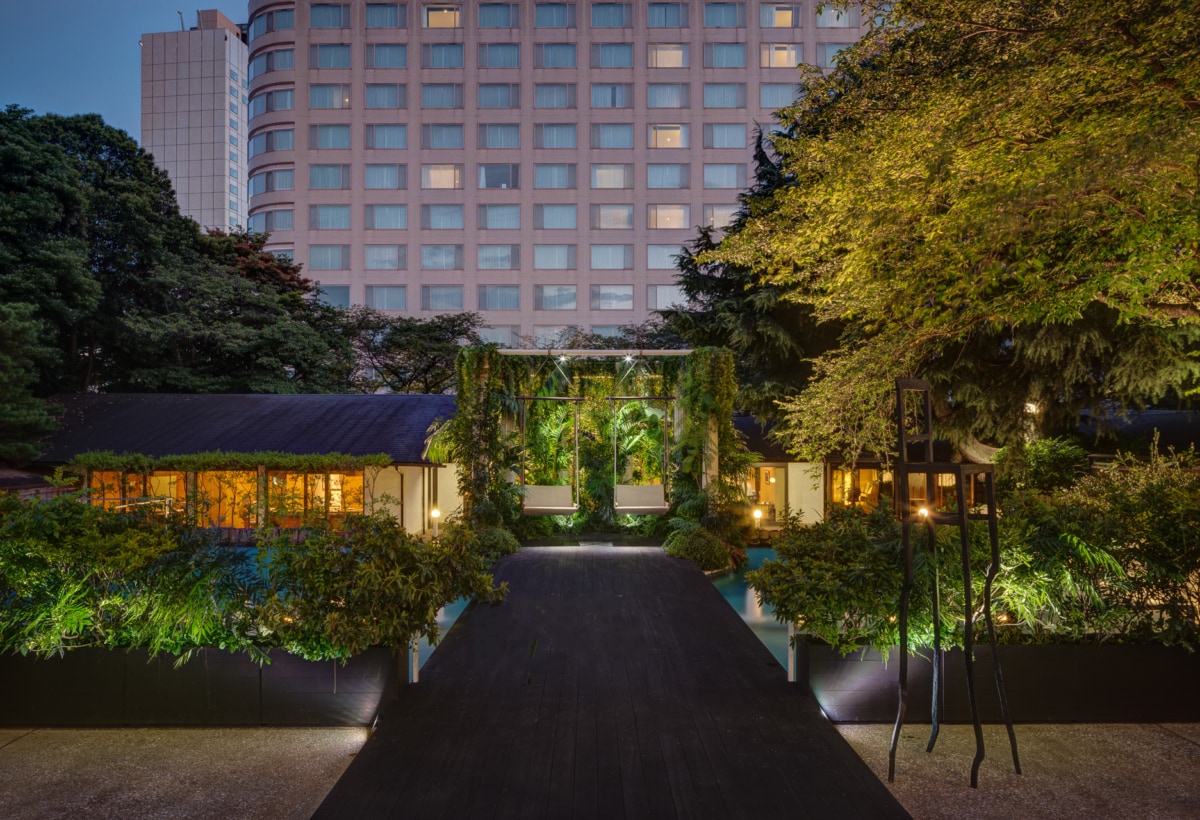 The third room is covered with a dark wood paneling in which a large fireplace is embedded and decorated with the work Surfacing by Ornaghi and Prestinari. Among the Essential sofas, designed by Francesco Binfarè for Edra, which support the plan of the bow-window, the Liquefy coffee tables by Patricia Urquiola for Glas Italia e and The Theater Hayon ceramic sculptures designed by Jaime Hayon for Bosa, stand out the tables game designed by Hillsideout studio.

The sculptural Pool Table, made with a mix of woods from Italy and the Amazon, is a billiard that wants to represent, in its irregular and layered shape, the complexity of the Amazon rainforest. The Pirlì table football, a majestic, significant and at the same time functional piece, is instead made with the colored woods of Hillsideout and the lost wax bronze of the artist Michele Balestra. 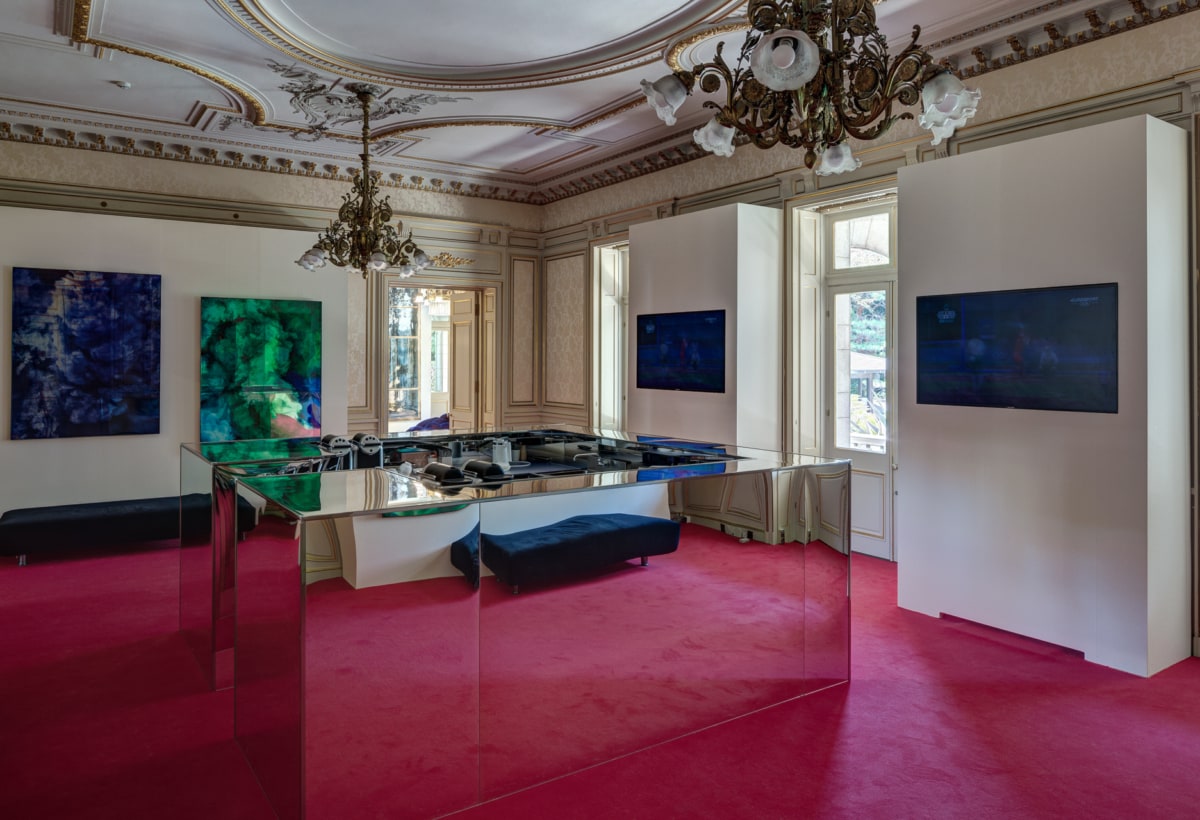 The Casa Italia restaurant is divided into the rooms on the first floor, announced by the neon work of Giuseppe de Mattia Fruit and vegetables, a sort of homage to the richness of the Mediterranean diet.

The walls of the main rooms are covered with panels made ad hoc in Alcantara, which reveal the original paper that once covered the house. The environments in green-blue tones are furnished with the Starlight crystal tables by Glas Italia, designed by Tokujin Yoshioka, also author of the Olympic torch for the 32nd edition of the Olympic Games. The setting is completed by the Gilda B. chairs, in the blue version dedicated to the Italian team, and, in the last room, the Gina chairs, in a mix of special shades that refer to nature. Both chairs with a transparent and iridescent texture in polycarbonate are designed and handmade by Jacopo Foggini for Edra. 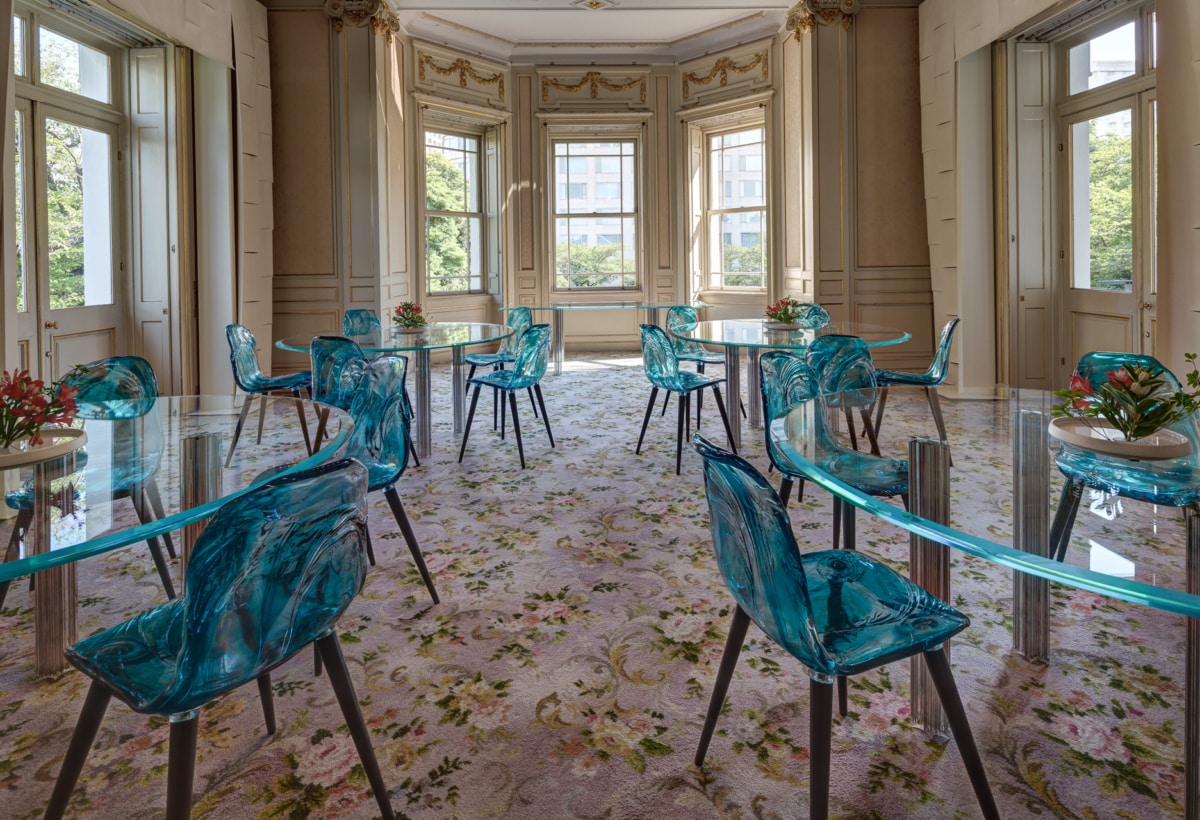 The restaurant extends into three other rooms. To frame the large tables in natural solid maple, a wood typical of the Rising Sun, made ad hoc by Studio Effe based on a design by Leftover and the Alcantara panels, made on a design with overlapping vertical cuts, which create an idea of movement and overlapping . The setting is completed by the Impossible Wood chairs by Nipa Doshi and Jonathan Levien for Moroso, a conceptual reinvention of an injection molded structure that preserves the visual and tactile qualities of wood.

Finally, in the large corridor, under a sky of Nuvem lamps by Miguel Arruda for Slamp, a sort of dreamlike dining car has been created, in which the panorama is represented by the Somewhere wallpaper by Silvia Stella Osel for Wall & Deco.