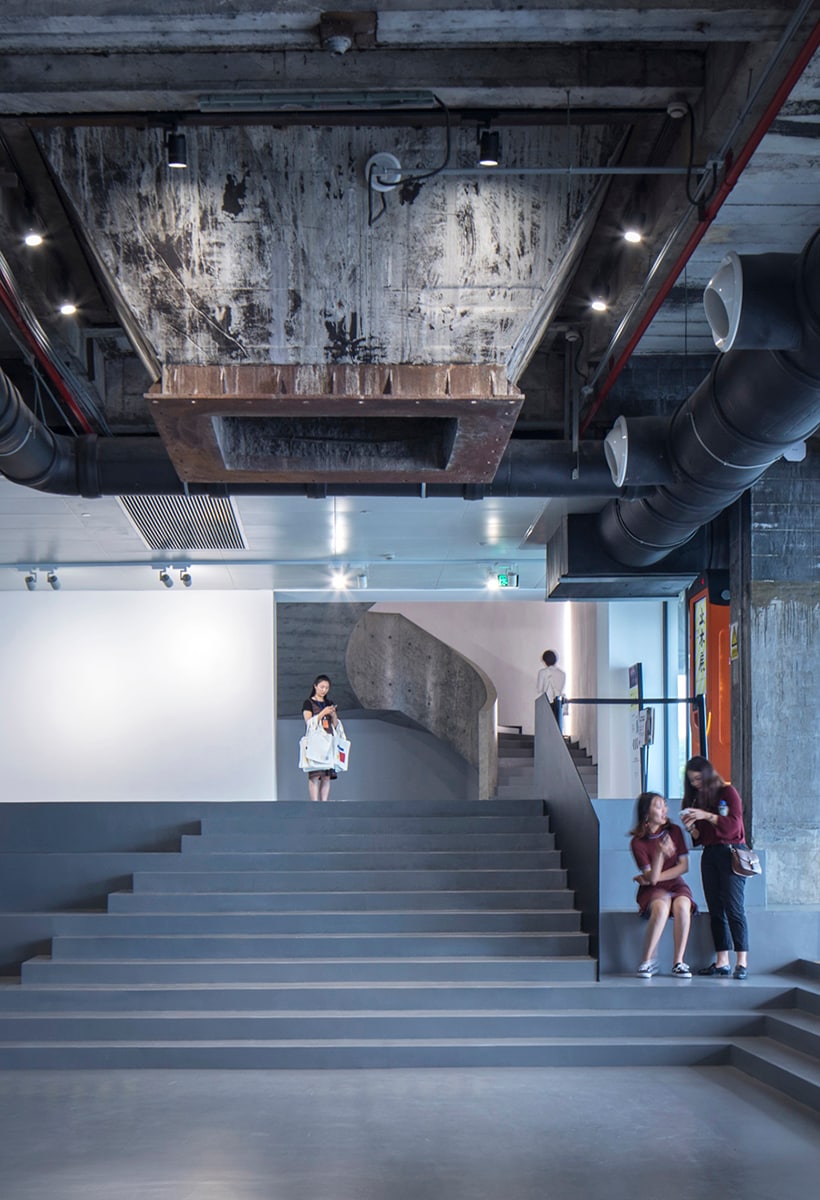 An exclusive encounter with the architect Liu Yichun becomes an opportunity to take stock of the recent projects of Atelier Deshaus, which mark a breakthrough for the architecture and the identity of contemporary Shanghai. In terms of systematic protection of historical traces

For about a decade, in the wake of Expo 2010, Shanghai has gone through a phase of extensive transformation of the urban territory that involves the regeneration of many abandoned industrial zones. Worksites have sprung up in the center, constantly updating the skyline. Others are along the river that crosses the city for dozens of kilometers, and fill up the empty spaces created on a new street map that was already waiting for their insertion.

Billboards triumphantly display (virtual) images of what we will see in a few years. For the moment there isn’t much traffic. Mechanical arms, cranes and bulldozers move behind the barriers of construction sites, in a constant din of deafening noises at all hours of the day and night. One crosses very long stretches of construction to reach the new spaces for contemporary art, which have also grown in number.

°
Founded in Shanghai in 2001 and working throughout China, Atelier Deshaus currently comprises partners Liu Yichun and Chen Yifen both of whom graduated from the Faculty of Architecture, Tongju University. The designers began by creating mainly public buildings and housing which brought them international recognition and numerous awards such as Business Weeks/Architectural Record China Awards, WA Chinese Architecture Awards and FAR EAST Architecture Awards. Familiarizing themselves with the location and embedding it in memory is a key element of their design process. In the practice’s projects, many of which are in Shanghai, China’s past and history of architecture are linked to the present, in an attempt to better understand contemporary concepts.

Many of them are in old industrial structures that are ideal of such new uses. Silo Hall at Minsheng Wharf is one of the most extraordinary: an imposing concrete building composed of 30 eight-story silos, once the largest in Asia. It has recently been transformed by the architecture firm Atelier Deshaus to create a very striking exhibition space, and at the moment it is used for temporary exhibitions and events. In May it was the location of the Prada spring-summer 2020 fashion show, with a spectacular installation of lights by OMA/AMO.

From the outside, the conversion of the silos is revealed by just one big feature, the overhanging glass volume of the staircase that diagonally crosses the whole facade and rises up to the exhibition spaces at the top. Liu Yichun, founding partner of the studio, explains this choice in terms of the visitor experience, since at the top people can see an amazing view of the river and the city. The broken line of the transparent volume is an important signal, since the overall organization of the site, surrounded by dusty construction zones, is still in progress. Nevertheless, the sense of incompletion of the complex makes the place fascinating, and the vestiges of the original silos convey a sensation of authenticity that would be hard to find in other new parts of the city. 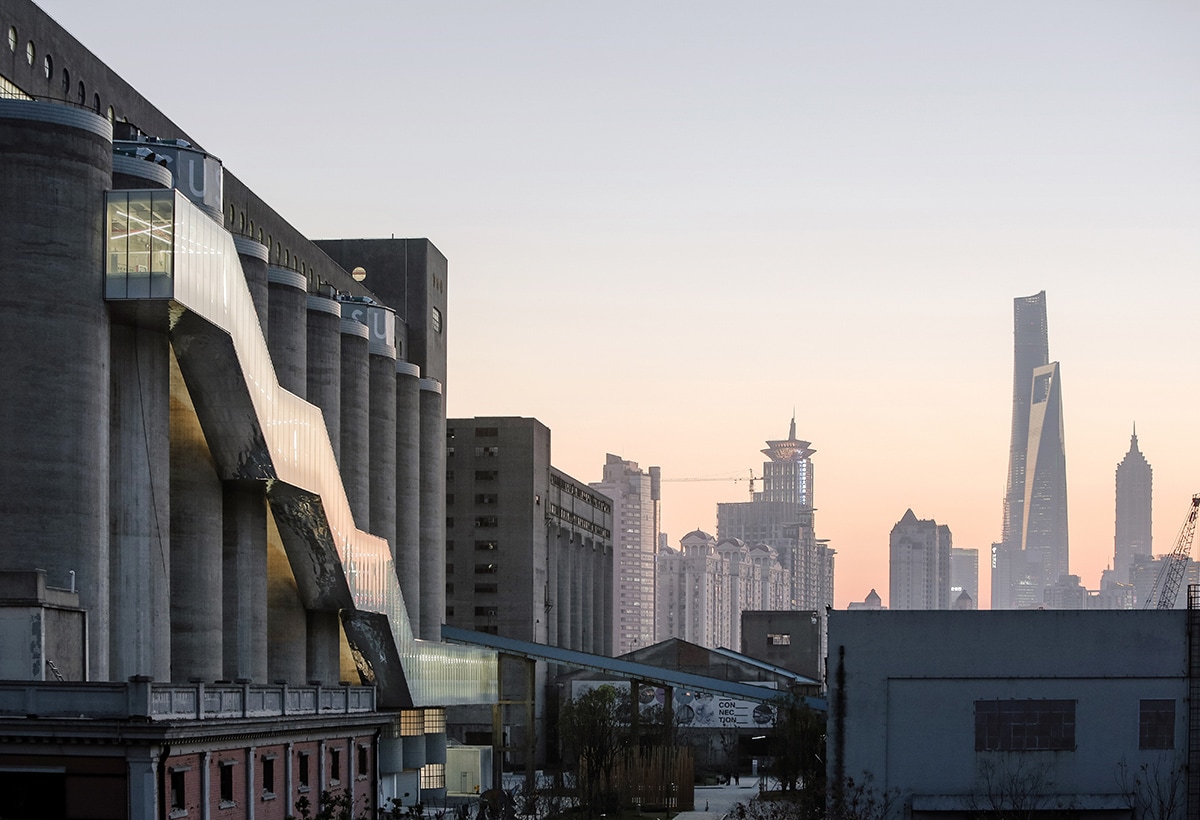 6
Silo Hall is a new exhibition space for art, created inside a gigantic industrial construction in concrete, once the largest silos in Asia. The project can be recognized from the outside thanks to the overhanging glass volume of the staircase, already a distinctive feature of the urban landscape of Shanghai. Photo courtesy of Su Shengliang.

Silo Hall is not the first project of this type. Many others have been built in the vicinity of the Huangpu River. The most famous is the Long Museum, also by Atelier Deshaus (shown in Interni 619, 2016), preceded in some aspects by the restoration of the former slaughterhouse, an intricate, impressive concrete building now known as “1933” and described in guides as a unique example of Art Deco Brutalism. These are projects that have marked a breakthrough for the architecture of the city.

Timidly at first, and now in a more systematic way, the protection of the traces of past epochs that have survived various kinds of destruction now contribute in a meaningful way to the construction (and reconstruction) of the identity of contemporary Shanghai; not only the famous works of eclectic architecture of the Bund and the foreign concessions, but also what remains of old neighborhoods, like the narrow streets of Tianzifang, a destination for alternative shopping well known to foreign visitors.

The trend is even more visible on the riverfront, where an extensive network of linear parks, public spaces and pedestrian-bicycle paths connects satellites and small galaxies of museums and art spaces, nearly all in former industrial buildings, true outposts of urban renewal. The architect Liu Yichun welcomes me to the headquarters of the firm, precisely in the vicinity of one of these exhibition centers. He begins by talking about recent projects, explaining that sensitivity to the history of places and their ruins is a conscious choice for the studio, though it can never be separated from a response to the needs of the client and the parameters of the program.

“
The roots of this interest date back to the studies for a kindergarten, one of the firm’s first important achievements."

Every aspect of recovery comes from an architectural idea that identifies a strategy of reuse of existing structures as integrated elements, functional for the construction of the new building. A modus operandi that is effective to explain to clients the advantages of the approach, while establishing a dialogue with the public authorities, which after the success of the Long Museum has become easier.

In the more recent Shanghai Modern Art Museum, for example, the 9000 square meters of exhibition space required have been created from a structure that covered only one third of that quantity. With this clear objective, the concrete skeleton of the old coal storage facility has become the framework to support the new steel beams of the roof, to which slabs with a slender exposed structure of metal struts have been attached, resembling in certain details the architecture of ships and waterfront buildings.

The exhibition spaces have then been organized in the intervals between the two systems, and the older structures often appear by surprise in the new, like fragments of an archaeological discovery made during the reconstruction. Visitors can make an unusually close approach to the coal chutes, which are now a ceiling or a detail of the walls. 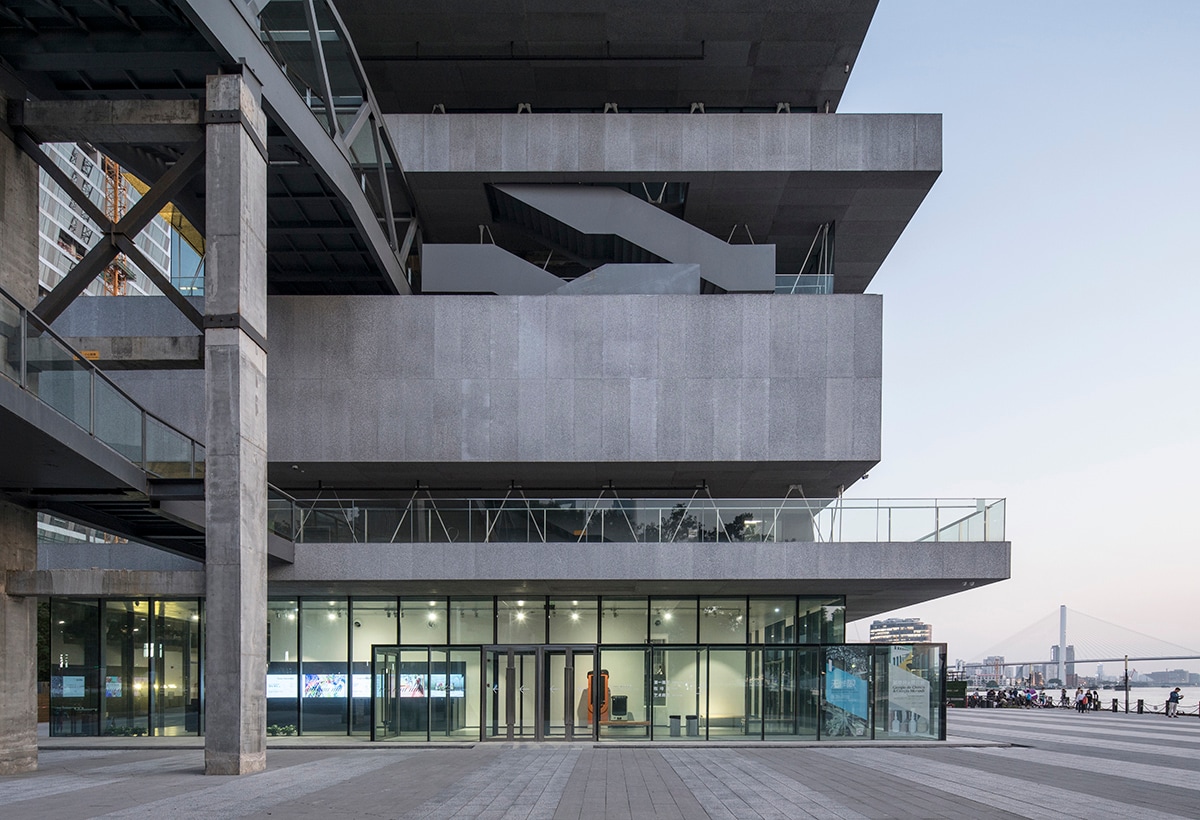 4
Like many of the firm’s projects, the Shanghai Modern Art Museum stands on the traces of an earlier industrial building. Photos courtesy of Tian Fangfang.

From the outside the existing structure is partially hidden by the forceful horizontal extension of the new floor slabs, broken up only by the staircases that can be glimpses between the parapets. The same principle has been applied in the service structures, a strip of cafes and shops that form a sequence of volumes, again suspended from an existing reinforced concrete truss. The complex faces the river, and at dusk, when the sun’s rays are reflected on the windows of the museum as it closes, the night life continues outside, in the pedestrian areas, where the boats at the docks suggest the atmosphere of a tourism resort.

The projects by Atelier Deshaus are deeply interwoven with the cultural identity they contribute to formulate, and the headquarters of the studio itself is part of the flow of urban transformations and experimentation. At present it is located in a complex of small constructions adjacent to the West Bund Artistic Center, a vast system of exhibition spaces where art and lofts are developed in clusters around the hangar of what was once an airplane factory. This is a creative village, a community of studios for architecture, fashion, photography and art, self-financed and independently constructed by the residents on land made available in a five-year lease by the municipality.

“
Sensitivity to the history of places and their ruins is a conscious choice for the studio, though it can never be separated from a response to the needs of the client and the parameters of the program. "

The buildings have been made with an eye on costs, but precisely for this reason they have greater freedom from the constraints of speculation. At the moment the lease deadline is approaching, and the entire complex could be demolished to make room for a hotel. While Arch. Yichun speaks, I can already feel a bit of regret for the irremediable loss of a place with a young, strong cultural spirit and an urban identity; the unique character of the area does not escape the many photographers – amateurs and professionals alike – who wander its streets.

At the same time, in the words and the serene gaze of Yichun one can sense the faith and desire to approach this new challenge as an opportunity for the growth of the studio, which is in need of a larger facility today. It is clear that any new project may still involve the whole community, perhaps in a new experiment.

While Zheng Yi, part of the studio’s staff, accompanies me to visit the outdoor areas, she explains that some of the pavements and walls of the district belong to the previous airport complex, now surviving in the large exhibition space of the main hangar. The relationship of proportion is like that between a large cathedral and the surrounding town. From the studio we go to a nearby fashion atelier with a connected Tea House, also designed by Atelier Deshaus. Past the entrance, a two-story space opens up with a window facing an enclosed garden, shaded by a large tree that already existed at the site. 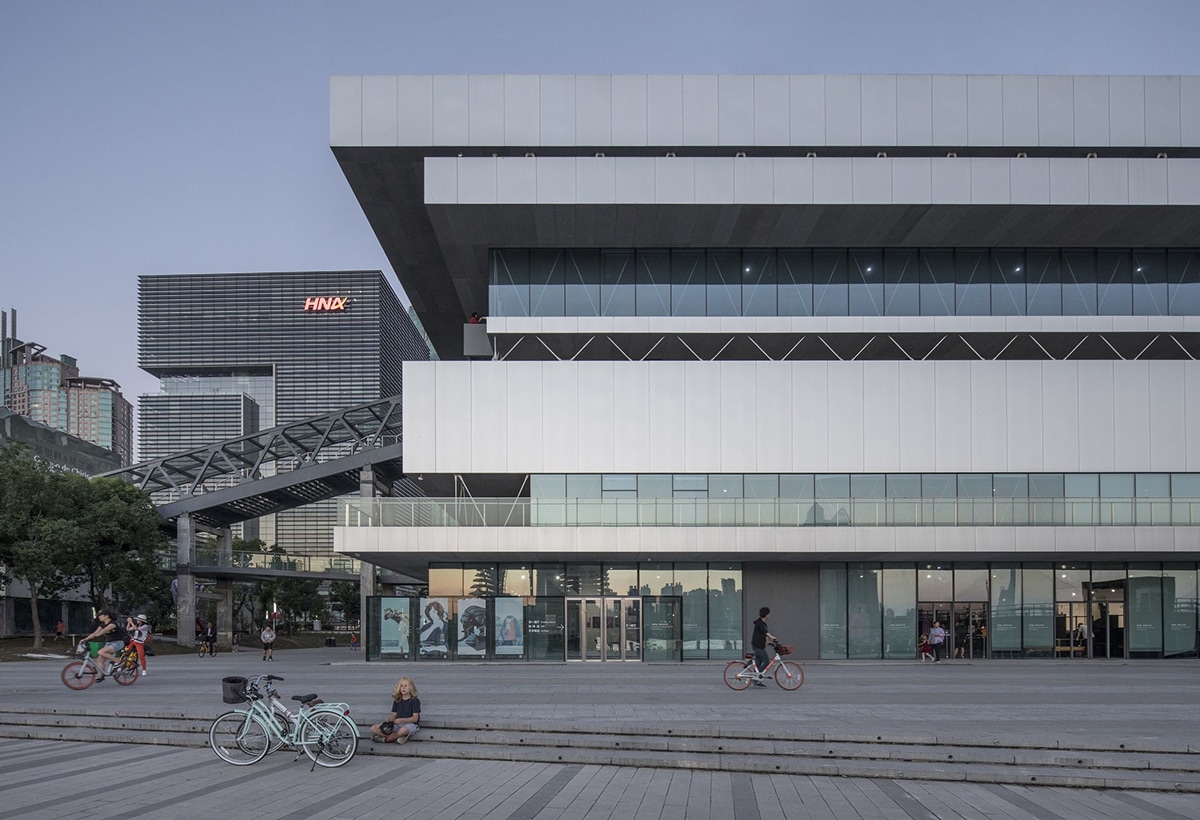 5
The Modern Art Museum (MAM) in Shanghai, China, is an institution focused on diversity, equality, nurturing creativity and education. An institution with a global and multidisciplinary approach, MAM Shanghai aims at contributing to the education, knowledge and enjoyment of art through an immersive and engaging experience. Its vast industrial architecture offers a versatile and dynamic space to connect the shared cultures of the East and West. Located along the ‘cultural corridor’ of museums and galleries that runs along the riverside in the Pudong New Area, MAM utilizes innovative methods to facilitate public participation and engagement with art.

The Tea House is a micro-architecture designed down to the smallest details, with a few fixed furnishings inserted in a composition gauged for the perception of the internal space and the garden, which seems larger from the inside. Everything is inserted in the framework of a structure in square tubing, painted black, with inserts in natural wood, transparent glass in the low part of the walls, and printed glass above to spread light while limiting the gaze.

The effect is intimate and very luminous at the same time. The sensitivity to relationships of perception and scale is a major concern of the atelier, already explored in the stepped ramp of the Long Museum, which takes the space of the majestic exhibition halls back to a more human dimension; the roots of this interest date back to the studies for a kindergarten, one of the firm’s first important achievements.

Towards the end of our visit Yichun shows me that also in the projects in progress, the person-space relationship returns in new interpretations, on the scale of landscape or in the design of domestic interiors. These works are very different from each other in terms of language and functions, displaying a rediscovery of the ancient Chinese conception of construction of space: the topic is very stimulating, and we hope we will have a chance to delve into it, and illustrate it for our readers, in our coverage of new projects that are about to be implemented.