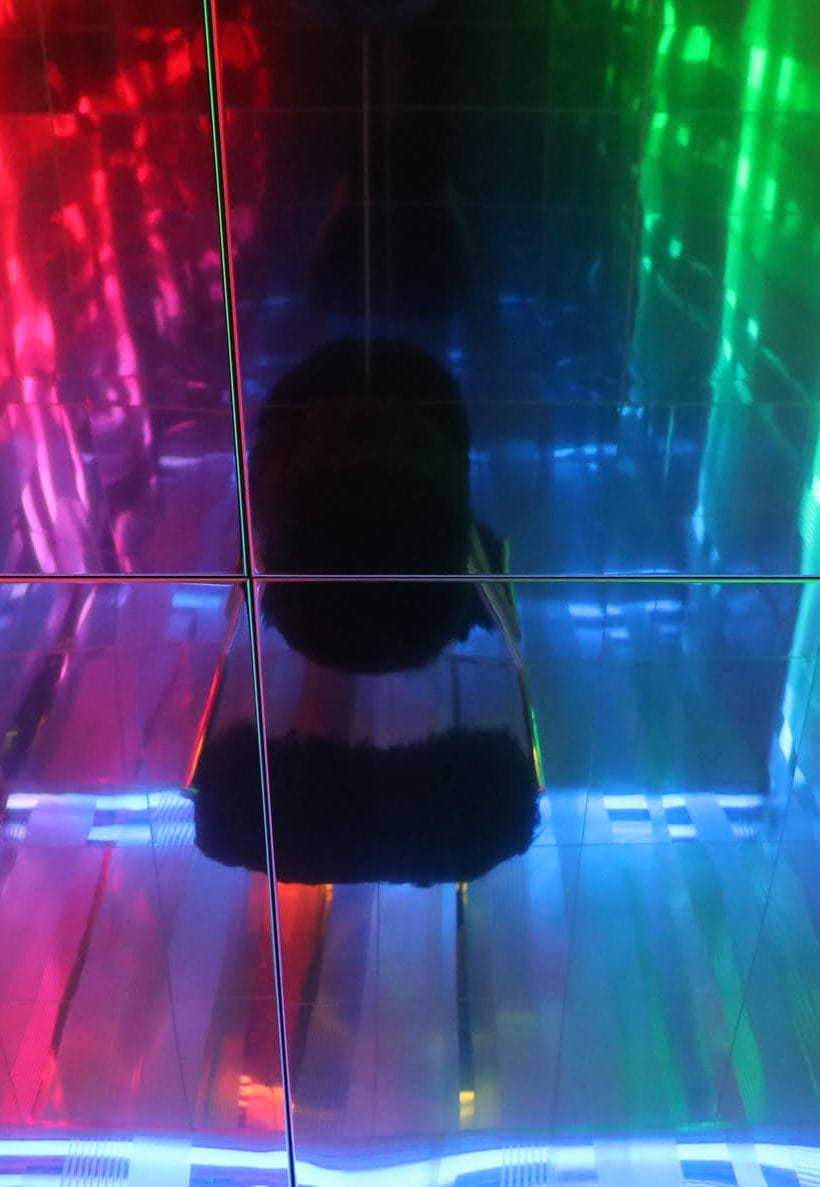 Always out in front of themes, Nanda Vigo has brought an unprecedented mentality of research into the world of architecture.
Where time, space and light combine to make living into an artistic experience

A space entirely designed for one person, immersed in a setting of glass and light that changes over time. It would be hard to imagine a more engaging experience. This is the new work by Nanda Vigo, titled Global Chronotopic Experience.

“The client wanted an immersive work,” she explains, “in which to be completely wrapped by a Chronotopos. I have designed a cube with a base of 4×4 meters, with a 360° swivel chair at the center, where you can sit as if suspended in the void, with LEDs to create a rainbow effect. It is a space for one person only, and rather dismaying.” She smiles, satisfied with this description. But she knows that it is almost impossible to narrate that experience in words and photographs.

Light, color and materials have always been the ingredients of the constructions of Nanda Vigo, an artist who crosses disciplinary boundaries. Precisely this way of going beyond conventional academic labels has helped her to often be ahead of her time, and today – as she continues a discourse that began over 50 years ago – the world finally seems to be ready to grasp her meaning.

Time and space, Chronos and Topos are the realms in which her extraordinary story, as an artist and a woman, unwinds. And it is inevitable to add a third factor, light, which revealed itself to her for the first time when she was a child, looking at the Casa del Fascio by Giuseppe Terragni in Como, where she understood the power of architectural design as a machine to construct space, light, atmosphere.

This image convinced her to study architecture, but she immediately had the desire to open up to the world: she enrolled at the Lausanne Polytechnic, because she wanted to go to America after that (a degree from the Milan Polytechnic was still not valid in the States).

And she did just that: she flew to San Francisco and then went to Taliesin to study with Frank Lloyd Wright, whose Fallingwater was a magnet for her entire generation. But she was in for a disappointment: “Wright was a thug who struck the students on their hands and made furniture that was an ugly copy of the Austrian Secession. So I escaped. Also, in the United States I had the sensation of extreme specialization that led to a focus on details, little lockers to position in space.”

Vigo wanted to design complex environments, in which to make the facings establish a dialogue with light, furnishings and works of art, where color would interact with the habits of the inhabitants. Back in Milan, she went to see Gio Ponti “because he was the only one who was not following a preset scheme, the only one who did not live his calling in separate compartments, but with freedom, shifting from one discipline to another, without preconceived notions.

In fact he was labeled as ‘eclectic,’ a definition I think is a curse, used by those who understand nothing about freedom of expression.” With the Milanese master Nanda found confirmation of her design desires and ambitions, the positive response to multidisciplinary practice: “Ponti gave me the confidence that it was the right direction, though it was not considered by almost anyone back then.”

At the same time, she met and spent time with two men who were of fundamental importance in her life: Lucio Fontana, with whom she shared an artistic path that led to the co-design of the Ambienti spaziali in the 1960s, and Piero Manzoni, who became her partner. Two giants who did not always support her as an independent artist, and from whom Vigo had to psychological break free many years after their physical passing.

Her first real work was made from 1959 to 1962 with the project of the 0 House, also known as the Casa Bianca. “At the time,” she says, “there was the vogue of Swedish furniture, which I have always detested in both aesthetic and functional terms. So I put everything in the walls, creating an interspace of frosted glass in which to put lights. Considering the fact that at the time there were no remote controls even for on-off functions, we invented connections and mechanisms. Neon lights made it possible to change the appearance of the walls and the space.”

In 1965 a real test arrived: the interior design of the so-called Casa sotto la foglia by Gio Ponti. “I didn’t know,” she recalls, “whether to build in the style of Ponti or to go my own way. In the end I did it my way, and things worked out well.” The house conforms to Ponti’s sense of space, but it literally reinvents the interior through the surfaces of tiles and synthetic furs, in a constant dialogue between cool and warm, smooth and soft, reflecting and light-absorbing elements.

Works by Fontana and Castellani were included, directly conceived for inhabitable architectural space. So we cannot help but return to Chronos: Vigo’s works have always been ahead of the radical avant-gardes of the 1960s and 1970s. It was not about setting records, but about recognizing the arrival of an unprecedented mentality of research, perhaps comparable only to the world of art.

Looking through her projects – the Blue, Yellow and Black Houses or the more recent works for clients in Verona – we realize that they seem difficult only at first glance, but soon reveal their extreme adaptability to the life of those who dwell with them. These are interiors that listen to the deeper needs of inhabitants, triggering the idea not so much of living inside a work of art, as of making life into an artistic experience. This applies for those who want to be temporarily projected into a total experience, inside a Chronotopos (as in her latest work), or those who want to feel at home in a space she has designed.

“For me, the comfort is in the lighting,” she explains. “Once you are at ease with this main factor, everything else becomes the consequence, in a very natural way. Comfort has to first of all come from your Self. When it is achieved the rest comes easily. Actually my houses are carefully studied for those who will inhabit them, in keeping with their habits, tastes, preferences, also in art, their way of moving around inside. So in the end the well designed space makes us live well, not a single object or feature, but a whole. In fact, I have people who after 20 years still thank me for the home I designed for them.”

With respect to other great architects and artists, Vigo has few preparatory drawings of her works: her way of designing has always implied immediate doing, as when she created extraordinary lamps for Arredoluce in the workshop, “where you could directly cut the material, and where the great Angelo Lelii arrived with the first LED ever seen in Italy, after a trip to Cape Canaveral to take that powerful luminous tool directly from the Apollo dashboard.” Neon, halogens, LEDs: innovative materials she has often been one of the first to touch and use. Does technology, which moves so fast today, still help her to design things? “The important part is to continue to design with the mind. And with a pencil in your hand, which is still the tool that offers the most freedom and speed.”