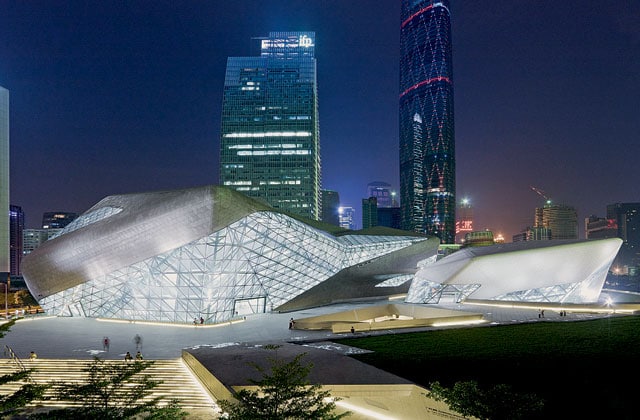 Six years after the start of construction, the Guangzhou Opera House was introduced to an international audience at the Architectural Review in February, after a few inaugural performances last summer, at the time of the Asian Games.

The London-based studio received the commission by winning a competition announced in 2002 by the city of Guangzhou (Canton), 120 km northwest of Hong Kong, the third largest city in China in terms of population, and one of the main “engines” of the prodigious growth of the country. Among the projects of Zaha Hadid, the Guangzhou Opera House is probably the one that best reflects the impact of her research on geology and natural systems. Facing the Pearl River, the two buildings of the Opera House – the theater for up to 1800 spectators and the multifunctional structure for 400 persons – are like two big pebbles, similar to the stones found in a riverbed, with forms sculpted by the erosive action of the water, which flows like the people who circulate, in a fluid way, in the space around the Opera House, accessed from various streets. A project that is totally embedded in the host context, a modern agora inside an area that is becoming the new cultural pole of the city. Simon Yu, the young associate who supervised the construction, explains: “From our viewpoint projects like this should have an inclusive function – not just as places where people can see a given performance, inside a structure that lends itself well to that function – but also as spaces of gathering, open independently of the various events on the program”. Woody Yao, the Associate Director responsible for the project, confirms that this is effectively the studio’s approach, as reflected in the design for the Cardiff Bay Opera House – which was never built, though Zaha Hadid took first prize in the competition held in 1994: “The solution we submitted at the time also called for fully used external spaces, for outdoor events, above all, but also as places for meeting and interaction”. The design of the Guangzhou Opera House represented a challenge, above all in structural terms: over 10,000 tons of steel were used to support the volumes of a project marked by great formal complexity. After entering, the multilevel foyer is like a canyon in tones of white, gray and black – colors that establish a perfect dialogue with the glass and granite of the facade, as well as the steel of the exposed structure. From the lobby one reaches the auditorium, where the champagne colored surface – all in plasterboard reinforced with fiberglass – seamlessly wraps the space, taking on the appearance of a silk drape whose color shifts in the light of small LED spots that literally form a constellation in the large hall. The visual impact is very strong: the ceiling and walls slope and ripple, creating a continuum of reliefs and valleys whose fluid forms seem to be sculpted directly by the sound waves that spread out from the stage, and by the patterns of the lateral openings that far from being purely decorative features, conceal the powerful speakers – an indispensable feature in the context of oriental opera, which emphasizes sound much more than set design, which instead is a more constant concern in European opera productions. Precious assistance has been offered, in this regard, by the consultants of Marshall Day Acoustics, a leader in the field of sound optimization, who provided expert suggestions for improvement of acoustics in this very asymmetrical space. For the audience, it becomes a spectacle within a spectacle: a visual and acoustic experience that goes well beyond the ordinary and culminates in a triumph of harmony. The smaller ‘pebble’, or the multifunctional building, completes the picture: the smaller size and flexible internal layout make it ideal for hosting different types of events, including conferences or commercial happenings. Simon Yu is clearly satisfied: “The completion of this project required great commitment: there were moments when we had almost 2000 workers on site. But it was also a lot of fun. And now we continue to get enthusiastic feedback, especially from the younger members of the audience, which is the most gratifying aspect”. Zaha Hadid, once known as an architect of things that couldn’t be built, amazes us once again with a brilliant project. One wonders what the future will bring… which reminds me of something she told me a couple of years ago: “There is no end to invention”. That’s reassuring. Thanks Zaha!