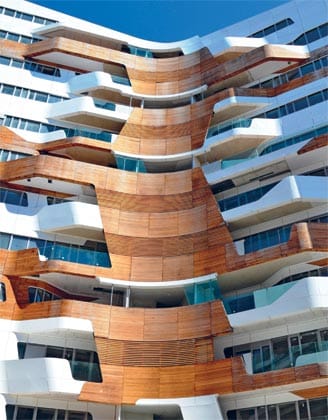 The numbers: 45,000 square meters of cladding in painted aluminium and wood, with over 2.5 million individual pieces, made in the factory and assembled in place.

These are the record quantities of a technological facade that like a tailormade garment (only 12% of the puzzle parts have a quantity of 10 pieces or more) covers the seven new buildings designed by Zaha Hadid Architects for CityLife, the project of urban renewal for the area of the former trade fair facility in Milan (in the wake of a competition held in 2004 by Fondazione Fiera Milano). The worksite for the residences by Zaha Hadid, launched in 2009, was recently completed with the consignment of 230 apartments. “The challenge was to make the different volumes establish a dialogue (ranging from the lowest one, with 5 floors, to the 14 stories of the tower), while making each one recognizable as a single, coherent unit,” says the architect Maurizio Meossi, lead architect of the studio of Zaha Hadid. “Using a parametric software for modeling,” he continues, “we have invented a catalogue of elements that can be arranged in different ways to achieve different formal results, though the ‘bricks’ are always the same – we call them DNA cells, to confirm what we might call their ‘family’ ties.” This design approach, a basic tenet of the sculptural, fluid volumes seen in the avant-garde architecture of Zaha Hadid, called for a remarkable effort in the production phase. As the engineer Davide Mangini explains, Project Manager of Permasteelisa Group, the Italian multinational recently acquired by the Japanese industrial giant Lixil, which made the facade cladding of the buildings in Milan: “Here there are no standard products, but custom parts, to comply with the specific requirements of Hadid studio. There are more than 2 million pieces, all made in Italy in our plant at Vittorio Veneto, and 60% of them have a single code, making them one of a kind. The result is a facade-puzzle, like a skin over the reinforced concrete skeleton of the buildings. A screen that is completely independent of the internal structure, functioning as a sort of technological sandwich organized with three different layers: the grid of extruded aluminium, connected to the concrete slabs, which contains the glazing and frames; the adjustable blinds, made with aluminium slats; the ventilated opaque facing composed of white painted aluminium panels, alternating with panels in Canadian cedar.” The facade thus becomes the main element of the character of the design, a strategic feature with which to experiment with new forms, new languages and avant-garde technologies. In line with the ecological profile of the whole development – CityLife, in fact, uses only renewable energy sources – the buildings adopt solutions of ecoefficiency and sustainability, giving all the residences Class A certification, and achieving the ‘zero emissions’ objective.