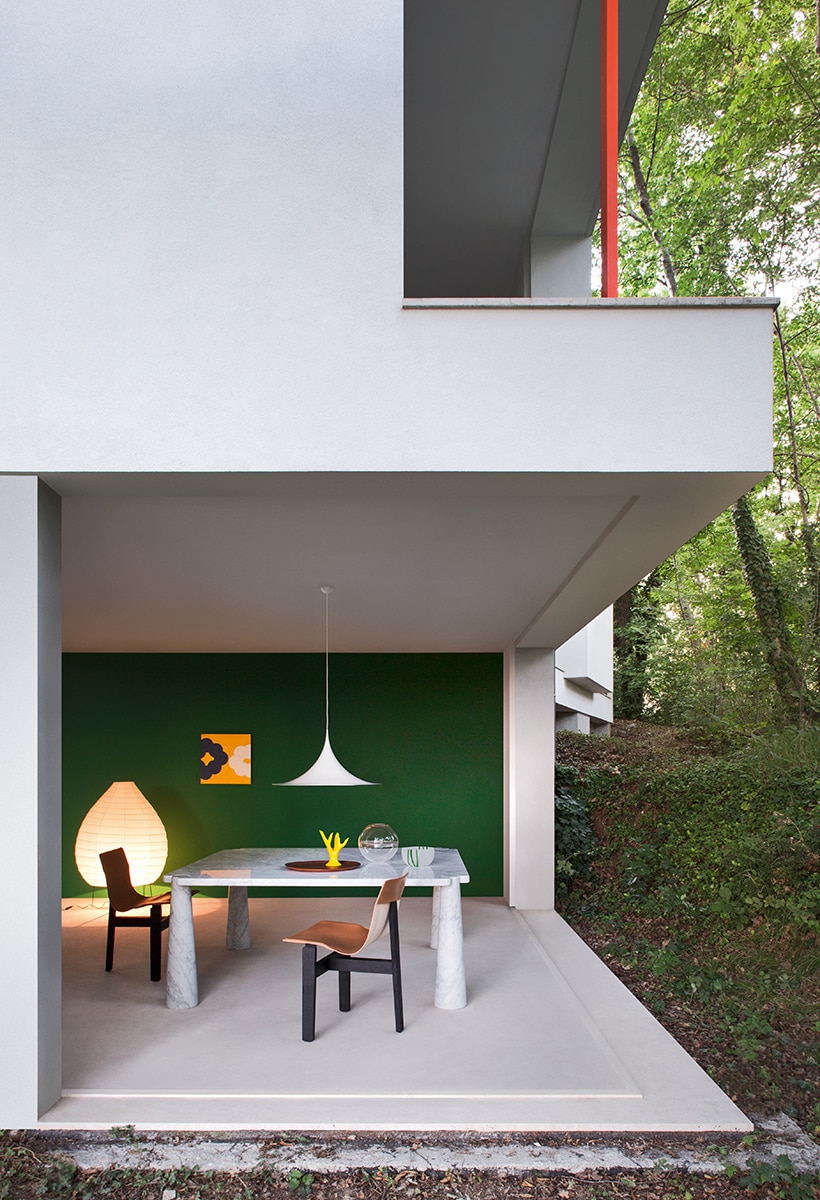 #design
Conjunctions
With The Mangiarotti Collection, Agapecasa collects the legacy of Angelo Mangiarotti and becomes the interpreter of his constructive genius. Which in the famous gravity joint of the Eros series finds its most emblematic technical-formal expression

Angelo Mangiarotti was certainly one of the greatest maestros of Italian architecture and design, although his name does not automatically appear in the group of protagonists of his generation. It is no coincidence that in his monograph François Burkhardt calls him a "lone fighter" and begins precisely by analysing the causes that led to his marginalisation by the critics. Paradoxically, these same causes have become the reasons why on the contrary, today he is reinterpreted as a central figure of our time.

First of all, his non-belonging to any stylistic consortium and open-mindedness derived from international experiences is fundamental. In fact, after first training at the Milan Polytechnic Institute and the Brera Academy, Mangiarotti chose the partisan route and took refuge in Switzerland, where he met Ernesto Nathan Rogers. The latter presented him to Max Bill, who in turn introduced him as a visiting professor at IIT in Chicago, where he became familiar with the work of Mies van der Rohe and all the members of the New Bauhaus up close between 1953 and 1955.

Chicago was the crossroads of decisive influences for Mangiarotti: obviously the organicist influence of the schools of Sullivan and Wright, but also the 'engineering' one of Wachsmann, pioneer of studies on prefabricated architectures. Organicism and prefabrication are two of the polarities within which the designer moved throughout his life. His challenge, in fact, would be to unite organic functionalism with the rational functionalism of industrial logic.

“
Chicago was the crossroads of decisive influences for Mangiarotti: obviously the organicist influence of the schools of Sullivan and Wright, but also the 'engineering' one of Wachsmann, pioneer of studies on prefabricated architectures. "

And it was in Japan that Mangiarotti discovered the missing element for obtaining the perfect synthesis of form, function, modularity and the union of parts: the joint. In architecture, as much as in Japanese carpentry, the joint has a leading role: it is not hidden, but rather made central, resolved both functionally and aesthetically. Joining is therefore an art that Mangiarotti placed at the centre of his research, which opened up to a wide spectrum: sometimes a solution found in a sculpture flows into an architecture and then from there it will migrate into a furnishing element.

The specialisation that constrained so many of his contemporaries to a single subject area and to a single spatial scale (Nervi and Morandi, for example, never designed objects or furnishings) was for Mangiarotti a heritage to be exploited in as many areas as possible. Thus the cornerstone to leverage was a system that functions to the point that it can be expressed in families, or in series that have a common matrix, or in variations of scalar size on the same theme.

This is exactly what we find today in all the designer's furnishings, which have recently been made by Agapecasa: a brand that retains an excellence in construction techniques, able to manage complex handcrafted finishes on serial pieces. The presentation of The Mangiarotti Collection dates back to 2010, consisting of 13 projects developd according to the drawings elaborated by the maestro and based on the survey and study of the originally produced models. 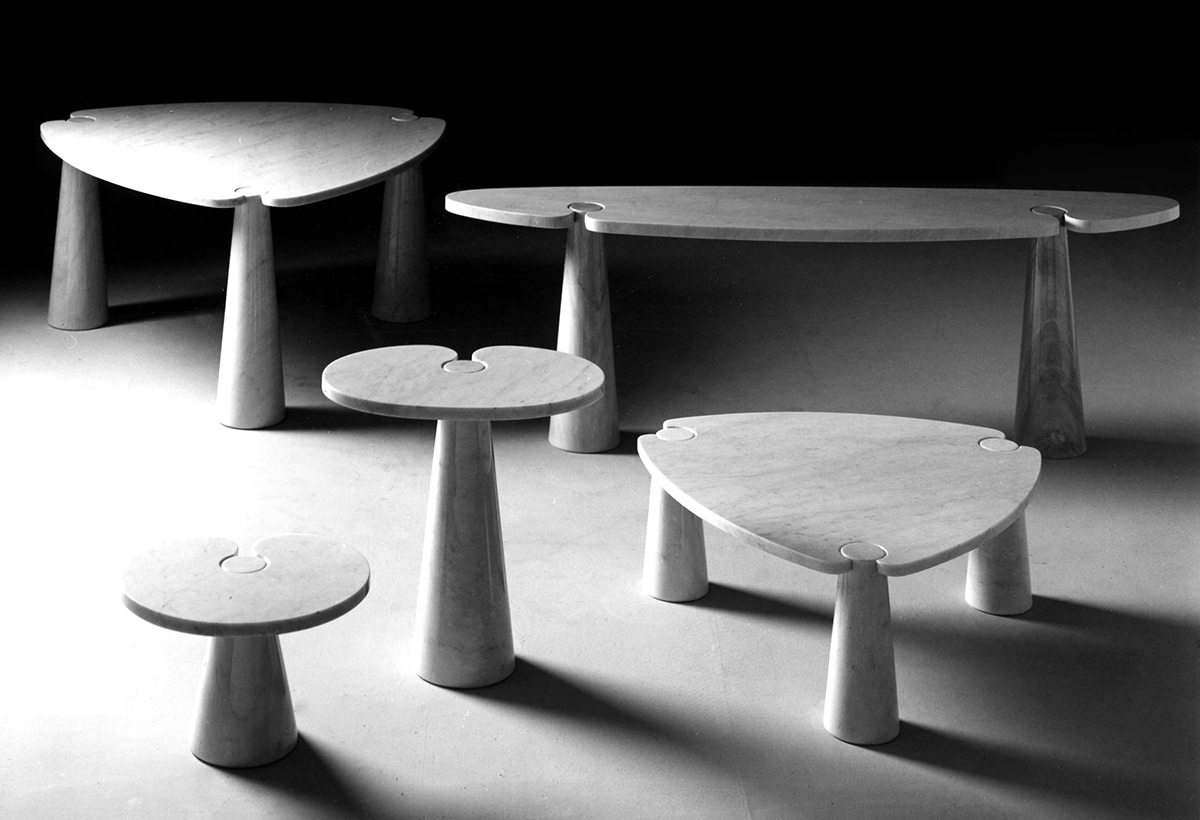 6
The Eros Collection by Angelo Mangiarotti, revised by Agapecasa starting in 2010, is based on a male-female joint that interlocks with the horizontal top thanks only to the effect of its form and the force of gravity. The system is available in multiple variants and finishes, creating a family for which the joint is the nodal point.

It would be wrong to analyse the work of this great author by reasoning according to type of use or disciplinary sectors. On the contrary, it is natural to use a cross-cutting view where the solutions found to solve a constructive question are the common thread. Clearly the first of these is the gravity joint - the identifying symbol of his research - both in the concrete structures for roofs (see the Facep system) and in the wooden furniture (Stand, Junior and Senior modular, Cub8) or in the system of glass hooks (V+V). Furthermore, the gravity joint is enriched with its namesake element: gravity.

Gravitational force, which in constructive statics is usually seen as a challenging principle to be dealt with, was leveraged by Mangiarotti for the total advantage of the structure. In this sense his masterpiece of formal-aesthetic synthesis is the Eros series and its subsequent derivations, Incas and Eccentrico. In this family of tables, with its horizontal weight the top rests on the vertical element and their meeting generates the overall cohesion and static stability, thanks only to tangency and gravity. 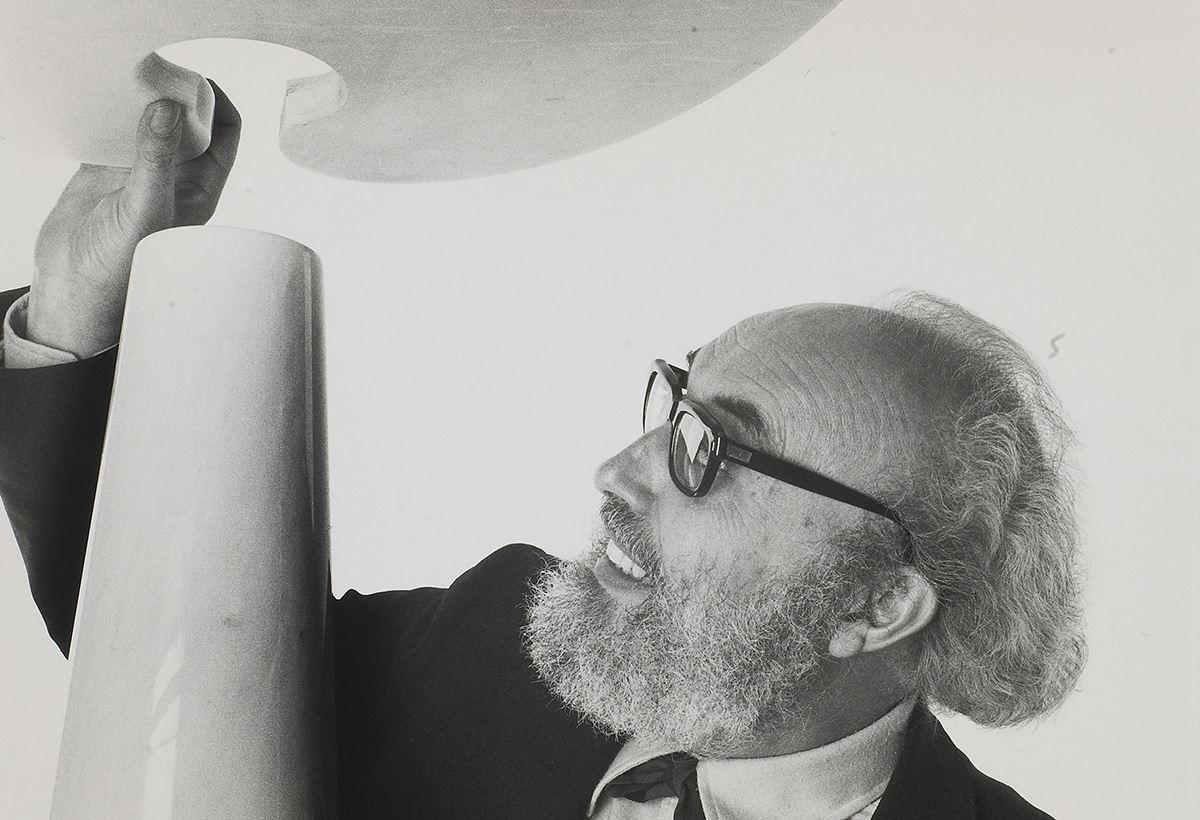 7
Angelo Mangiarotti was born in Milan on 26 February 1921. Mangiarotti combines professional activity, whose works are published in books, specialized magazines and newspapers, an intense didactic activity carried out in Italian and foreign universities. He holds numerous seminars and conferences at international level. His design activity, whose theoretical foundations were expressed in the book "In the name of architecture" (1987), highlights the intrinsic characteristics of each object, since only an objective design is able to avoid prevarications against its users to become recognizable collectively. He died in Milan on 30 June 2012.

All thanks to the perfect fit of a male-female joint (hence the name Eros), where one element completes the other. It is only made possible by a profound knowledge of the mechanical characteristics of marble and its turning. The logical consequence that derives from this is its application to bases and tops of different sizes and shapes. And as the material changes, the shape also changes, while the static principle remains the same: in the Incas tables (interlocking), in fact, the pietra serena is cut in perpendicular lines that follow the same logic, but which are more suitable for the processing of this material compared to turning in curved shapes as is usual with marble.

A fundamental aspect of Mangiarotti's work was following the natural direction of things. Following the physics of matter is one of the most precious lessons left to us by the teacher. This lesson has been fully learned by Agapecasa in the production of its masterpieces today, adapting materials and finishes in accordance with the changed market logic in the philological re-edition created by Agape in close collaboration with the Mangiarotti Foundation and engineered by Benedini Associati.

“
Gravitational force, which in constructive statics is usually seen as a challenging principle to be dealt with, was leveraged by Mangiarotti for the total advantage of the structure."

There is a great deal of engineering work behind the perfection of the product, carried out by technicians, advanced machinery and artisan hands all together. In fact, every change in material not only had to be in compliance with the original design, but had to undergo that transformation of the material that hides, behind the simplicity of that ingenious joint, the complexity of the alignment of weights and shapes that makes it functional.

This means not only doing, but also understanding and assimilating, the integral vision of the author on the connections between things. And all this brings us back to a way of thinking about the aesthetics of things, which comes from a broader ethical view of doing, where joining - materials, men, thoughts - remains something to boast with pride.