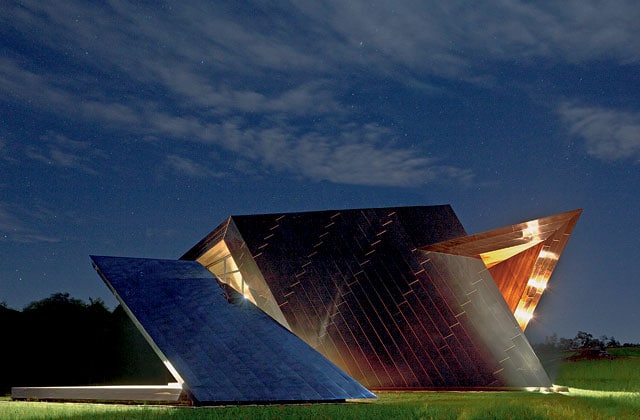 The result is a dynamic sculptural volume that stands out like a geometric rock in the landscape. The compositional research of Daniel Libeskind takes on the full range of project scales with the same excellent results: towers and skyscrapers, museums and large public structures are approached by the winner of the competition for the reconstruction of Ground Zero in New York with the same intensity he puts into smaller buildings and design works, or this surprising domestic construction set down in the landscape of Connecticut.

For Libeskind, the idea is not to stick with the modernist slogan “from the spoon to the city”, but simply to extend design research to the entire environment around us, both public and private.

Within this global approach, the design of this private home embodies the idea of getting beyond the traditional sum of components of architectural space (horizontal floors, vertical walls, roof), to reinterpret the lesson of the artistic avant-gardes of the 20th century regarding ‘total space’. In this project the conceptual shift is resolved by the general idea of thinking of an inhabited volume as an internal space obtained by means of a series of pondered twists in a ribbon of reference bent back on itself and assigned the role of forming the complex geometry of the whole. The ‘ribbon’, clad on the outside by sheets of stainless steel treated with chemicals for a burnished finish, with reflexes that change throughout the day, depending on the angle of the sunlight, develops from the lawn, first as an entrance platform, and then vertically bends in different, clashing angles to form walls and roof, as a unified, continuous surface marked, however, by a disruptive sequence of interlocks that make it into a sort of geometric crystal, similar to the craggy rocks that stand out in forests, like natural counterpoint, as part of an overall environment. The extension of the steel ribbon forms, inside, a large unified space joined, between one bend and another of the ‘architectural skin’, by the master bedroom in a corner position. The open portions of the inclined facades, surfaces made with scales of steel, like a contemporary take on shingles, correspond to open, glazed parts that fill up the voids created by the shaping of the ribbon, faced inside with wooden boards. This materic choice references the warm atmosphere of the American cottage, making the entire living space monomateric with the exception of the flooring in pale stone, lit by strips of grazing light that underline the geometric shapes of the custom furnishings. The furnishings are placed along the inclined partitions that determine the planimetric solution, and become an integral part of the architectural design; furnishings that ‘design the space’, like the large two-sided zig-zag divan that separates the living and dining areas, with an accessorized kitchen counter in the latter. To isolate the lone bedroom from the large living area, a multifunctional block is placed in a central position, containing the toilet, a large custom bathtub and a closet. Toward the dining area the wooden wall of this small piece of contained architecture is transformed into a large bookcase niche. The geometric shaping of the construction extends from the outer configuration of the house, moving through different scales, from the wrapper to the furnishings, incorporating portions of the steel ribbon that interrupt the glazings, forcefully entering the private space, like architectural shards. As a reminder of the character of the whole and to underline the not only visual relationship between the house and the landscape.