#architecture
Jean Nouvel: Desert Rose
In Doha, the faceted forms of crystals from the arid earth of the Middle East are the inspiration for the National Museum of Qatar (NMoQ) designed by Jean Nouvel, seeking a new dialogue between history and the contemporary essence of a place, a landscape, a community

“A modern caravansary” in steel and concrete. Its designer, the French architect Jean Nouvel, thus defines the National Museum of Qatar (NMoQ), opened on 28 March in Doha, along the theatrical Al Corniche. The museum is becoming a cultural magnet, attracting visitors to the capital of Qatar from around the world (the city also boasts the Qatar National Library by OMA and the Qatar National Convention Center by Japanese Pritzker Prize winner Arata Isozaki).

Charmed by an ancient and hospitable land full of age-old traditions that link back to indispensable elements of reference – the desert and the sea – but modernized in its infrastructure, the starchitect, in his second project here (the first was the Burj Doha Tower in 2013) has again come to terms with two fundamental paradigms of Arabian architecture: light and geometry, masterfully interpreted in the Louvre at Abu Dhabi in 2017.

°
Jean Nouvel was born in Fumel, France in 1945. After he enrolled at the Ecole des Beaux-Arts in Bordeaux, Jean Nouvel ranked first in the entrance examination of the Ecole Nationale Supérieure des Beaux-Arts in Paris in 1966 and obtained his degree in 1972. Assistant to the architect Claude Parent and inspired by urban planner and essayist Paul Virilio, he started his first architecture practice in 1970. Soon afterwards, he became a founding member of the Mars 1976 movement whose purpose was to oppose corporatism in architecture. He also co-founded the Labor Union of French Architects in marked opposition to the existing national Board of Architects. His strong stances and somewhat provocative opinions on contemporary architecture in the urban context together with his unfailing ability to inject a sense of originality into all the projects he undertakes have formed his international reputation. Jean Nouvel’s work does not result from considerations of style or ideology, but from a quest to create a unique concept for a singular combination of people, place and time.

He has created a landmark, commissioned by the Emir Sheikh Tamim bin Hamad bin Khalifa Al Thani, as a rigorous landscape where the sun becomes the director, adding or removing depth in constant pursuit of shadow. The architecture generates shade, which is necessary and mutable across the day, and it generates light, with the grandeur of a symbolic desert rose of 33,618 square meters. The spectacular postcard view of the museum is based precisely on the complex sedimentation of the mineral crystals resembling flowers that grow in the arid coastal desert regions.

“I liked this idea as a starting point for the project,” Nouvel explains, “because since the dawn of time the desert rose represents the first architectural structure created by nature, through the incessant operation of wind, salt water, sand. A poetic, though utopian, vision. To construct a building with a length of 350 meters, that gently rises and falls, suggesting the undulation of the landscape, we had to face enormous technical and technological challenges.” 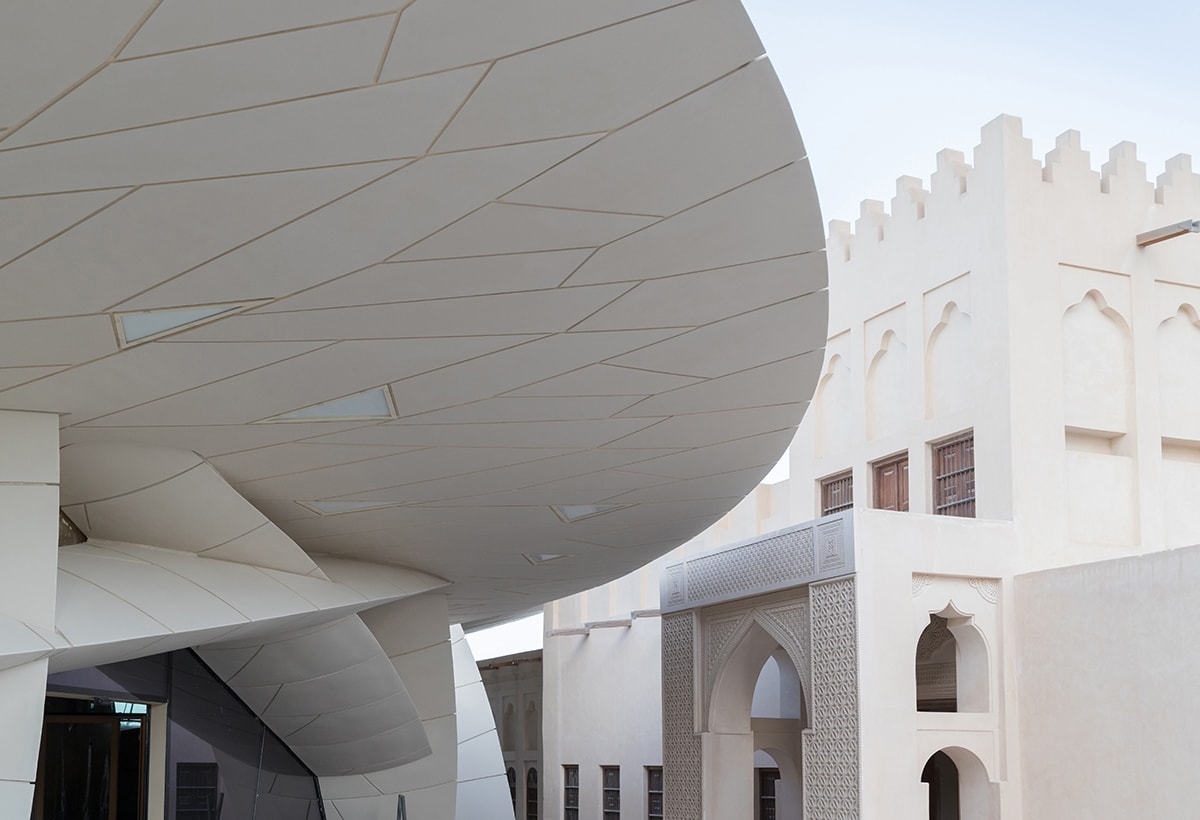 7
A thrilling close-up: the renovated historic palace of the sheik Abdullah bin Jassim Al Thani (1880-1957) and the new National Museum of Qatar designed by Ateliers Jean Nouvel, clad in a structural shell of sand-colored concrete reinforced with fiberglass, formed by disks of different diameters and curvatures.

In the ingenious architectural transposition, the sculptural ‘petals’ of the rose have become 539 disks in sand-color concrete of different diameters and curvatures, some vertical, some horizontal, intersecting to also form inclined planes and overhanging angles, perfectly capable of modulating and mitigating the effects of the sun’s rays.

An architectural, spatial and sensorial whole: the skin of the building, interrupted only by a few recessed openings, has been made in concrete reinforced with high-performance fiberglass, inside and out. In a continuum of nuances as well: neutral and monochrome finishes, floors in polished concrete, walls in Stuc Pierre, a traditional stucco that imitates stone, ceilings in microporous plaster sprayed on mineral wool, glazings with inset frames as infill for the gaps between the disks, where a thermal mass is created that reduces the need for air conditioning.

While listening to the place has given rise to an interpretation on an architectural and sustainable scale of the local landscape, which brings a sense of surprise, tension and dynamism, the exhibits of the museum aptly embrace the temporal dimension. 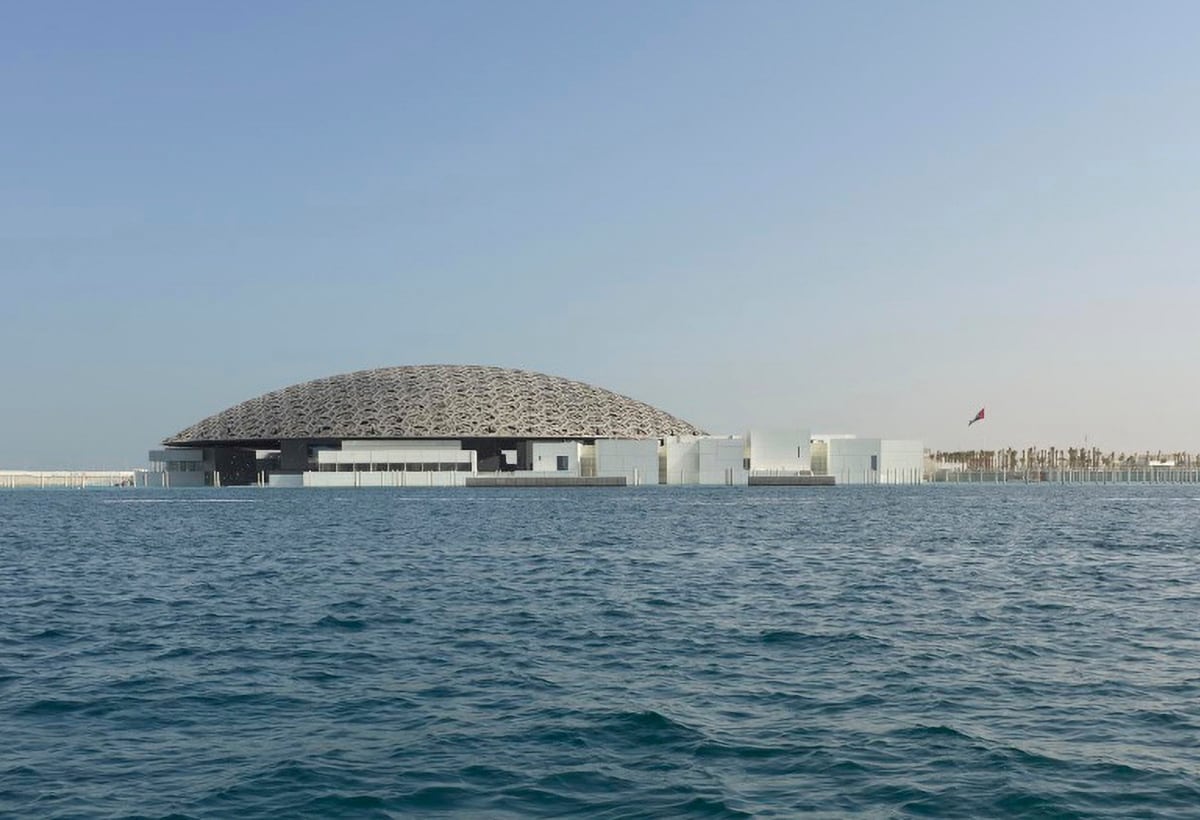 3
In this gallery, some projects by Jean Nouvel. Louvre Abu Dhabi. It is a project founded on a major symbol of Arab architecture: the dome. But here, with its evident shift from tradition, the dome is a modern proposal. A double dome 180 meters in diameter, offering horizontal, perfectly radiating geometry, a randomly perforated woven material, providing shade punctuated by bursts of sun. The dome gleams in the Abu Dhabi sunshine. At night, this protected landscape is an oasis of light under a starry dome.

The protagonist is the history of Qatar, once a land of fishermen and pearl hunters, which after World War II discovered enormous resources of oil and then natural gas: three thematic chapters cross the eleven galleries, with interactive and immersive experiences, as well as the customary works of art, documents, commissioned pieces and rare artifacts.

The environmental galleries connected in a winding itinerary of 1.5 km – with reception areas and a lobby, an auditorium, workshops, offices, catering zones and a restaurant with kitchen – surround the gem of the complex, like a garland: the historic 20th-century palace that belonged to the sheik Abdullah bin Jassim Al Thani (1880-1957), son of the founder of modern Qatar.

“
I liked this idea as a starting point for the project, because since the dawn of time the desert rose represents the first architectural structure created by nature, through the incessant operation of wind, salt water, sand. "

A totally restored building that was the dwelling of the royal family, seat of the government and then the nucleus of the original National Museum. Its iconic howsh, the internal central courtyard, functions as a space of connection amongst the parts, also hosting major outdoor events.

Its visual counterpart is the enveloping landscape of the gardens forming a public park of 112,000 square meters: a setting where concrete dunes and parking areas alternate with cultivated segments around an artificial lagoon, as well as native vegetation.