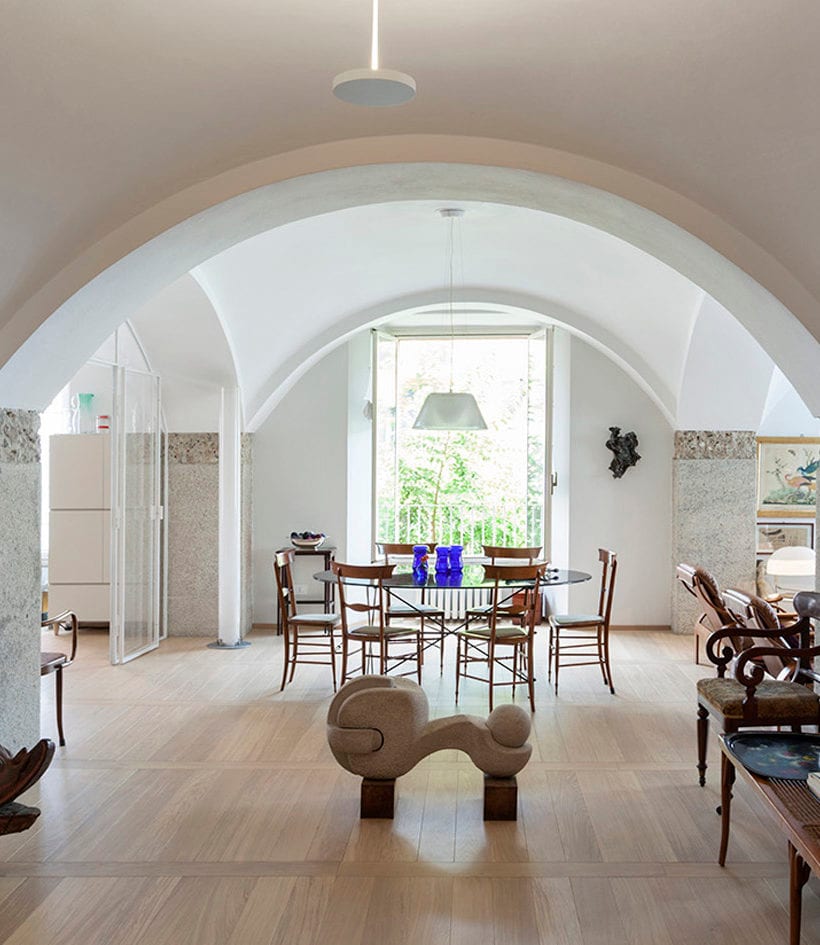 Design amidst the vaults

#Milano
Design amidst the vaults

In Milan, in the historic Ticinese district, a former grain silo unexpectedly becomes a contemporary apartment. In the spaces formed by sculptural vaults, history welcomes the contemporary without compromising the variety and charm of the original industrial architecture

If it is true, as the great architectural historian Bruno Zevi said, that in their work architects constantly try to capture space, in this project Filippo Taidelli has had to engage in a difficult battle.

Born in 1972, an up-and-coming name on the Italian scene but already known abroad as well, with works of international impact (such as the Humanitas University Campus recently opened at Rozzano, Milan), Filippo Taidelli likes to approach different scales of design, carefully controlling every phase with clarity of language and, above all, an original way of interpreted themes and programs.

Starting with this one: the recycling of a former grain silo from the 1800s, converted to create a contemporary apartment. “We are close to the Darsena, namely the docks area in the canal zone, in the heart of one of Milan’s historic districts,” Taidelli says. “There are massive granite columns, made to stand up to exceptional loads. As a storage facility, the place had no windows.”

These limitations have become an opportunity to find unusual solutions. “It wasn’t easy to insert a ‘bourgeois’ apartment here, with its books, paintings, furniture… in short, all the objects that narrate the history and passions of a family.

We had to work inside an unexpected space,” Taidelli continues, “far from normal typologies, but undoubtedly fascinating. The key to the project was to refurbish the silo without destroying its spirit. So the columns have been conserved with all their sculptural presence, becoming the strong point of the design: they pace the layout, which avoids rigid divisions, keeping the original open atmosphere of the space.”

Nevertheless there is still plenty of privacy. “In the bedroom zone and the service spaces I worked on the volumes, conceived as boxes that fit into the interior of the silo, inserted in the existing spans with their clear geometric order.”

But what about light? “The scant natural lighting is boosted by diffused, warm, enveloping artificial light, scanning the vaults, underscoring the presence and the original function of the spaces,” Taidelli concludes.

The daytime area conserves the atmosphere of the 19th-century storage facility, with its massive columns with capitals in Lombard ceppo stone. The furnishings mix works of art with family heirlooms and icons of design history.
A corridor connects the living area (background) to the bedroom zone, subdivided into a series of box/rooms clad in velvety textured concrete. On the floor, parquet installed in a ‘running rail’ pattern.
The isometric views.
The kitchen is framed by openings in glass and iron, with an industrial look: the arch is the leitmotif of the whole house, taking on different functions and aesthetic solutions to meet various needs. Here it contains the volume of the furnishings.
The box of the master bedroom.
#Design #Projects #Milano