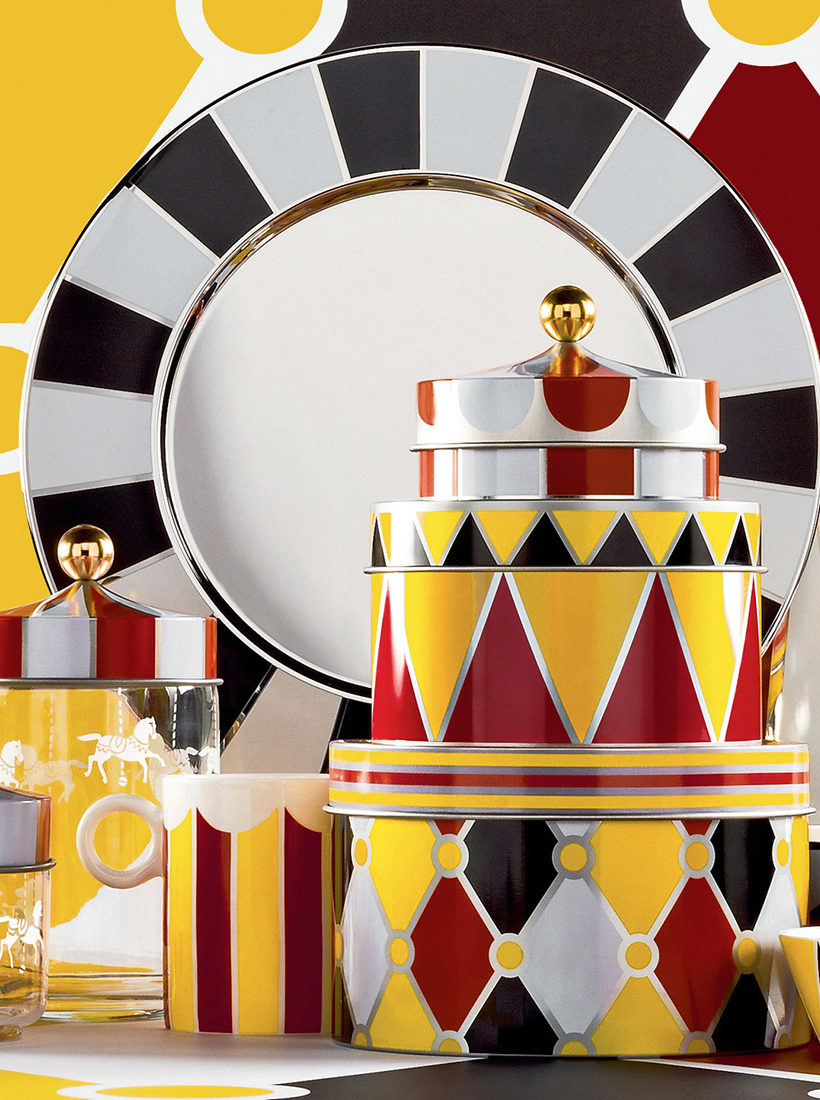 There’s Marcello The Strongman who cracks nuts with his muscular limbs. And Gilberto The Jester who leaps and also opens wine bottles. Then we have Valentina The Ballerina, an elephant light on her feet who dances to the tune of a music box, and Alberto The Candyman, a top-hatted clown who smilingly passes out candies. Last but not least, Massimo The Ringleader chases a banana, transported by a monkey.

Five characters, five objects with mechanical movements, complex forms and bright colors, that seem to evoke the tradition of 18th-century automata in order to project it into a new design-minded dimension, where every personality corresponds to a precise domestic function. These are the protagonists of the new story written by Marcel Wanders and published by Alessi.

A tale about the circus, involving 29 other object-actors; as a whole, they open up a new chapter in the artistic and productive history of the company from Omegna. Whose president, Alberto Alessi, talks it over with Interni.

With Alessi Circus, Alessi emphasizes its role as a research lab in the field of the applied arts. What do you think about this viewpoint?
The collection comes from a very long process, which lasted five years, developed around the idea of combining the logic and techniques of industrial production with those of handicrafts. The latter component is expressed above all in the five limited-edition pieces offered under the Officina Alessi trademark, items that are extremely complex to make.
They are joined by many other objects with a more precisely industrial conception – plate stands, cups, trays, ice buckets, bottle racks, coolers, salad bowls, mugs, vessels – that complete the range of product types already designed for us by Wanders. Their characteristic is that they introduce a livelier, more accentuated decorative component, decidedly innovative when it is applied to metal. We should remember that it is difficult to color steel.
In Alessi Circus the color is based on the decal technique, applied by hand to a specially treated metal surface and then fired a very high temperatures, to stick to the steel permanently. This production mode was used by Alessi for a short period at the start of the 1980s, but for various reasons it was then abandoned. We thought it was a good idea to revive it to develop the new collection by Wanders, in which color plays a truly fundamental role.

In the presentation for the collection you talk about refined workmanship that can indicate paths still open for European manufacturers. What do you mean?
Producing simple objects in Italy and Europe today is practically madness. Globalization means that the same pot produced in Omegna today costs four times more than one made in Asia. So to survive, companies like Alessi that work with steel or glass or porcelain have to focus on a product based on special know-how, that at least for the moment cannot be copied in the Far East.
I’m talking about an immediately perceptible added value, not just in aesthetic terms, but also in terms of construction. The five pieces in the limited edition of the Circus collection are made with a mixture of techniques that range from traditional molding to lost wax casting – used for solid steel parts with complex forms – from 3D laser cutting to turning. About ten techniques, which Alessi uses all together for the first time to produce objects of very high crafted complexity.

Alessi Circus is a collection that openly wagers on the image value of objects. Does this mean that Alessi continues to believe in its vocation as a ‘dream factory,’ as you called the company at the end of the 1990s?
We know that any object, even a humble household utensil like those produced by Alessi, can have an impact on the emotional sphere, on affection. Good design always establishes emotional ties with the user, though this often happens unconsciously, or through so-called anonymous design. Some designers have fully understood this and put it to good use.

Do you think the way people dream about objects has changed over the years?
Of course, though I couldn’t explain exactly how. From the mid-1980s to the early 1990s few objects were able to create a sense of surprise, and to get closely in touch with their users. This is why the products designed by Alessi by talents like Alessandro Mendini, Aldo Rossi, Michael Graves and Philippe Starck had such immediate, strong impact. Looking at shop windows, it was hard in those days to find great vitality.
Now the situation is much more heterogeneous, complex, composite. Other product worlds have emerged, like that of telecommunications and consumer electronics, which have great appeal that has gone beyond the popularity of objects for the home.
This makes the new challenges much more difficult, but also more stimulating for Alessi. We rely on a network of 300 active creative people who help us to explore the desires of people and to develop new ideas. My goal is to constantly update this network. It is no coincidence that Alessi is known as the company most open to collaboration with young and even very young designers. Every year we launch at least three or four, with objects we always include in our catalogue. I think their collaboration is fundamental to glimpse and understand the spirit of the times.

Does this mean that the model of Italian design based on a close intellectual and professional relationship between designers and entrepreneurs is still alive and well?
Definitely. And it will get more and more valid. We entrepreneurs are fundamentally mediators of a hybrid nature, halfway between art and commerce, a connection between creators and the market, imagination and audience. This is a role and a mission one can carry out only directly, personally. From this standpoint, Italian design entrepreneurs are the best counterparts for any designer from any part of the world, the only ones capable of giving objects a quality that would undoubtedly be inferior in other countries.

What does Marcel Wanders represent for the company today?
We have always worked with a great many designers. But if I look back on the history of Alessi, over the decades, I realize that each decade is represented by just a few designers. The 1970s are represented by Sottass, Sapper and Castiglioni; the 1980s by Graves, Rossi and Starck; the 1990s by Giovannoni, Arad and so on. The case of Alessandro Mendini is different, a more finely tuned relationship, but what that shows no signs of yielding.
Wanders is clearly the designer who will leave his mark on this decade. He will undoubtedly represent an important segment of this composite mosaic in a constant state of becoming that is Alessi. Marcel brings a breath of fresh ‘Dutchness’ that corresponds to very nonchalant work on decoration, conducted with a borderline spirit that is close to art. It is a form of expression not found widely in the company’s catalogue, and this is exactly why it interests me. I think we can still do many other projects together.

To an increasing extent, the design industry is turning to the market of collectors, creating products with them in mind. Is this a sociological phenomenon or a market necessity?
Both. I should start by saying that I am not a big fan of limited editions, but I must admit that they are part of contemporary practice in design factories like Alessi, which rely on their designers to make products for the high end of the market, both because they use languages that are not as easy as those of more commercial things, and because they have higher prices. I accepted the proposal of Marcel Wanders to make this collection because I appreciate his language and I think his vision can find a space for concrete feasibility. This type of project allows the company to conduct research and to consolidate its ties with designers.

What are the directions of research presently in progress at Alessi, alongside the strictly artistic and expressive fronts?
We are moving in different areas. One is that of the Internet of Things, another is 3D printing, which opens up an alternative path of production that is very concrete, in which we strongly believe. Today the state of the research still does not allow us to achieve quality that is suited to our products, but prototyping technology is evolving very quickly. For us, it is interesting above all in relation to the casting of metals. Already next year, it is possible that Alessi will present the results of its research in this field, with a type of object never produced by us before.

Many successful Alessi objects play with a process of anthropomorphic or zoomorphic design. Are these the products that work best today?
Our production has always stood out for its use of figures of speech, like the metaphor, already deployed by Pre-Columbian civilizations to personalize domestic utensils. In those days the female figure, for example, gave the form to cups. So it should come as no surprise that this form is evoked in the lines of our corkscrews. It is an immanent process of our cultural history, also found in the work of designers you wouldn’t expect, like Richard Sapper: his espresso maker, in our catalogue since 1979, suggests a missile on a launching pad.

Do you always enjoy being a fabricator of dreams?
I always enjoy it, yes, though it is getting harder to propose new and stimulating ideas for a market that is running the risk of flattening out. Though I must say we’ve managed pretty well so far…