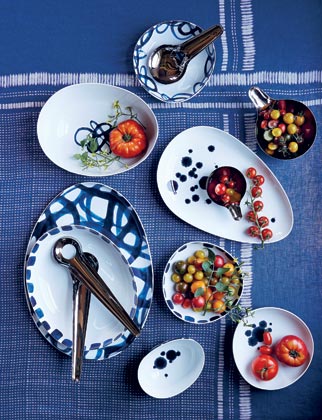 I met Paola Navone for the first time around 1980 in Venice.

I visited the exhibition Oggetto Banale at the Architecture Biennale. In that period she was working with Alessandro Mendini, founder of Studio Alchimia, the Italian avant-garde design group. I remember that I adored everything I saw – especially the shrewd transformation of everyday household objects into amusing, intriguing and at times disorienting design proposals. I did not imagine, however, what a profound influence those previously overlooked everyday objects would have, or how Navone would go about translating that original approach into a global project. Even then, though, I remember thinking that there was nothing banal or common about all the works in which she had taken part. Anything but. Over thirty years later, Navone – architect, designer, trendsetter – continues to be original, inventing and reinventing things. She has lived in Asia and traveled all over the world, observing, buying, letting herself be inspired by all the objects that make our everyday life a little more cheerful, instructive and elegant. She has designed chairs and beds, tables and sofas, porcelain and glassware, transforming objects that might be called ordinary into products of strong affection, immediately creating an emotional tie, a relationship, between the object and the person who uses it. There is nothing pretentious about any of her projects. Nothing that requires arduous comprehension. But they are all objects with which you could fall in love. And we always do just that, willingly, totally. The same concept applies to her latest work – a collection, or a series of intersecting collections, of over 150 pieces – an ambitious, impressive catalogue of furnishings and objects designed for Crate & Barrel, the American chain of lifestyle stores. “This has been a marvelous collaboration,” says Marta Calle, president of the company, who as soon as she took the helm there set off in pursuit of Paola, arriving at Studio Navone in Milan with her colleagues during the Salone del Mobile in April. “I told her I was a fan, and that it would be an honor to be able to work together,” Calle recalls. The meeting lasted hours, and when evening came Navone suggested continuing the conversation over dinner at a nearby restaurant. Paola was already thinking about the direction to take for this new client. She soon realized that she would need a theme, a strong idea on which to concentrate. She had a sudden insight when the group was seated around a table, in what she describes as a “restaurant that is the opposite of elegance, and is in fact quite ugly, but serves up excellent food.” The basic idea was simultaneously simple and generous. “To put everything together – absolutely everything – that might be useful for a dinner with friends,” she said. “This is the idea.” Or at least a good start. The result is a trio of collections, with over 150 pieces, with evocative Mediterranean names – Como, Mallorca and Riviera – containing anything that might be useful for entertaining in a simple, elegant, colorful way – tables, chairs, flatware, bowls, serving dishes, trays, candlesticks, glasses, tablecloths, carpets, napkins, napkin holders. As well as that absolutely Anglo-Saxon object that is fundamental for every table: the placemat. “I seem to achieve the best results when I think of objects inside a collection,” the designer explained. “Putting different things together unleashes a particular energy, because these objects exists, together with each other.” On 9 September 2013 ten Crate & Barrel stores presented the collections of Paola Navone, immediately followed by other shops. “Paola is influenced by many cultures, which find a place without effort, without contrivance, in her projects, her homes, her personal style,” Calle adds. Looking at the myriad of objects and furnishings she has designed, we see unmistakable touches everywhere – the original red handle on the five-piece flatware set, the cheerfully mismatched cups, bowls and plates, where marks and touches of cobalt blue enliven any table. The bowls woven like wicker baskets with a wink at tradition, the tables on trestles for indoor and outdoor use, sophisticated and also practical at the same time. The irresistible wicker chairs, woven with a gray and white pied de poule pattern; the tall chairs and padded Windsor bench, reminders of iconic American imagery – from the New England farm to the NY diner – but in different colors, sizes and sensations. All made in India, Portugal and also the United States, at affordable prices, in line with the stores, catalogue and DNA of Crate & Barrel. Now all I need is another house in which to put all these marvelously seductive objects. Not such a bad idea.