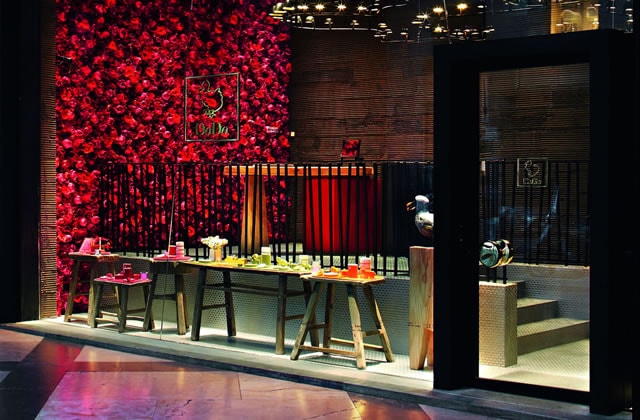 The ‘houses’ of Dodo, the charming exotic bird, in Milan and London, interpreted by Paola Navone with a cartoon approach, young and ironic, that puts the potential and the narrative content of the brand of the Pomellato group into focus.

Some projects, more than others, allow their makers to express themselves freely, without too many compromises or constraints, generating results of fun and pleasure.

In this case the maker is Paola Navone, the internationally renowned architect and designer, always a traveler in the territories of creativity and unconventional lifestyles. The challenge was a difficult one. The Dodo, a native of the island of Mauritius, doesn’t want to be alone, and always looks for new friends: the hen, the rabbit, the snake, the panda, the lamp, the turtle, the butterfly, the dolphin, the hawk, the swallow, the whale, the penguin… a jolly band. Above all, the Dodo has clear ideas about the spirit of his home, ‘as he writes to his beloved Doda’: “Finally just the two of us, my cuddles and yours, and the project is now to live together. Bathroom, kitchen, two chairs, one bed. We’ll make do with what we have, somehow. The house of Dodo brings good luck”. There is just one ‘little’ hitch: Dodo has not managed to avoid extinction, due to the foibles of humans. “Extinct but lucky, he has found a home everywhere”, Paola Navone narrates. Moved by the tale of the poor exotic bird, a rather demanding but also congenial client, she must have whispered: “Make a wish… and it will be granted”. So his fairy godmother, Turinese by birth but Milanese by choice, “like a good eclectic dreamer with an infinite curiosity for all things”, as she calls herself, has invented many houses scattered around the world, small and large. The two latest creations are in Milan, on Corso Matteotti, and in London on Sloane Square, two monobrand stores opened almost simultaneously last year. “My professional adventure and infantile regression with the brand of the Pomellato group is conceived as a young, ironic line of jewelry, which in 2010 celebrated its 15 anniversary; the collaboration with WWF Italia, to defend nature, began in 2008, with the Florence store”, she recalls. But how do you design the home of a Dodo who meets a Doda and it is immediately 100% Amore (sealed by a collection of rings with a red ecological ruby heart)? “I have done it again, this time, by recreating, with a series of recurring elements – nature, color, water – the connection with the chosen habitat and the choral compositional framework of reference”, Navone explains. If these three key words remain the signs of a ‘rebirth’ for Dodo, getting away from the opposition between local and global to rediscover the dimension of a universal uniqueness (Unique & Universal, in the vision of the sociologist Francesco Morace of the market paradigms for the next twenty years), for Paola Navone they confirm the value of an interpretation: places of sale need a close relationship with the brand they represent, in communicative terms, to give products greater opportunities for success. Even when they are little animals in the form of pendants, to purchase as gifts or to collect. “They are almost precursors of the SMS: each design of these little jewelry items has a story, a meaning, a message to send: I like you, you’re a pain, don’t get lost, etc”. So in Milan, in a large three-storey space, there are explicit references to nature: enormous blades of grass hung from the ceiling, “an upside-down green meadow made of filaments of translucent silicon, a flameproof material made mutable by the play of light and shadow”; then red and fuchsia flowers on the wall, walls finished like wet sand, shaped by the wind. Color is represented by the large neon ‘red heart’ – the logo of the 100% Amore line – on the romantic dotted wall of the lower level, and the red hassocks that in a skillful game of mix-and-match join other chromatic-materic-figurative forms of punctuation: from the sculpture-chandelier of a young Dutch talent to the large table with the form of a pod, in recycled wood. In London the perceptions of the setting are the same: the fairytale landscape is again on three levels (with a basement conceived as an event space), but here the design exercise of combinations is perhaps more extreme, the organic and alternative materials are deployed with greater intensity: the floor of the entrance level has become a ceramic surface similar to an aluminium casting alternating with paths of river stones. The colors are stronger too: the favorite blue, a direct reminder of the sea, water and the sky, is organized in a precious Klein blue Venetian mosaic on the contrasting walls that frame the windows. Red, the other guideline color along with green, is accentuates, blazing on the metal display fixtures, and then on the benches and hassocks in eco-leather. At the center of the main space, a hefty counter of rugged wood flanked by black metal stools captures the gaze, drawn on the upper level toward the mirrored mosaic ceiling. But the biggest surprise is on the facade of the building, where a large structure protected by crystals and clad in bright blades of grass, again in green silicon, seems to be eternally watered by a spring, cascading to the ground to vanish in the cracks of the pavement.