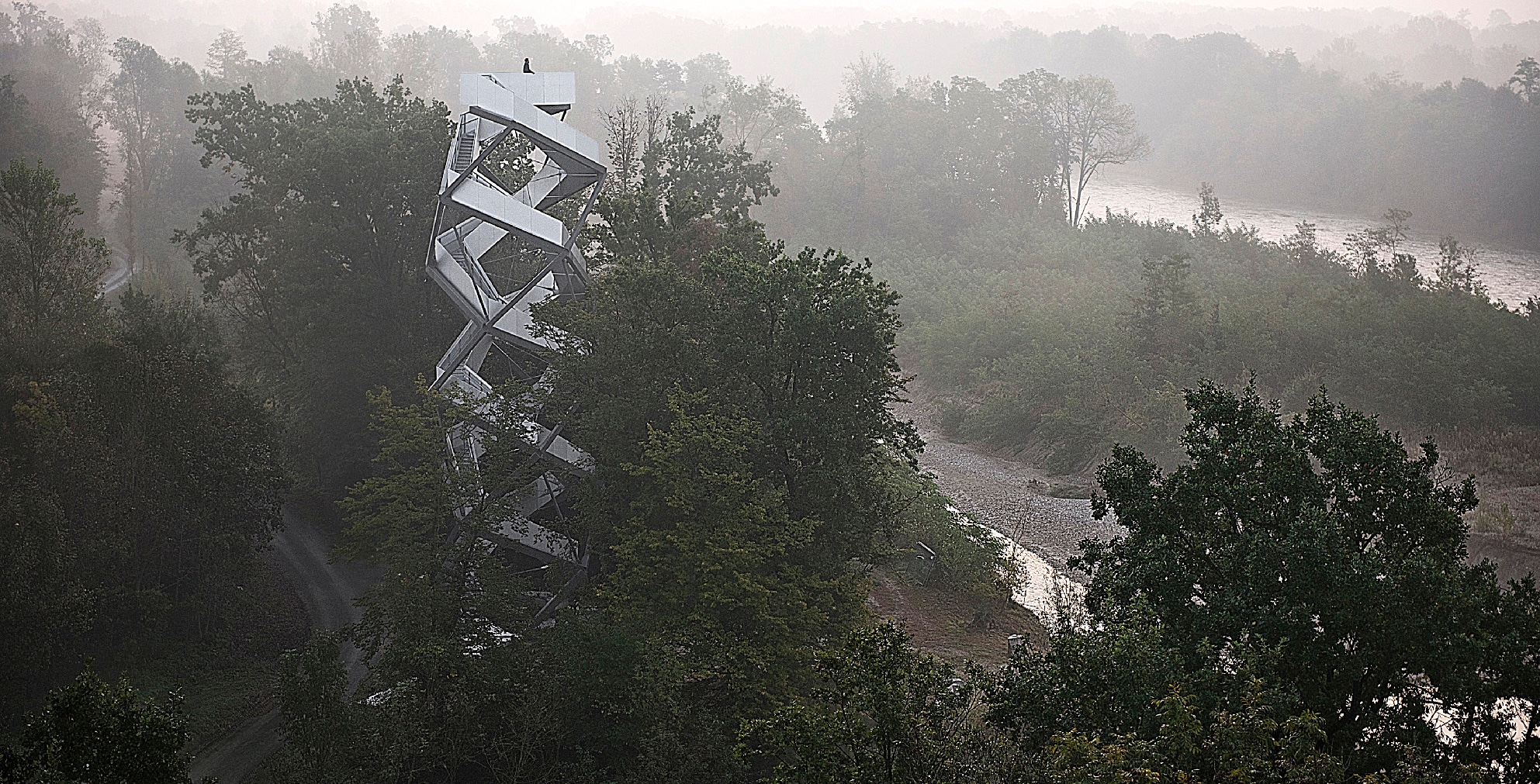 From up there at a height of 27 meters the gaze gets lost in the infinite expanse of trees, and the river looks like a silver thread winding through the forest. The lookout tower, a double helix in steel and aluminium on the border between Austria and Slovenia, in southern Styria, is not just a belvedere from which to admire the natural beauty of this area.

Along the 168 steps leading to the top, along two different ramps that rise and descend, twisting like spiral staircases, visitors can have an experience of total proximity to the forest and grasp its most hidden secrets.

The circular path starts in the underbrush, and crosses the different levels of the forest ecosystem, leading beyond the treetops (you can almost touch their branches) and then descending in a round trip that offers many fresh perspectives on nature.

Strongly urged by the Styrian Nature and Biodiversity Conservation Union, the Mur Tower — named for the river that flows through the large Austrian nature reserve of Gosdorf — was designed by Terrain: architecture and landscape architecture, headed by Klaus K. Loenhart.

A teacher and architect, and an emerging figure on the international scene, the Austrian designer already brought a sense of surprise to Milano Expo 2015, creating an absolutely unusual pavilion for his country: a forest capable of producing pure air and electrical energy.

In this exclusive interview for Interni, Loenhart explains why architecture and landscape are inseparable, as his website indicates.

WHEN AND HOW DID YOU REACH THIS CONCLUSION?

While studying in the United States, in Cambridge (at the Harvard Graduate School of Design, ed.), I began to investigate the relationship between architecture and environment, also in terms of different historical, geographical and above all cultural contexts.

In the oriental world the concept of landscape is immediately linked to that of architecture, and always has been. The same is not true here in the West: our culture sees the landscape as an object, a passive element, incapable of having a strong, independent role.

I wanted to create what I call the ‘performance quality,’ i.e. the quality that also makes the landscape active, performative, to trigger a dialectical and symbiotic relationship with construction.

LANDSCAPE AND ARCHITECTURE ARE ON THE SAME PLANE, THEN: IN YOUR VIEW, IS THIS THE INDISPENSABLE CONDITION TO PROMOTE A RESPONSIBLE, VIRTUOUS ATTITUDE REGARDING THE ENVIRONMENT?

The energy and environmental crisis undoubtedly plays a decisive role. But while in even the recent past we have limited ourselves to defining the problem on the basis of numbers, studies and research, today we can sense its dramatic impact: we have finally reached the awareness that every single action of ours (and everything we build) has direct repercussions on the environment.

This shift of thinking – from simple data analysis to real engagement – can certainly modify the perception of the landscape, encouraging an active and concrete role for it, also in the design phase. With my studio, we are moving in this direction, to transform environmental urgency into projects that explore and reveal the performances of nature.

This is what we did in the project for the Austrian pavilion at the recent Expo in Milan: a forest with a foliage surface of 43,000 square meters became a sort of ‘air factory’ that would clean the air, producing oxygen and absorbing CO2. A model that can be repeated inside large cities, capable of exploiting the ‘intelligent’ performance of nature to create an eco-sustainable climate control system.

CITY OR COUNTRY: HOW DOES YOU WAY OF DESIGNING CHANGE IN RELATION TO THE CONTEXT?

In architecture there is no difference between an urban set and a naturalistic set. The language may change, but the approach is the same. For example, the Austrian pavilion is an urban project, though from a formal viewpoint it translates into a forest; the Mur Tower, another recent work (seen on these pages, ed.), is a landscape project that materializes in an ‘intelligent’ steel structure, a work of architecture capable of linking space, time, experience and emotions.

A PROJECT THAT DOES NOT GO UNNOTICED…

The aim of our works is to create buildings that are not separated from the landscape, but we are not interested in operations of camouflage, as the Mur Tower demonstrates. We design in terms of collaboration between the building and nature, setting out to fully respect the host site.

For example, when we began to work in the Mur River valley, a place of uncontaminated beauty, to build the watchtower we studied the flows of air, the prevailing winds, the climate, the light: in short, all the landscape and weather characteristics with which the new building would have to live. We also chose the materials very carefully: through the reflection of light on the aluminium structure, the tower changes its color, passing from white to blue to orange: which is just what happens in the surrounding forest, which changes with the passing hours of the day. In short, the architecture changes with nature, living with it and for it.

HOW IS THIS OBJECTIVE CONCRETELY ACHIEVED?

With a multidisciplinary approach. Complex problems can only be solved by a team that combines different kinds of know-how. In the future, in particular, I think cooperation between architects and meteorologists will be increasingly important, because design is more linked to major climate changes that are happening on our planet. The climate-designer can become an important professional figure for the architecture of the future…

WHAT ROLE DOES THE PAST PLAY IN ALL THIS?

The lesson of history is always there. The Mur Tower is a tribute to the Castle of Graz, the extraordinary Baroque fortress built by Frederick III: Christoph (Mayr, partner of the Terrain studio and co-design of the project, ed.) and I were inspired by the famous double helix staircase of the 16th-century building, where visitors – ascending and descending on two different ramps – can have the fantastic experience of crossing space with time. The same idea lies behind our lookout tower on the Mur River. Today, then, like yesterday.