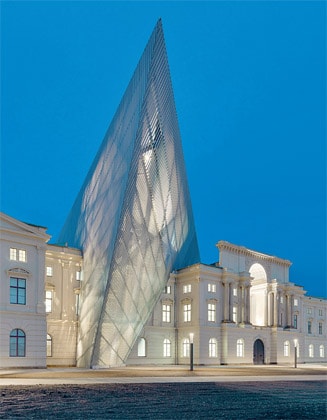 To grasp the meaning of the project that won the competition held in 2001 for the expansion of the Military History Museum of Dresden (20,000 m2 of museum space) we may need to set aside the tools of architectural criticism and turn to those of the visual arts and, in particular, of sculpture.

Because sculpture is the world of the large metal wedge, the tip of a big arrow that crosses the main volume from behind the museum, overlaying and marking the neoclassical facade of the old armory (1876). Libeskind’s grafting reminds us of certain works by Claes Oldenburg, like a Pop gesture, filtered here in symbolic terms by that violent, dramatic sign of conflict, a volumetric metaphor of destruction transformed into a complementary feature of the building on which it rests and with which it is integrated on the level of internal space. The monolithic element reveals its lightness in the evening, when the interiors are lit and the light shines through the metal texture of the cladding, revealing the overall structural framework. The concept of counterpoint, outlined by Libeskind in a recent lecture organized by INTERNI during the FuoriSalone 2012, emerges here as a leap of scale, a clear compositional contrast, that makes the sculptural act the theme of the architectural expansion of the museum spaces. While in other projects, like the recent Crystal Mall of the CityCenter in Las Vegas, the dynamic character of the compositional approach is resolved in the staging of the building itself, simulating the implosion of the construction and its rebirth on its own sparkling rubble, here in Dresden Libeskind has to come to grips with history. Represented not only by the theme of the museum, but also by the historic building that is interrupted by the new grafted volume, a five-level glass and steel organism like the inclined prow of a battleship that has run aground inland, slicing through the facade in a surgical way, without producing ruins, in a perfect interlock. The striking effect of a dynamic force halted at the moment of impact brings out the sturdy character of the 19th-century building, and the classifying organization of the museum collections that are revitalized by the new expansion, with spaces of different types for temporary exhibitions and permanent displays. The conflict between old and new continues in the interiors where oblique exposed concrete walls cut through the partitions of the old structure with its decorated ceilings, constructing an expressionist setting with dramatic lighting, trajectories that follow the dynamics of the displayed fragments, like the diagonal that follows the rain of bullets and bombs hung from the ceiling, or the surface on which a crashing helicopter is attached, alongside a suspended walkway. A museumscape that activates a clash with history and the constructed site, to conserve the tools of conflict: the Dresden armory, with its severe neoclassical figure, pierced by the balanced choreography of a new urban figure.