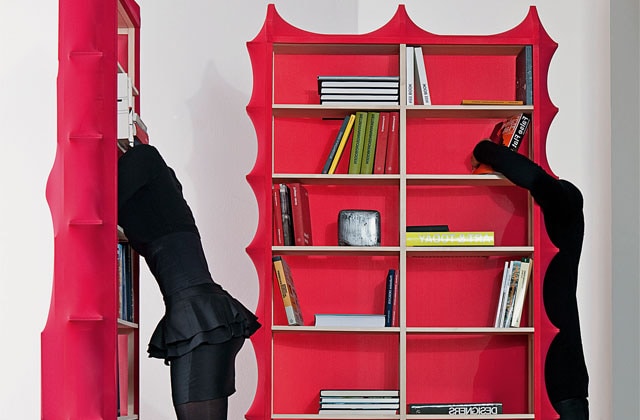 “A tubular elastic knit fabric normally used for clothing can be applied to make a lampshade”, Bruno Munari wrote in “Da cosa nasce cosa - Appunti per una metodologia progettuale”, published by Laterza in 1981.

The example, in reference to his Falkland hanging lamp designed in 1964 and still in production, in the Danese catalogue, belongs – together with the “graduated cylinder that can become a vase”, or the blanket that becomes a cloak – to the category of reflections on recycling.

Considering certain recent projects, it can represent not only an example of transformation, but also an illustrious precedent for research on fabric used as a flexible skin to give form to furnishing objects. The furnishings of the Spaziale series by Lanzavecchia+Wai, presented in 2010 during Design Week in Milan, are direct descendents of the Falkland model. The skeleton is a light metal structure, while the body is made exclusively with an elastic fabric held in tension, giving the objects a mutant character: they deform to adapt the profile to the content, offering greater containing capacity. In the exhibition “Pelle d’asino (Donkey Skin)”, installed by Patricia Urquiola with Martino Berghinz at Abitare il tempo in Verona in 2006, the work of Studio Urquiola was a reflection on the idea of skin in design. The princess in the fable by Charles Perrault, who changes her identity by hiding inside a donkey skin, is an effective metaphor of the decisive impact of textile skin to define the form and appearance of objects, making them mutable, embellished, softer, changing their tactile qualities and therefore our perceptive experience of things. The lamps of the LuxLuxLux collection by Dunja Weber+Cécile Feilchenfeldt, shown at the Salone Satellite 2010, have a light metal framework covered with a special blend of nylon, elastane and rubberized thread. The fabric similar to tulle developed by Cécile is adjusted in soft, irregular folds that give the fixtures a variable, unstable profile. In the series Dressed Up Furniture by the Korean studio Kam Kam thick felt entirely covers the wooden structure, attached with tailored details, altering the consistency of the objects: what is normally hard becomes soft. The silhouettes of the containers, generally squared with sharp edges, are smoothed to generate a friendlier image. To dress up what is normally offered nude changes its identity. The garment is no longer a finish, it intervenes in the definition of the substance of the product. A similar proposal is made by Sigrid Stromgren (Satellite 2010), where the textile part – padded and enhanced by capitonné work – is not a garment fit over a form, but a structural component: the doors of the cabinet. The Coiling Collection shown by the Fat gallery of Paris in November 2010 represents a chapter of the research of the London-based Raw Edges studio, on the structural use of unconventional textile materials. Long strips of felt (326 meters in all) are rolled into three-dimensional forms to create different furnishing elements.  One side of the felt keeps its original softness, while the other is saturated with silicon to add body. The production method resembles the tailoring technique of bondage: a wrapper that alters the silhouette. In the case of the Spook chair by the Berlin studio Iskos, presented at the Fair in Stockholm (Feb 2011), the felt is adjusted on the profile in soft folds with a technique similar to the dressmaking method of moulage, leading to an unusual formal variation. Finally, the change of identity can also depend on textile patterns. This is the case of the Tattoo hassock by Cerruti Baleri, with a photographic cactus print. This latest version (2010), still by the stylist/designer Maurizio Galante, is so realistic that people tend to check on the situation before sitting down, to avoid getting ‘stuck’!