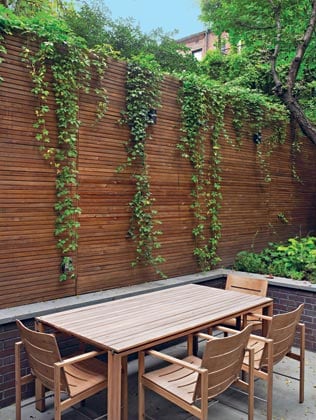 The design of an addition to this building in the heart of Chelsea, in New York City, is one of the most recent projects of the studio Archi-Tectonics, headed by Winka Dubbeldam.

A townhouse in stone and exposed brick, with the classic long, narrow layout, which the architect – born and raised in Holland, trained at Columbia University under the guidance of Bernard Tschumi – had already renovated a few years ago. The new extension has been made to contain two more floors and a roof garden. The same client, a fashion designer, and the same architectural approach: a series of compositional grafts of an organic-sculptural nature, based on strong materic character and lightness, as if cut out of sheets of paper, while also evoking the image of certain bronze totems of Constantin Brancusi. The novelty lies in the configuration of the inclined curtain wall that sets the pace and the texturized effect of the facade towards the flourishing inner garden. The result of geometries organized with sophisticated 3D models, the wall is like a fluid membrane of steel and glass, a bent and curved grid that becomes the protagonist of the spatial construction, offering light and dynamic visuals. Mixed with the insertion of burnished rosewood planks and glass doors offering direct access to the garden and the terrace, it acts as a filter and connector of the four levels of the present dwelling. The floors are organized as follows: the lower level contains three zones for guests, office-studio and library; the level above (corresponding to the zero level of the entrance) is for the living area, an open space containing living, dining and kitchen zones; the first floor hosts the master bedroom suite, with direct access to the terrace-belvedere. The second and last floor contains two more bedrooms, a large bath and a TV room. While at level -1 of the garden there are three large pivoting glass doors extended along the length of the facade to play an unusual visual role – they project the figure of the library outward, as if it were part of a continuous living area – at the entrance level the external staircase with wooden steps and a metal railing permits connection to the green island, created at the lower level. In this portion of the house that encloses the living zone, the facade takes on the role of a glass curtain wall, an interpretation of the Cartesian geometric grid in a field of continuous transparency. By contrast, the linear design of the interiors reminds us of the open, flexible layout of American lofts. But this would be a loft with a more romantic, intimate atmosphere, rather than the rugged postindustrial tone of the archetype, as underlined by the carefully selected materic-chromatic range, with wood from Siberia used for all the floors. Or by the presence of a large stone fireplace in the living area, a full-height monolith that blends with the gray walls conceived as neutral backdrops, and the frosted glass of the design kitchen produced in Italy (Valcucine). In the overall orchestration, another element becomes a protagonist: the full-height wooden spine, milled and sculpted on both sides with numerically controlled machinery, and set on a structural metal cage, which is the main element of compositional reference between the living room and the area of the entrance and the landing of the staircase. Like a dynamic boiserie, it functions as a spatial diaphragm, integrating two sliding portions that permit flexible use of the spaces, while the suspended ceiling contains indirect lighting fixtures in special recesses. This latter detail is important, because artificial and natural light are outstanding features of the house. Especially the zenithal light that enters from the skylight in the roof above the internal staircase connecting the two new levels.