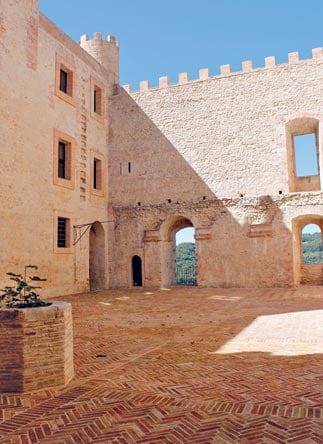 The challenge is daunting when your counterpart is an architect and painter, a student of Bramante and friend of Raphael, like Baldassare Peruzzi, from Siena, responsible for the transformation of this fortress originally built in 1084, to create a splendid castle in the late Renaissance.

As narrated by Claudio Silvestrin, himself an outstanding name on the international stage of contemporary architecture, called in for the art direction of the restoration and conversion of 3000 m2 as a residence for a family with small children, ready to welcome many guests and an important art collection (displayed in a space of 1000 m2). Even for a master of the minimal this face-off with a key figure of the Renaissance, appointed architect of the Fabbrica di San Pietro in 1530 (his most famous works include Villa Farnesina Chigi and Palazzo Massimo alle Colonne in Rome), and with a building that has been listed as a national monument since 1928, must have been rather problematic. He explains: “though the building required almost nine years of work, perseverance and dedication, I wanted the restoration to be ‘invisible’ so that once completed, the castle would give the first impression of never having been touched at all.” An approach aptly defined by the expression “minimum ego” to emphasize the fact that the architectural-historical context was so strong and majestic that it reduced any intervention to a sort of focusing, to respond to new needs in the least arbitrary way possible. Without concessions to fashions or trends, without evident signatures. The castle overlooks one of the many charming towns of central Italy. With a very irregular, almost zoomorphic footprint (like the form of an eagle with its wings spread, for some, or that of a scorpion, for others) due to the need to anchor it to the rock and to adapt to the contours of the terrain, it is composed of about 100 sober, severe rooms, on three levels, connected by narrow spiral staircases pressed between solid walls of dizzying height, all the way to the terracebelvedere on the roof with its view of the hilly landscape. The south wing is for the guest quarters, the north for seminars, workshops, events and exhibitions, also hosted in the basement (where during restoration a snow cellar was found, with a depth of 7 meters, a kind of natural refrigerator packed with ice and snow). The central part contains the palace, with the piano nobile and frescoes. “Not one centimeter of the walls, floors, ceilings, arches, barrel vaults or wooden beams has escaped the intention of a direct link with the spirit of the place. The idea was to complete an accurate reconstruction of the zones, taken as the founding nucleus of the Italian cultural heritage. And the restoration was relatively simple, because it involved simply cleaning, repairing and reconstructing in a conservative way, with the help of the heritage authorities, also for the frescoes that decorate the spaces. What was more complicated was the intervention on the 30% portion of new construction, as required by the client. To think of new forms in the areas considered ‘untouchable,’ transforming them into spaces for everyday life. I was trained to believe that architecture has the job of giving us the emotion of material, space, light, water. An abstract, spiritual, almost metaphysical attitude. I believe in the beauty of archetypes – cylinders, spheres, cubes and parallelepipeds – which go beyond the temporal dimension; in this sense, a form can be 6000 years old and still be contemporary, communicating the same force and the same intensity.” In a paradox, then, Silvestrin has stripped down the spaces even more, rethinking them with an indispensable minimum of elements. To make them even more empty and powerful, ancient figures that rediscover vitality, tactile charm, impenetrable, crystalline, full of opaque and transparent features, surfaces, air and light. The goal is to enter the context on tiptoe, first of all in terms of materials and colors, using terracotta for the floors of the ground level and the basement, natural Travertine and chestnut wood (typical of the zone) for the piano nobile and the guestrooms. A way to reinforce, with a new patina of time, the link between the castle and its territory. In terms of shadings, thickness, image. The limewash applied evenly to the walls in an ivory tone brings out the dark casements, the glass doors and exposed wooden beams. And then the light, that light that springs from a balance between openings and the bulk of the volumes, with cuts in the walls and floors, coexisting with the shadows. In this sober, severe atmosphere, the fixed furnishings stand out. “Everything is Made in Italy. By the book. In the bathrooms the water is gathered in round basins of Travertine, resting on chestnut counters, while the tub is excavated in the stone like a big walnut shell. In Travertine, like the floor. The only standard production pieces are the kitchen and the lamps, because their essence reflects the thinking and the ethics behind the project: pursuit of essence.” The achievement is there to see: the castle is not the Cabanon, not a cube of limestone, but even in its way of being perceptible only in fragments, it conveys a sense of visual order, of calm for the eyes and the mind.