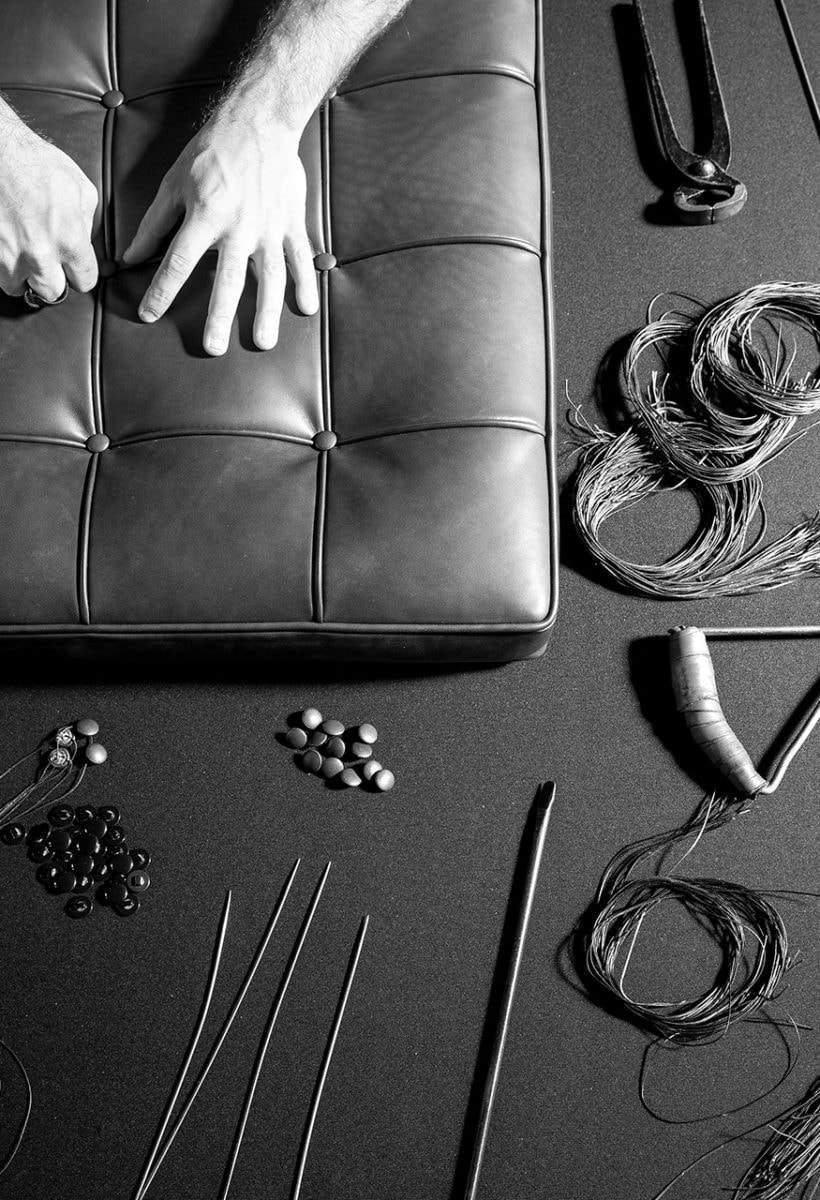 Thanks to the visionary foresight of Hans and Florence Knoll, in 1938 a brand was born that has become a symbol in the history of design. their ideas about the spaces of life and work still provide a very timely model today, updated in the interpretations of leading exponents of international design

Eighty years ago, in 1938, one of the most solid and prolific companies in the history of furnishings was born: Knoll. The firm founded by Hans Knoll took form thanks to his encounter with Florence Schust Knoll. Their bond coincided with the creation of a company that was immediately based on brilliant intuitions.

First of all, the idea of creating an ‘international’ business, of thinking about a united world in a moment marked by one of the most destructive wars of all time, and by total geographical and political division.

The second farsighted intuition was to think not about individual pieces of furniture, but about settings, the dialogue between furniture and space, in search of an overall harmony.

Today, years later, their ideas have become reality: the globalized market, the nomadic character of furnishings, a habitat made of various elements capable of performing multiple functions. We talked about all this with Andrew Cogan, Benjamin Pardo and Demetrio Apolloni, respectively CEO of Knoll Inc., executive vice-president Design of Knoll Inc., and president of Knoll Europe.

Hans and Florence Knoll put together an incredible team, a remarkable mixture of great masters and young talent, creating a catalogue in which the “sculptural” pieces were inserted in a harmonious framework of “architectural” pieces (as Florence herself called them, though she also used the expression “meat and potatoes”). Has this direction of choices served as a guide for you as well? How did you decide in recent years on names like Frank Gehry, David Adjaye, Piero Lissoni, Rem Koolhaas, Barber and Osgerby, and Marc Newson?
Andrew Cogan: We are always looking for those established and emerging architects doing interesting work on an architectural scale who are truly committed to the design and development of a furniture collection as an important engagement on its own, as opposed to a “shrinking” of their architectural work. Those who approach it as a chance for true R&D and investigation of materials and processes given to mass production are always the most successful.
Benjamin Pardo: This factor of the mix is still fundamental for us today, because what sets Knoll apart from the others is the fact that we do not make single products, but try to find a balance between sculptural and architectural, designing for complete spaces. This is why the ‘starchitects’ can be our counterparts, since they are outstanding professionals who work in close contact with the needs of users, and know how to precisely pinpoint what is lacking to complete their architectural projects.

What role does pure research play in this identification of the right designer?
Benjamin Pardo: In our catalogue, there are products we might define as being more a matter of ‘research,’ not developed as a direct response to the demands of the market. They might have to do with a typology, but also with a new material, perhaps transferred from other industrial fields. The point is to manage to intercept these new ideas and to make them enter the company; even if they do not necessarily translate into a product of immediate commercial success, they have somehow been absorbed.

Speaking of research, once again this year you have called on OMA to design the booth at the Salone del Mobile. This studio has always stood out for its accent on theoretical research: what is their interpretation of your corporate identity, in this case?
Demetrio Apolloni: Since 2013 we have paid particular attention to the design of the booth at the Salone. Here, as in all the solutions created for Knoll, OMA has been able to underline the contribution of our founders to bring the benefits of modern design to both residential contexts and the workplace. In previous years the booth focused on Mies van der Rohe, while this year the project concentrates on Breuer, particularly the Whitney Museum of American Art.

We might say that at the start, above all thanks to Florence, Knoll taught Americans the European language, and vice versa, playing the role of a major cultural bridge. Today, now that the world is more unified on a commercial level, how is this situation perceived?
Demetrio Apolloni: Globalization is very evident, and what succeeds most in this sense is the brand, rather than the product per se. In Japan Knoll is a brand known for its historic role, and the same can be said of Brazil or France. Even today, Knoll is definitely ‘international.’ We should remember that the company was founded in 1938, but it exploded in the postwar era during the reconstruction, when there was more demand than supply (today that relationship has practically been reversed). In that moment, Knoll had the intuition of being global, well before the globalization of markets.

Five years ago you announced the intention to invest in the home furnishings sector, especially in Europe. What has the response been like?
Andrew Cogan: Very encouraging. We began by strengthening the relationship with our dealers and retail partners in Europe. Under the guidance of Demetrio Apolloni we have been able to move up the pyramid with our partners, so instead of just carrying a few select Knoll iconic pieces, more and more of our partners are now devoting space in their shops to our full range of designs – both classic and new. In early 2018 we completed the acquisition of the rapidly growing Danish affordable luxury brand Muuto, which has allowed us to expand our offerings, appealing to a much broader range of generations, tastes and budgets…