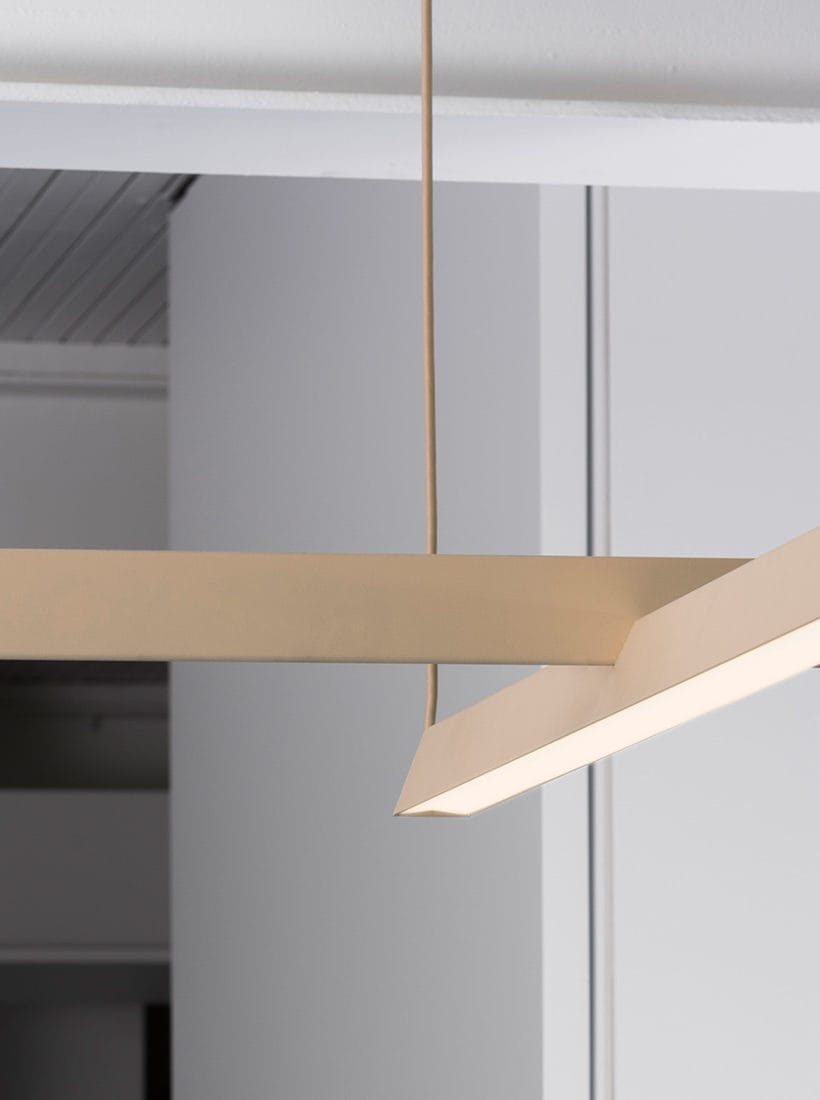 In this column we have often talked about how the dematerialization of form and function triggered by the digital is generating an equal and opposite reaction in the world of products, pushing design towards a post-rationalist approach made of objects that are so forthright as to seem to embrace ‘obviousness’ as a fundamental aesthetic virtue.

One example is the Calesco cabinet by Quentin Vuong for Ars Fabricandi, which while melding its parts into an organic whole, also shifts them into an open, disjointed body defined by the carefully unbalanced juxtaposition of volumes and segments. This ‘molecular’ reduction of the object to its basic parts – geometric solids and planes without connecting aesthetic superstructures – expresses a deep need of our time, connected with the paradigm shift of the present.

Plenty of proof of this was on view at the last Milan Design Week, as the trend consolidated and evolved towards increasing aesthetic deconstruction.

One emblematic case was the exhibit of the Canadian firm Lambert & Fils, with two projects both marked by essential and ‘lucid’ formal solutions: the Mile series of suspension lamps, designed by Guillaume Sasseville through the orthogonal pairing of slices of space made ethereal by the use of LEDs; and the Laurent collection produced exclusively for the gallery Armel Soyer of Paris, in which the typical opaline blown glass sphere of Bauhaus lamps is the stimulus for a composition of sagittal planes made with unadulterated geometry, displayed in a pure state.

A far from coincidental reference to the geometric proto-rationalism of the early 20th century could also be seen in the Krane lamp by Ladies & Gentlemen Studio and Vera & Kyte for Roll & Hill, suggesting the industrial classicism of Behrens interpreted in a contemporary way.

The widespread metaphysical minimalism of the world of furnishings is effectively the direct descendent of the early rationalist approach, which linked back to the super-historical ‘theosophy’ of geometry (Itten, Mondrian, Rietveld) to combat the cultural destabilization caused by the Great War.

Today the destabilization is no longer of a cultural order; it is cognitive, caused by the overly fast pace (in evolutionary terms) with which the digital dimension is reshaping human sensibilities regarding objects. And if the characteristic feature of rationalism lies in the conception of the object as the sum of its parts, each keeping its structural individuality intact, in recent evolutions this same approach extends to definition of the product or complement as a tactfully disbanded functional presence, gracefully broken down into pre-project constituent solids.

Just consider the Zeno table by Elena Salmistraro for Stone Italiana, or the Rabbet vases by Patricia Urquiola for Budri, projects that cut marble in the direction imposed by precise asymmetrical axes (symmetry is to be avoided, because it is a property of the whole, while here the individuality of the parts is the key factor).

Elsewhere, Filippo Mambretti – in the Supernova suspension lamp for MOGG – adds an optical detachment to the material body of the object that exists only in a speculative space, taking the anatomical splitting of the object from the ordinary three dimensions to a fourth dimension made only of abstract geometry.

Taking objects back to their ‘elemental’ state, to their fundamental parts that cannot be further subdivided, means doing with design what Eugenio Montale did with poetry, sculpting words, or things, by laying bare their existential presence.

Nevertheless, in this elemental design we can still glimpse the faith that there is an order in the material intimacy of things, that design can bring to light by taking a step back and respecting aesthetic otherness: “Do not ask us for the word hewing from all sides / our formless soul […]. Do not ask us for the formula that will open up worlds to you, / but only for some crooked syllable, dry like a withered branch. / Today we can only tell you this: / what we are not, what we do not want” (Eugenio Montale, “Non chiederci la parola”)