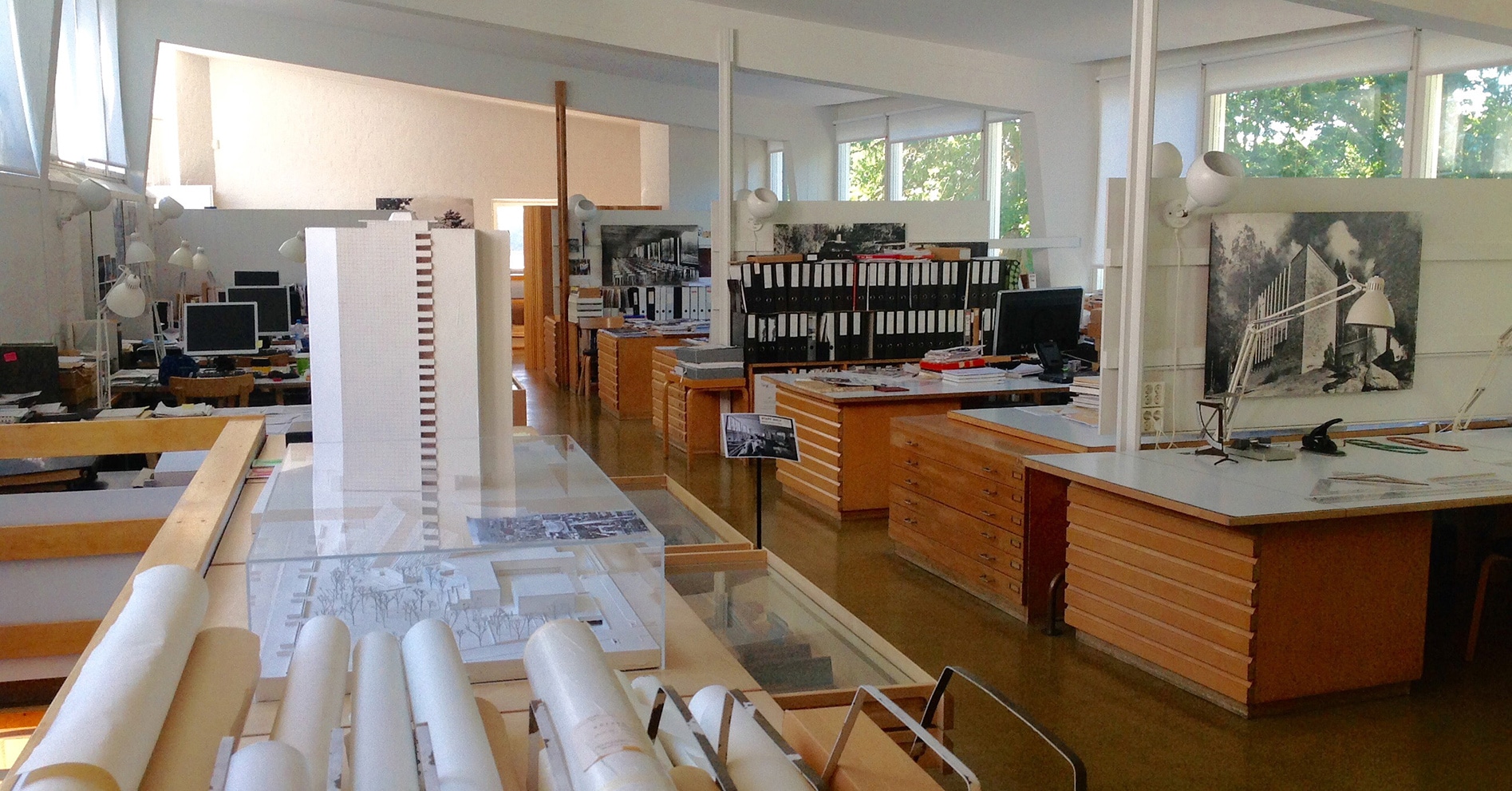 Eighty years, and a timeless collection of furniture. The company from Helsinki cre­ated by the couple Alvar and Aino Aalto, the patron Maire Gullichsen and the art critic and historian Nils-Gustav Hahl owes its longevity to the objective set by its founders, “to sell furniture and to pro­mote a modern culture of habitation.”

Since 1935 Artek has demonstrated this pro­grammatic commitment that combines technological inno­vation – especially in the area of curved laminated wood – and industrial production with a philosophy of life based on functional quality and new aesthetic canons. The Aaltos, but also national design masters like Ilmari Tapiovaara and Tapio Wirkkala, made the company a manifesto of modernity, interpreted through the Finn­ish spirit.

To celebrate its 80th birthday Artek has produced, in a series of just 80 pieces, one of the most refined experiments of the Aaltos with wood: the table designed for Maison Louis Carré (1958). Its characteristic features are the ‘fan’ legs in natural birch, a combination of five slender L-shaped slats, and the black lac­quered top that reflects the play of light and shadow inside the house. The joint system between the legs and the top is one of the Aaltos’ themes of study, also leading to the invention of Y-shaped or L-shaped legs, paradigms of contemporary design for their effi­ciency and linear image.

Marianne Goebl, managing director of the company, explains: “One of the tenets of the Modern Movement was that design should play an important role in the promotion of a new and better way of living. That ideal still informs our concep­tion of the company, and we still apply it to our collaborations with designers. Standing out for their clarity, functional quality, sustain­ability and poetic simplicity, the works of the Aaltos perfectly em­body the Artek identity. As the expressions of essential solutions, they have a timeless design. Today, when people are looking more and more for objects that last, and have authenticity, these furnish­ings are taking on renewed importance.”

Recent collaborations in­clude those with Hella Jongerius, who has introduced color in cer­tain classics, Konstantin Grcic and the Bouroullec brothers, who have reinterpreted the Aalto legacy in design. “In the Rival swivel chair by Grcic,” Goebl continues, “the reference is in the visible con­struction and the different clearly assembled parts. It obeys the principle that the back, in laminated birch, curved using the tech­nique of the furniture of the Aaltos, should be directly joined to the seat.

With the Kaari collection, the Bouroullecs draw on the Finn­ish designers’ constructive approach: a simple principle applied to different product types. Kaari is based on a single component, a metal band used to support tables, desks, consoles, shelves. The system combines the traditional Artek materials in a new way with glossy laminates, a novelty for us. Rival, on the other hand, is the first swivel chair in the collection and introduces techniques we have never used before, like injection-molded plastic and die-cast aluminium.”

The company’s future lies in building on its cultural heritage, rather than disrupting it: “Which means, Goebl concludes, “respecting the classics – many of which are still relevant, while others need to be adapted for contemporary use, while others still are no longer timely – but also developing new products with de­signers who share the approach of the Aaltos. And in times and ways that respect the size of the company and the longevity of the collection.”

Alvar Aalto designed his ‘paradise’ for working in 1954 in Helsinki, in the very green oasis of Munkkiniemi, a ten-minute walk from his home, his second ‘paradise’ for family life (1935/1936). Behind every design effort there was the “desire to demonstrate that it is possible for man to construct a paradise on earth… and that this is the sole purpose of our homes,” he remarked in a famous lecture given in Malmö in 1957, entitled “The Paradise of the Architect.”

Today as in the past, that harmony of living can immediately be sensed upon entering the studio of the great Finnish master: a place made of light, nature and design, which transcends the mere concept of geometric space. “Here Alvar Aalto studied every detail, not just in functional terms, but also sensorial and emotional terms,” says An­nukka Pakarin­en of the Alvar Aalto Founda­tion, leading us through the very luminous rooms of the studio during a special tour organized for Helsinki De­sign Week (8/11 September 2015).

She shows us the favorite places (and furnishings) of Aalto for working: a pale table with an armchair in curved wood and leather, in front of a large window on the first floor overlooking the greenery of the garden; a corner bench in the dining room on ground level, with a view of the tables where friends and staff took their meals, to be able to chat with everyone but also to peer outside, through the foliage; the small outdoor theater, with steps cut into the lawn, looking towards the pale outer wall of the building, which could be transformed into a screen for showing pho­tographs and films; or the small meeting room where models and drawings are magically lit by a blade of light cut into the ceiling.

The most surprising aspect is that the studio still seems to be inhabited. Because every piece of furniture (the whole Artek collection was born here, and tested in direct use), every single object (rulers, t-squares, pencils, rolls of tracing paper) releases a singular energy, a unique sensation, charged with emotions: in short, there are many ‘details’ in paradise, that still reveal just how new and original – and valid even today – was the research on the meaning of habitation conducted by the great Finnish architect. An extraordinary synthe­sis of technique, form and poetry.