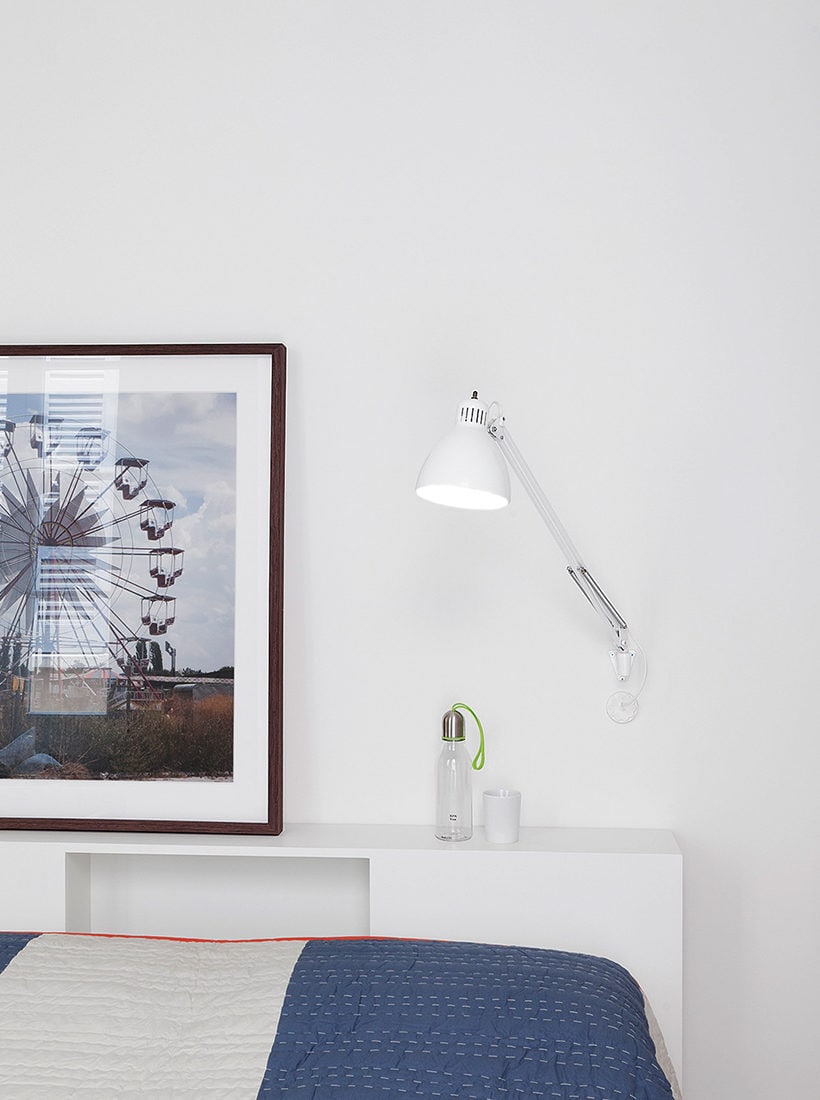 #Milano
Everything is illuminated

We reached Arch. Emanuele Corte by phone in New York, where he was supervising the opening of a new office, besides those in Milan and Turin, of Vemworks, the architecture and industrial design studio he shares with his partners Vittoria Fiorito and Marco Dellatorre.

Our conversation focused on a very recent project in Milan: the redesign of an apartment of modest size, in the heart of the historic city.

What were the needs of the client?
The first thing we were asked was to create a space that was not a family home, but a place to welcome guests exploring Milan. Therefore a very functional, minimal, easy-to-live space.
Not encoded, though, but full of atmosphere and personality. Which was not so easy to achieve, due to the particular form of the flat, with very high ceilings but also with problems of layout and lighting.
The 100 square meters of space were deeply wedged into the first floor of the building – a historical construction of great value – where one side was nearly without openings, and the other faced a small, rather dark street. In short, we had to help the house to breathe, so to speak…

How?
First of all by choosing white as the guiding color, from the walls to the furnishings, in pursuit of a quiet elegance, and then by thinking precisely about the lighting design, which became the fil rouge of the whole project. The main idea was to create a soft, ‘secret’ glow, where the lamps were not too evident, except in specific cases.

Examples?
I’d start with the ‘cut’ on the ceiling: it is a luminous path (with an LED strip inserted in a groove) that runs along the load-bearing wall of the house, leading the guests to the entrance to the bedroom zone. Then there are the luminous beams of the living area, recouping the typical structural features of this historic Milanese building while transforming them into lighting elements (here too we have used hidden LED strips).
Or the wall lamps in the bedrooms, white signs on white surfaces, therefore almost  invisible, but providing light that rises upward to underline the height of the ceilings. Of course there is also lighting for specific functions, over the dining table or for furnishing elements, like the ‘off-scale’ table lamp in the living area.
The winning idea was to use a range of different configurations: it helps to provide changes of the lighting scenario, adding accents, creating a game of lights and shadows that has something magical about it…

How did you fix the problematic layout?
Again in this case the task was not easy, due to the deep, narrow form of the apartment.
The kitchen, for example, extends curiously into the corridor between the daytime and nighttime zones, completely disguised by a wall closet.
The entrance opens directly onto the dining area, while the living room has been given a large, comfortable volume. The two bedrooms are on the opposite side: access is regulated by two doors set into two non-orthogonal walls that create a pleasant and unusual effect of perspective.

And the furnishings?
We were lucky because we had ‘enlightened’ clients, lovers of art and design. So the house is punctuated by historic pieces by the masters of the 1950s and 1960s – Gio Ponti, first of all – purchased at international auctions, and production pieces, always consistent in terms of style, design and historical context: from the iconic shell chairs by Charles & Ray Eames to the timeless curved steel chair by Mies van der Rohe. There is also a decor note, with wallpaper that creates two evocative wings in the bedroom, and in one of the two bathrooms.
There is also a touch of nostalgia on the part of the owners, who wanted some signs of their Piedmont roots. In the living room and the entrance niches contain four antique portals salvaged from the house in Piedmont from the 1600s, enhanced by lunettes with reproductions of 18th-century works by the painter Giambettino Cignaroli, printed on antique-finish glass.

In short, minimalism with heart?
Of course. Pure design doesn’t mean sacrificing poetry and personality. The space has to be able to grant emotions and wellbeing to its inhabitants. Vemworks always works with the ambitious objective of creating unique spaces, far from standards and archetypes.