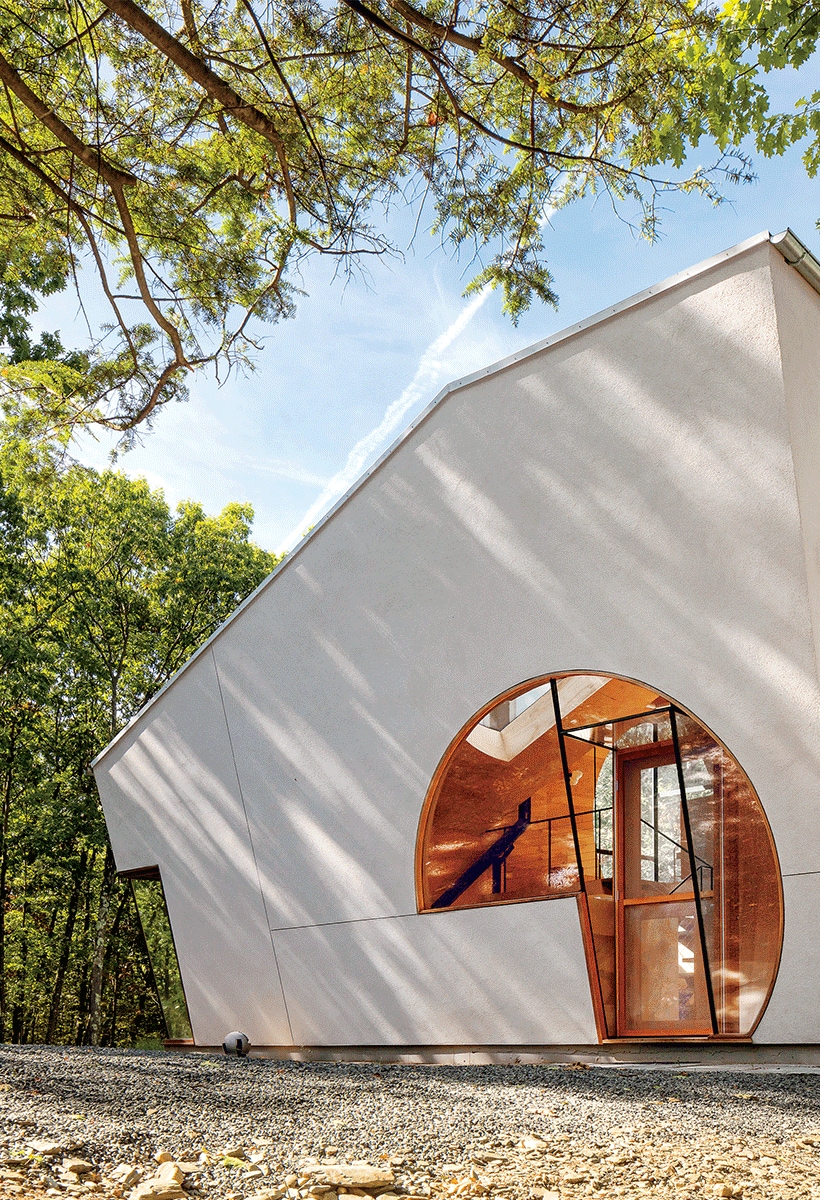 Ex of IN House

#architecture
Ex of IN House
In the forests of Rhinebeck, on the hudson river in upstate New York, the ‘ex of in house’ is part of an experiment on the theme of the single-family dwelling, organized in five separate projects, which steven holl architects has been developing since 2014 to get beyond the clichés of modernist and vernacular construction

In recent years the research of Steven Holl has approached various project scales, from master plans and large projects in China to museums and art institutes, skyscrapers and universities, where the theme of the porosity of the architectural enclosure, the intersection between geometric forms capable of ‘excavating’ and shaping surfaces and spaces, has been a sort of constant, a red thread that runs through the various typologies and each specific solution.

The genre of the single-family house, a typology addressed by Holl since the start of his career, has remained a fixed point in all his design research, as can be seen in the project for the ‘Ex of In House’ illustrated here. This small, dense work of architecture, which contains a studio/home for an artist, is part of a reserve known as T2.

It is an area of about ten hectares, with dense woods and rocky terrain, where in recent years Holl has conducted fertile experimentation on the theme of the single-family house, with an eye on getting beyond the stereotypes of reassuring vernacular or modernist architecture, to develop – as he puts it – “a language of space aimed at inner spatial energy strongly bound to the ecology of the place.” 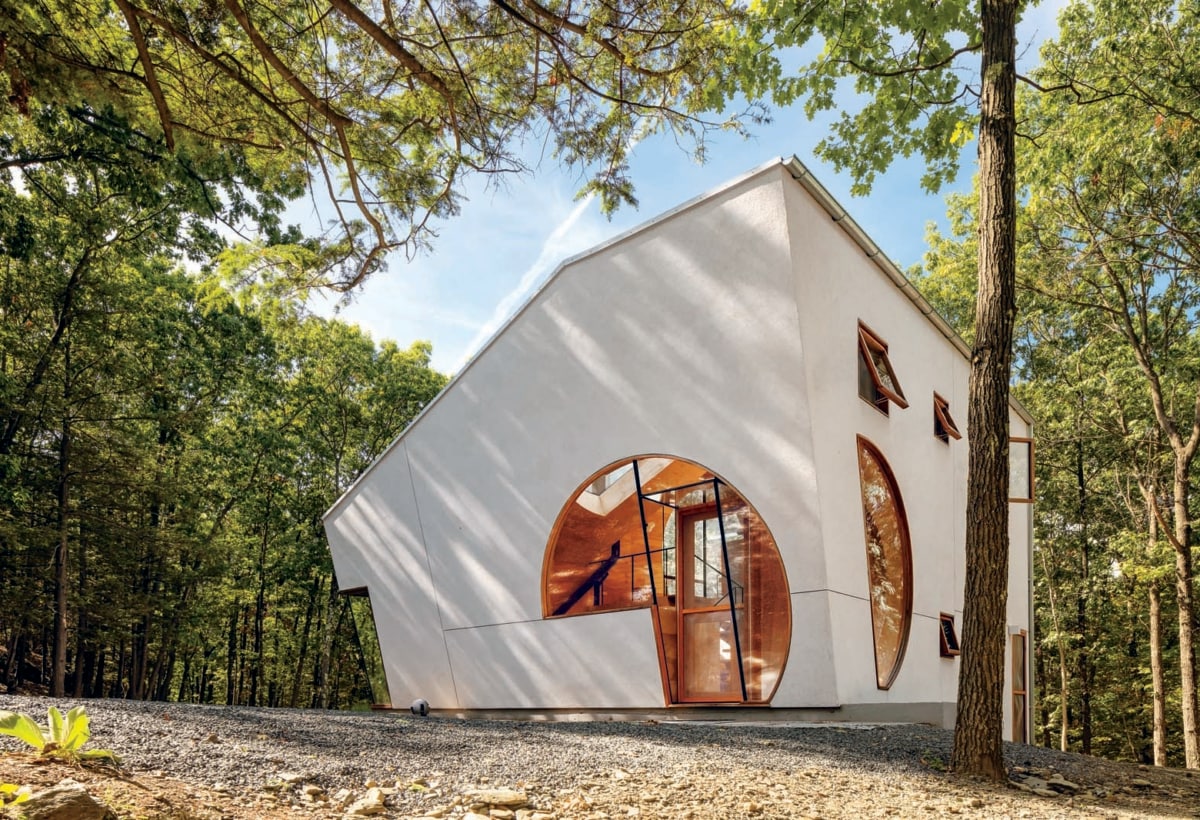 4
Photo: Paul Warchol - Exterior view of the Ex of In House; the building is formed on a compositional level by the intersection of trapezoids and spheres; the interior is like an ‘excavated volume,’ the result of carefully controlled geometric erosion.

The uncontaminated landscape is not seen as a romantic backdrop for the new constructions, but as a design component in an intense dialogue between the interiors and the external setting. The surroundings, filtered by the architectural enclosure, take on different configurations for each specific project. In this tension, Holl inserts his experimentation on the dimension of the ‘In,’ the interior approached as an excavated, porous and plastic volume, projected outward in volumetric terms defined by the ‘void’ hollowed out of the architectural ‘solid.’

To codify this complex research Steven Holl has prepared a ‘seven-point manifesto’ we are including here, in which the interior – the In – takes on a value equal to that of its enclosure.

“
In an intense dialogue between the interiors and the external setting take on different configurations for each specific project. In this tension, Holl inserts his experimentation on the dimension of the ‘In,’ the interior approached as an excavated, porous and plastic volume."

The Ex of In House has an area of about 85 square meters, a single space on various levels, with a volume formed by the intersection of trapezoids and spheres. The interior is open to the landscape surrounding it thanks to large openings defined to a great extent in terms of size and figure by the process of volumetric erosion of the internal virtual solids.

Like the sphere that forms the entrance zone, echoed by the large circular corner window, a clear illustration of the idea of a void left behind by another subtracted sphere. The shift of the house’s section, with a movement generated by cuts and shapings of the trapezoidal volumes of reference, creates a vertical dynamic spatial overlap.

The single space of the house is without bedrooms, though it can accommodate five people. The living area, raised two steps above the entrance level, opens to the kitchen placed in a central position, suggesting alternative usage modes. 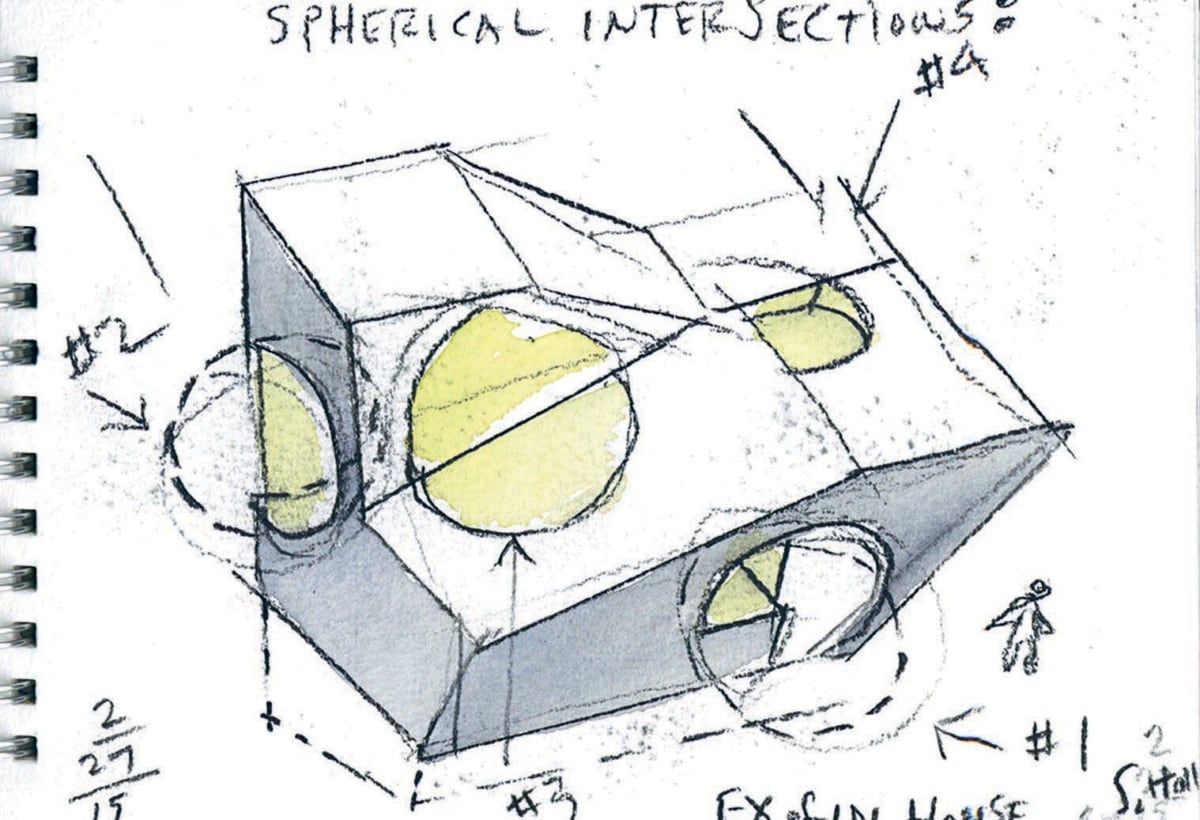 The kitchen features a custom cabinet that flanks the dining area at the entrance level, corresponding to that of the outdoor stone pavement surrounding the entire construction. The house was made almost entirely of raw materials, including floors in smooth cement, natural mahogany for the internal casements and staircase, walls in birch plywood, all for a very high level of comfort.

“
1. To study architecture freed from the purely objective. 2. From origins of architecture we explore IN. 3. IN: all space is sacred space. 4. The architecture of IN dominates space via space. 5. Intrinsic IN is an elemental force of sensual beauty. 6. IN is useless, but in the future it will be used. Purpose finds IN. 7. The thing containing is not the thing contained. (Steven Holl Architects. The seven-point manifesto for explorations of ‘IN’)"

The lighting fixtures were 3D printed in PLA cornstarch-based bioplastic. Where energy use is concerned, the house is heated geothermally, without the use of fossil fuels; thin film SoloPower photovoltaic cells are connected to a Sonnen battery energy storage system, allowing the house to be energy independent.

A residential experiment that can indicate new design paths, in which the protagonist becomes the ‘absent volume’ that interacts with its enclosure and with the host landscape.