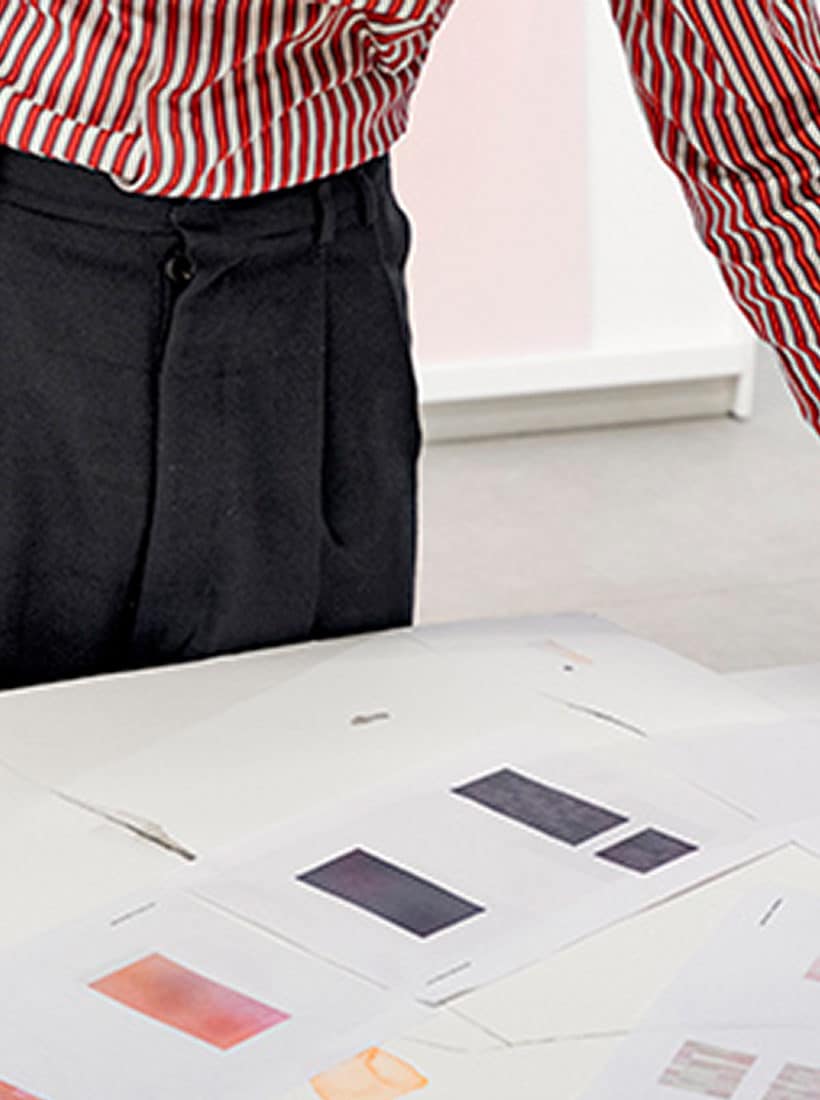 For the Salone del Mobile 2017, the two Italian designers residing in Amsterdam have presented two lamps created for Flos, as well as a project for the ceramics manufacturer Cedit, and another for the brand of objects in glass, Nude.

In this important phase of professional passage, the duo sat down with Odoardo Fioravanti, an ‘inveterate’ industrial designer.

The first thing that comes to mind is that normally, when someone starts to study design, the dream is to see a first product get produced by industry. Instead, you seem to have sought satisfaction in other ways. Today, for you, is the industrial product a dream come true, a completion, or does it mean something else?
To study design we both moved from the Italian outskirts (Sicily and the Veneto) to Florence. We chose this city in an independent and separate way, and that is where we met, instead of in Milan, which might have been the obvious choice.
Our training then continued in Holland. Already, at the start, at least on an unconscious level, we were looking for something different… maybe we were hoping to find something left in Florence of the Radical movement of the 1970s.
Today it is hard to think about industrial production as a dream. It was a dream during the reconstruction and for a few decades after that. Industrial production represents our Italian part, perhaps, which reminds us of the great legacy of our country in this sense.

What connects the lamp designed for Flos to the experiences with light conducted in an independent way?
Our first meeting with Piero Gandini (president of Flos) dates back to many years ago. At the time we talked about Achille Castiglioni, the lamps of Gino Sarfatti, and many other things.
But the desire to investigate light came a couple of years later. At first we did it in our own way, in the studio, with LEDs and transformers, glass, lenses, etc.
Almost at the same time, Vincenzo De Bellis and Domitilla Dardi invited us to work, respectively, on an exhibition for the independent art center Peep-Hole, and a show for Giustini/Stagetti Galleria O in Rome. The research then led to our designs for Flos.

A favorite lamp (one for each of you) from design history, and why.
Simone: When I was younger I was in love with the Taraxacum by Achille Castiglioni. Now I admire the entire repertoire of Gino Sarfatti. Actually, I think my favorite lamp is a light bulb!
Andrea: It is impossible not to mention the Arco by Castiglioni. Who would ever have imagined that a lamp made from a 30 kilo block of marble with a hole for moving it and a dangling arc would become an icon that has been totally absorbed by popular culture?

What is your approach to industrial design?
In our research projects we take mostly a speculative approach. In projects for industry we try to conform to the parameters of companies regarding urgency, functional quality, use of materials, focusing on a kind of design that is as timeless as possible.
The products presented in April come from the desire to combine good formal impact with minimum use of material, to avoid large volumes in the distribution and production phases.
Many people have come to us asking for a copy-and-paste of what we do as independent designers. Sometimes they tell us: “you have a new aesthetic that can also be adapted to industry.” That is never a good place to start. Luckily Piero Gandini did not approach the collaboration in those terms!

In the world of design there is often a tendency to simplify the distinction between the industrial product and the research conducted with one-offs or small series. Obsolete concepts emerge, like the relationship between form and function, reduced to a discussion of ergonomics, or a reductive vision of the one-of-a-kind piece. In the light of this experience, what is the different of thought and action in these two worlds, in your view?
There are some obvious differences. An industrial project nearly always has to have a client. So the final result comes from a specific collaboration. Often, on the other hand, in the critical analysis of the industrial product, the designer is represented as the sole protagonist. The commercial dimension exists in both sectors, but here too the interpretation of each single project has to be contextualized.
Some of our projects have been developed by us in an independent or nearly independent way; others come from a commission by a museum, a gallery or a foundation. The goals of the projects can vary greatly, case by case.
As you know, we have been involved by Angela Rui in Bio25, the 2017 edition of the Ljubljana Design Biennale. In this case, since the event has no commercial purpose, speculation can be taken to a higher level. In a context like this one, even failure can be a result, because it comes from freedom of action, trial and error. Generally our approach does not strive to create products, but to question production, taking design as a discipline capable of acting on the desires of the consumer (we say user). In this case, our position outside industry lets us analyze tensions and possibilities.

Do the new products for Flos still have the typical narrative complexity of your work?
The WireRing lamp is an exercise in reduction. We wanted to get the most with the least. The object is composed of two distinct parts: a custom power cord with connectors that transmit the electricity to an LED ring.
Usually the cord is thought of as something to hide, because it is not part of the design of the object. Instead, we have put it at the center of the design. In the packaging, the lamp is reduced to a minimum; when it is assembled, it takes on sculptural qualities. The Blush lamp, on the other hand, has more emotional impact. Usually we don’t like the idea of ‘emotional’ design, because most of the time that means seeking an effect, but the relationship between man and light transcends the functional dimension and extends into the emotional realm.
The quality of light is not measured exclusively in terms of intensity: lamps are designed to bring light to the world, but also to create shadow and intimacy. The Blush lamp starts with these consideration. It has an LED strip and a dichroic glass that project colored beams on the wall; it represents a reaction to the lack of color saturation in the winter – that is the period when we designed it, in our studio in Holland – and it brings back the memory of a long summer day.

This year you have also started working with other design companies. What can you tell us about these projects?
The work we have developed with Cedit starts with the idea that the engineering of ceramics for architecture has made it possible to obtain wider ranges of vivid colors, and large formats. But the mechanization of the process has eliminated the imperfections that gave surfaces greater depth and tonal variety.
A white was never exactly like the one that came before it, and the surfaces had different tones, just as happens with the leaves of a tree or the stones in a river. The project of the Cromatica series investigates the possibilities of color in the industrial production of contemporary ceramics. The collection is composed of two ‘base colors,’ two ‘full pale colors’ and two ‘full dark colors,’ organized on panels of large size (120×240 cm).
At the production level, the sheets combine digital printing with traditional glazing to obtain different shades and tones inside each individual panel. Each sheet is conceived to be used as a whole, or cut into smaller parts. By reassembling the tiles in a random way at the moment of installation, the non-uniform color of the panel reveals itself, in all its tonal richness.
The collection has been designed to permit mixing of the base colors with the full colors. For the development of the color chart, we focused on a vast range of glazes designed by Ettore Sottsass for Cedit at the end of the last century.