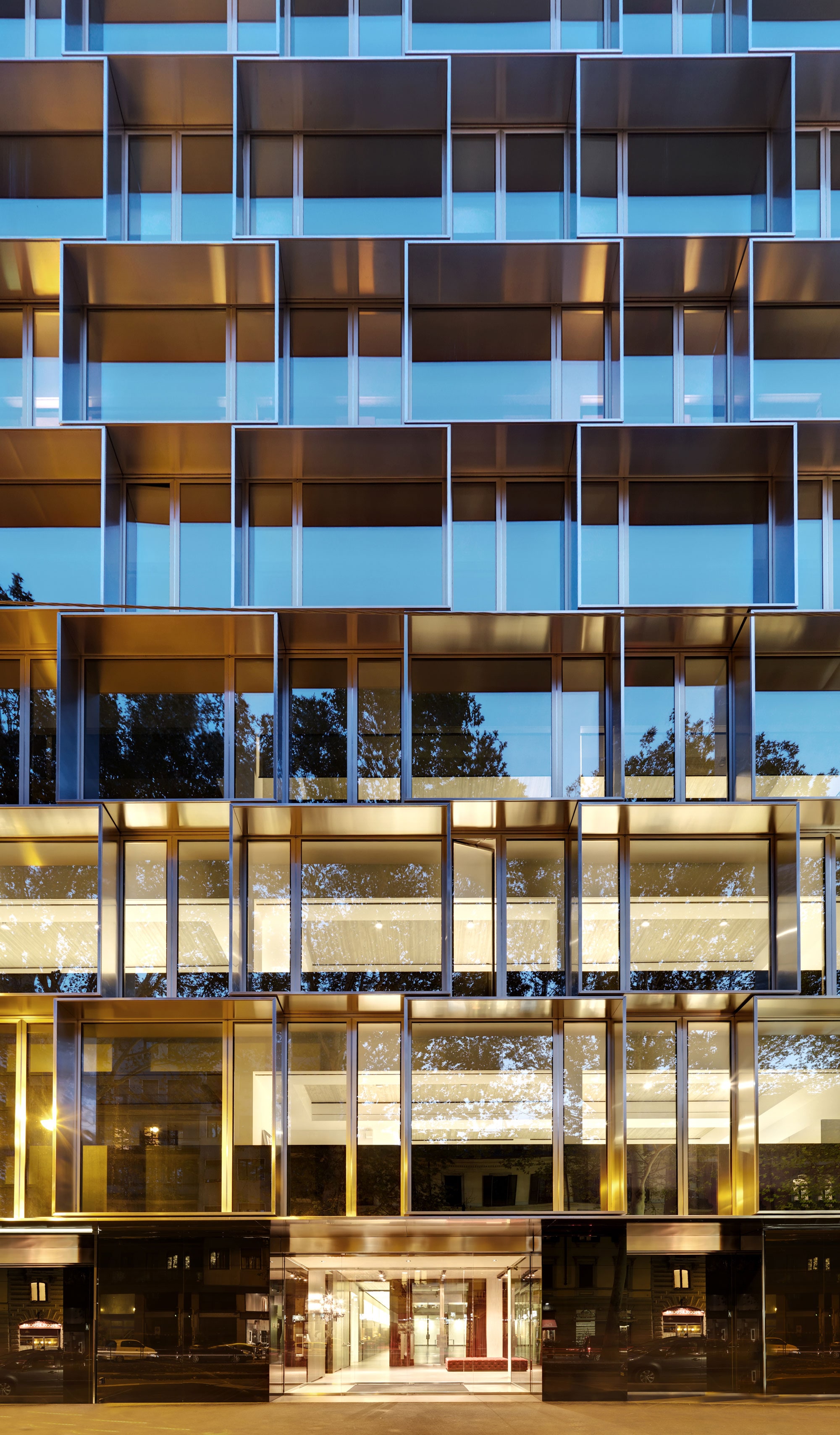 To narrate the new Dolce&Gabbana headquarters in Milan, never published elsewhere, we asked two of the four members of the PIUARCH team (former students of Gregotti, together since 1996 and the winners, among other honors, of the Premio Architetto Italiano 2013, organized by the National Council of Architects) what it means to make architecture in the ‘rising city’, and to make a contemporary building (2009-2012) in a historical context that already featured a strong existing element, which they restructured in 2005: the Metropol.

Germán Fuenmayor: “It meant, once again, dealing with the context and the grafting of the work into the cityscape of Porta Venezia, where in ten years we have design five buildings for the same client. In this case we were working on Viale Piave, where in 2005 we restructured the former Metropol cinema, now used for the fashion shows of the company, next to the new office building.”

Francesco Fresa: “This also meant taking part in the creation of a sort of ‘work citadel’ that reorganizes everything in an urban complex, optimizing efficiency. Next to the image-building for the finished product, now there are technical and styling offices, where people think, draw, make prototypes. The whole assembly line is gathered in one place: from the ‘workshop’ to the theater.”

The facade, conceived as a ‘skin of connection’ between inside and outside, rigor and experimentation, is a characteristic feature of your projects. Can we talk about a new urban landmark?

G.F: “Again, it’s the context. On Viale Piave there are streetcars with tracks, part of the city’s collective memory. Their movement became the main source of inspiration in the application of a principle of geometric abstraction that by developing references to kinetic art offers a dynamic perception of the streetfront, changing depending on the vantage point, also in relation to the quality of the light. In the case of the Metropol we looked specifically at the work Physichromie (1966) by the Venezuelan artist Carlos Cruz-Diez, evoked in the vertical sunscreen blades that pace the facade with a rhythm of full and empty portions. For this other building, we have been guided by the work of Alejandro Otero, opting for a more extended composition of square panels that organize the elevation with a sunscreen system that is staggered and overlaid, in stainless steel (like the blades of the adjacent theater) and glass, alternating in a pattern of transparent surfaces or gray tones, corresponding to the frames that open and those that are fixed. In conceptual terms, the whole complex thrives on contaminations from the aesthetic movements of the mid-1900s.”

F.F: “Actually the new facade is almost anonymous. It is light and transparent, and almost goes unobserved, as if it had always been there as part of the context. It conveys the idea of a silent architecture, without special effects, a very Milanese image: the model of reference was that of the best buildings constructed in the city in the 1950s and 1960s.”

But the existing structure has also be seen as a resource: to address the themes of reuse and volumetric grafting. What were the compositional methods?

G.F: “The long, narrow shape of the lot and the volume of the existing building suggested the opening towards the south side of its three parallel volumes, and the creation of a large, deep internal courtyard, now faced by all three: the one facing Viale Piave, the one set back with seven above-ground levels, and the central volume, connected to the rest by a system of staircases and walkways, with three stories, suspended on a volume that connects the three parts, perpendicular to Viale Piave, with four levels. This solution has made it possible to bring light to the workspaces, organized with an open plan and an essential layout – offices and areas for image and coordination, on the various levels; common zones and meeting rooms on the ground floor, open towards the courtyard – and to underline another link to the context: the reinterpretation of the Milanese courtyard building, in a contemporary language that triggers new perspectives.”

The closed courtyard is a feature of many of your projects. In the office building in St. Petersburg there are even four of them. Is it a functional feature, or does it also reflect a desire to apply a preferential model of reference from Mediterranean architecture?

G.F: “In the compositional play of volumes and spaces the courtyard comes above all from the need to create indoor-outdoor relations, creating channels for the flow of natural light to optimize everyday activities.”

So light is always a very important theme…

G.F: “Of course. It becomes a theatrical element, above all in relation to the facade-filter, which spreads natural light in a soft way inside the building, with different sensations across the day. At night, the building is like an enormous lantern, when the internal artificial light reproduces luminous and chromatic vibrations.”

Are there certain elements that contribute to communicate the image of the company?

F.F: “The use of basaltine, a dark volcanic stone, on the ground level, both in the courtyard and the interiors. As in other projects, this is an explicit reference to Mediterranean identity. Then the treatment of the green spaces on the terraces, with citrus trees, palms and agaves, typical southern vegetation. There is great attention to detail, as in tailoring, the expression of an authentic luxury, an idea shared with Domenico Dolce and Stefano Gabbana.”

G.F: “In a project of reduction and subtraction, the exposed concrete ceilings made with wooden boards for the formwork, and the beams integrated with the air conditioning and lighting systems, have a characterizing force that conceals the technical complexity of the whole.”

An evocative view from below of the internal staircase with a view of the sky. Lighting by Rossi Bianchi Lighting Design.
On Viale Piave, the visual continuity between the facades of the new headquarters and of the adjacent Metropol is underlined by the use of stainless steel and the alignment of the base on which the buildings rest. From the entrance, a visual channel draws the gaze into the courtyard.
The internal facades on the basaltine-paved courtyard repeat the square module motif, this time with panels of GRC-Glass Reinforced Concrete accompanied by glass frames, for an austere, introverted mood.
Axonometric drawing of the three parallel buildings and the streetfront: 10,000 m2 constructed in 3 years (2009-2012). The project also includes three basement levels, two of which are used for parking.
The internal staircase of the multipurpose Metropol space, seen from below, with the dynamic illusion created by the game of mirrors. The 1940s building has four above-ground levels and a basement. Totally restructured and expanded, it contains a space for events and fashion shows, some image areas and support zones for photo shoots.
The facade on Viale Piave: the cladding, made with sunscreen blades in polished steel that twist on their vertical axis, adds a kinetic effect to the front.
Metropol. The main hall, with a removable catwalk, two lateral sets of stands that can be dismantled and stored, and an elevator platform for sets, stands out for the color black used in the external materials and interior finishes.
#Design #Projects