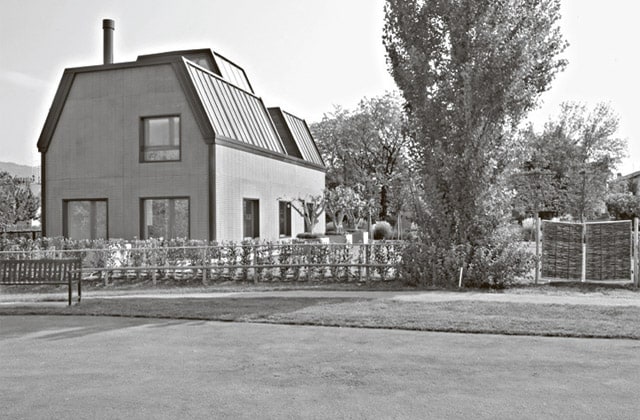 More (a name chosen for its meaning in English, but also as an abbreviation of the Moretti family surname) is the story of a shared passion that joins two generations, father and daughter, in pursuit of high-quality industrial products.

Vittorio, the father, patriarch of Terra Moretti, the Franciacortabased group working in the fields of winemaking, construction, hospitality and pleasure boats, had an insight: to bring innovation to prefabricated construction, investigating its potential. Valentina, his daughter, personally took up the challenge: to bring architecture into the industrial context. The result is More, the prefabricated house of the new generation, interpreted in five residential types offered as ‘turnkey’ packages in eight weeks. Technological, ecological, quakeproof, these units offer an innovative solution with respect to the tradition of prefabricated wooden housing, because they are completely made with a special patented concrete panel whose versatility and flexibility permit unique custom solutions. At affordable prices. The brand has been designed by Oliviero Toscani. The working team headed by Valentina is composed of five young people, with an average age of 30: the engineers Carlo Tengattini and Gabriele Meneguzzi, the architects Alberto Gasparini and Chiara Brenna, and the graphic designer Salvatore Monteduro. They interface with the resources made available by the Moretti group in its departments of Construction, Contracting, Real Estate and Interholz, over 300 persons. Supervision is still done by Vittorio, who “after the earthquake in Aquila in 2009, had the idea of finding an integrated method of worksite development to get beyond the difficulties involved in the traditional logic of construction, where the number of forces involved is nearly infinite, and cost over-runs with respect to estimates are more the rule than the exception”, says Valentina, who took a degree in architecture at Mendrisio under the guidance of Valerio Olgiati. “Olgiati taught me consistency and respect for the idea, in the choice of every project detail”, she continues. After graduation she worked in the studio of Mario Botta, “who taught me the great value of compositional harmony”, and then worked in New York with Richard Meier “where I learned about clear organization of management processes”. Specifically, the choice of industrialization has turned out to be the key for the design of the single-family home for a medium range of users. “Almost three years went into the development of the technological perimeter panel in concrete, which getting beyond the intrinsic fragility of wood (a material that needs to be protected, especially in roofs), permits definition of a solid, high-quality enclosure that can be built quickly to last in time. The panel has two functions: structure and filler. It is a sandwich composed of an internal sheet, an external sheet, insulation, a gap, the fixed framework, a truss, a darkening system and the electrical system. It can be smooth or structured, and batch-colored with natural pigments. Its basic size of 180 cm can give rise to all the typological and spatial variations of the different housing models, combining or subtracting internal dividers as desired. Each element respects the initial concept and this makes the difference, restoring the value of architecture as a synthesis of well-proportioned volumes and spaces”. In the five More proposals, we find the Casa Uno, a compact unit, suitable for tight urban spaces; the Casa-patio, with four porticos; the Casa-tetto with a roof with four pitches, again with four porticos; the Casa Q, four square spaces oriented toward the compass points, around a central pivot; the Casa-linea, a linear composition with a characteristic facade. How can you make the home of your dreams? In short, after requesting an estimate, you visit the ‘showroom’, which is an old restructured farmhouse in the forest of Franciacorta, “where together with the architects you select the best solution, suitable for your needs, choose the materials and optionals, in energy class A+, and the best eco-green orientation for the construction, setting a price that starts at 1700 euros per square meter, depending on the size (the smaller the house, the higher the per-meter cost). Everything is included: from the application for permits to the excavation, the foundations to the physical plant, the utility connections to the finishes, even the lights and the bath fixtures. For the management of the worksite, you can always talk with just one counterpart”, Valentina explains. The partners in the project are Poliform for the furnishings, Davide Groppi for the lighting, Capoferri for the window and door frames, Tecnoliving for home automation. Another interesting fact is that the panels are welded on-site with poured concrete, inserted from above along the joints, reinforced and connected to the slabs, forming a structural network of the construction, a single high-performance body in terms of seismic resistance, acoustics and thermal comfort. The house is also supported by a continuous foundation that guarantees ideal redistribution of stresses, avoiding high concentrations of force in the terrain. For the moment, the only More house that has been built and furnished is the prototype, the Casa Uno. “The next step will be to manage to make one unit of each type, and to continue to approach the challenge of industrialization of architecture in an innovative way”, Valentina concludes. In a time of recession, this is no small thing.