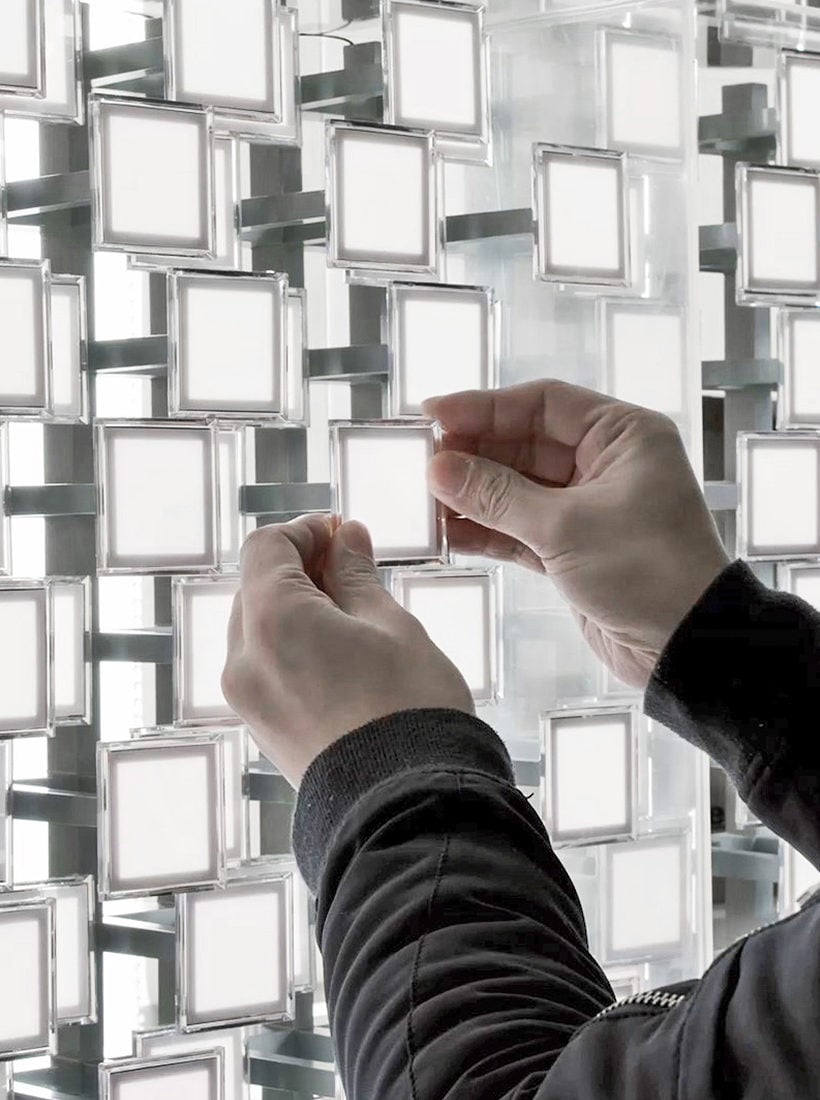 Few designers have the ability to reinvent themselves, to astonish us with each new project, while remaining solidly consistent in their approach.

One of them is Tokujin Yoshioka, a leading figure of a generation of Japanese designers that over the last two decades have brought energy to increasingly dense mixtures of Italian design and Japanese aesthetics, where the latter continues to fascinate Westerners precisely because of its difference.

The Fountain table presented with Glas Italia for Salone del Mobile 2017 marks a new phase in a design career that has always focused on experimentation with materials, especially those that are capable of interacting with light.

Light has always been a constant in the designer’s work, an impalpable binder with which to bring even the most ordinary materials to life, in all his installations, creating magical visions out of practically nothing.

This is what happened in the latest, evocative installation “S.F_Senses of the Future” created for LG during Design Week in April: not a complicated theatrical construct, but a magical tapestry of light, intangible but enveloping, capable of projecting the viewer into another dimension with respect to everyday material reality.

In the case of the Fountain table, the new project by Yoshioka for Glas Italia, light becomes tool to give movement and sensory appeal to a cold material like glass. Actually coldness is the sensation this material conveys at first glance: a single block of glass with a rippled surface, which in its three-dimensional transparency, full of reflections and nuances, reminds us of the sparkling flow of water in a fountain, captured as if by magic by a sudden frosty blast that has hardened it into ice.

This is not the first time the designer has amazed us with the invention of an apparently liquid consistency. Back in 2002 his iconic Water Block bench was made with handcrafted optical crystal, giving users the sensation of sitting on a liquid, unstable, mutable substance, like water.

From this project – and from the technical refinement of the workmanship with the material – other items were developed, like the ‘Chair that disappears in the rain’ in 2003, and the Waterfall bench in 2006, two milestones in Tokujin’s experimental path. With the table for Glas Italia, he has set off in a new direction of research, however, focusing on a process that is ancient, but utterly new for him: that of Murano and its handcrafted cast glass.

“Fountain,” says Lorenzo Arosio, general director of Glas Italia, “is the fifth project our company has done with Tokujin. Until now, he has worked mostly on the idea of the prism and the reflections of light that can be created by a glass surface. But he has always used industrial float glass, made with industrial technologies and machinery.

For the first time, this year he wanted to experiment with a more classical kind of workmanship, typical of the Murano tradition, where the manual component is very important. The glass is poured into thick sheets, then placed on a mold to be shaped and cut by hand using refined crafts techniques, for a formal and decorative result that varies from piece to piece.”

Quite a leap of scale for the designer, who is interested in processes of natural growth, but almost obsessed by control of form in his projects for design companies. This project is linked to its predecessors in a unique, distinctive way, once again, by a totally oriental ability to investigate the material in an open dialogue between presence and absence, physical presence and rarefaction, that seems to fix things in a continuous state of becoming, an unstoppable process of nature, rather than in a decisive, imposed creative act, as happens in occidental culture.

As is also explained by Tokujin’s clear taste for transparency. “I think transparent material symbolizes light itself,” the designer comments, “because it takes on consistency and visibility precisely by capturing natural light in keeping with a phenomenon that is random, not designed.

I have always been fascinated by the luminous refractions and poetic beauty that glass can express, spreading an aura that is able to stimulate our senses and to transform the perception of a space.”

The Fountain project and the magical ability of the Japanese designer to bring vitality to inanimate objects were narrated by an installation during Design Week in Milan inside the beautiful new space of Issey Miyake in Milan, also designed by Yoshioka.

In this case there were no special effects: the designer chose to very simply display the table – with 27 pieces and three model variants – in the courtyard of the store, without theatrical inventions or protective structures. The sole elements of dialogue: light, rain, clouds, the changing colors of the sky, which in their natural flow bring out the ripples and reflections of the shaped glass.