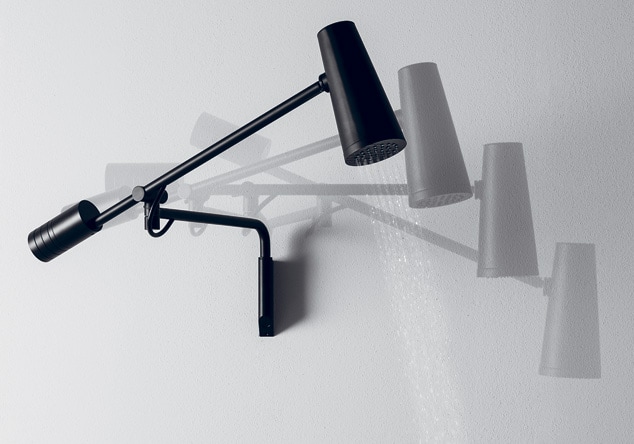 Diego Grandi has always had a taste for movement and nomadism, pursued in many of his projects.

Just consider the Monday’s cushion created for Skitsch in 2009, which can open to become a sleeping bag, a quilt, a makeshift bed for all kinds of situations. Or the Rimini chair for Casamania in 2011, which transforms a simple metal structure and a canvas into a sort of installation for sitting outdoors. Both of them are objects conceived to get out of the house, to reinterpret the traditional meaning of furnishing elements in keeping with a dynamic, non-conformist lifestyle. The same vision is behind Closer, the shower head presented in April by Zucchetti that offers a creative and functional reinterpretation of the shower column. Diego comes from Rimini, so he knows about the space problems of the typical local boarding houses, leading to design reflections on the bath environment. “Most of these spaces,” the designer recalls, “are so small that you cannot insert a shower stall. In many cases the shower head is placed in the center of the ceiling, so the whole bathroom gets wet, and the various operations of cleaning and personal care happen in a seamless continuum. I have always liked this concept, so I incorporated it in the design of Closer.” The principle is as simple as it is innovative: why are we normally forced to adapt, to move or bend, based on the position of faucets, instead of having the water follow our movements, our everyday ablutions? So Diego Grandi creates a device for the shower that instead of being fixed and rigid becomes mobile, extensible, adjustable. To give form to the idea, Diego uses what for him are the archetypes of functionality, lightness and poetry: the tubular metal furnishings of Marcel Breuer from the 1920s, but also the jointed lamps of Le Corbusier and Charlotte Perriand. The reference to the latter becomes so explicit and direct that it triggers another element of the project: that of disorientation and humor, which in the austere world of the bath becomes another aspect of innovation, which Zucchetti has approached with a truly experimental spirit. “Closer,” Grandi comments, “is a product with an intentionally essential design that actually contains characteristics of high technology. It is based on a game of different balances and complexes regulated by a cylindrical counterweight and three joints, each with a wide radius of multidirectional movement, which required lengthy engineering. The result is that the spray of water rotates, rises, lowers, shifts to the right or the left. It follows the position and needs of the person who wants to take a shower, but it also becomes functional in other situations, such as shaving in front of a mirror. Ideally, it could also adapt to a shampoo over the washstand.” At the moment Closer comes in several chromatic and materic variants, but only in the wall version. Diego’s dream is to also make a ceiling version, “so the entire bath space, not just one portion, can become the place of water.”