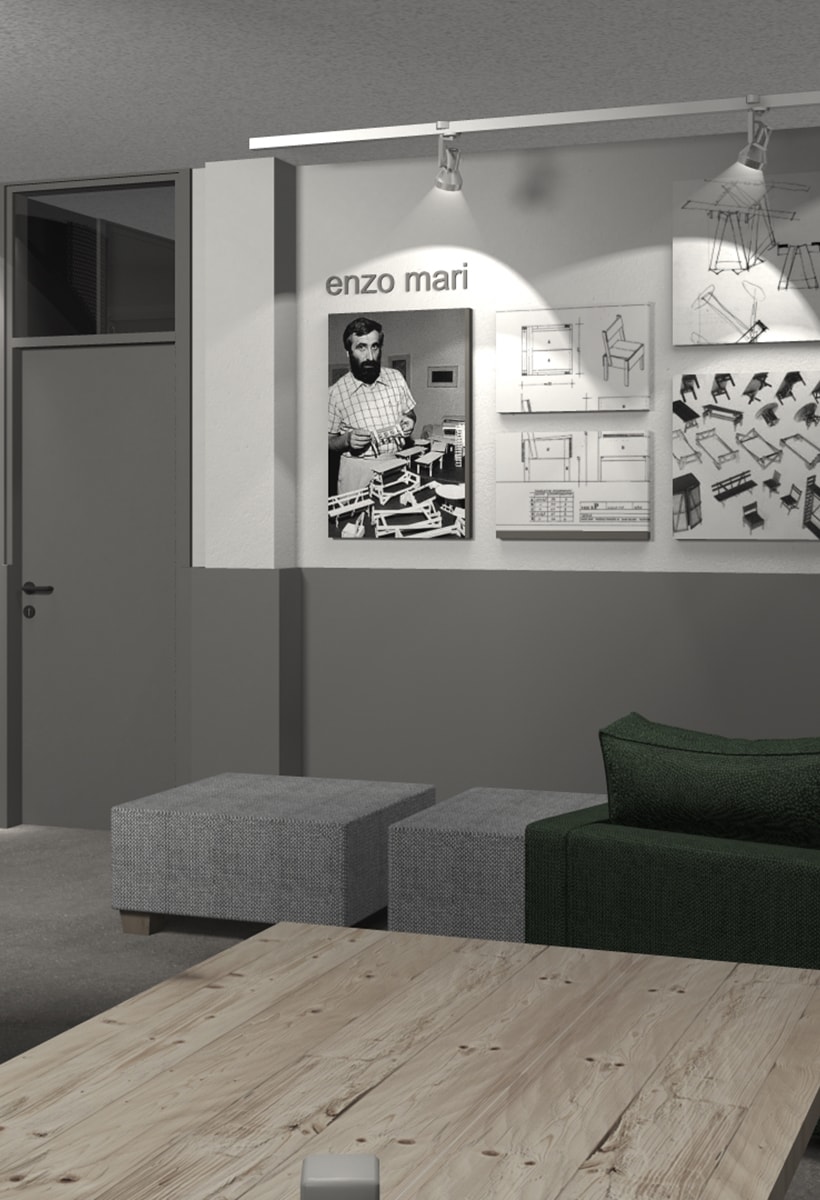 A special bike hostel is being born on Lake Garda, which from being confiscated from the mafia turns into a social design and architecture project. To put young Neet to work, promote slow tourism and involve the local community. And it pays homage to Enzo Mari

“When you have to renovate a villa, you usually start with the important interventions, you don't think about furnishing it. At Gabanel, on the other hand, we did exactly the opposite. To immediately put the kids in difficulty we follow to work, we took Enzo Mari's self-design manual and hand-built chairs, wardrobes, beds and tables. Now we are completing the construction site to inaugurate”. tell about it is Lisa Ceravolo, a degree in architecture and a job as a psychomotor and educator for the Hermete, social cooperative, which designs innovative socio-educational, recreational and cultural services, in the Verona area. “We wanted to change the sign of a place with a difficult history and transform it into a space of rebirth, an educational project where you learn, grow and stay together”. 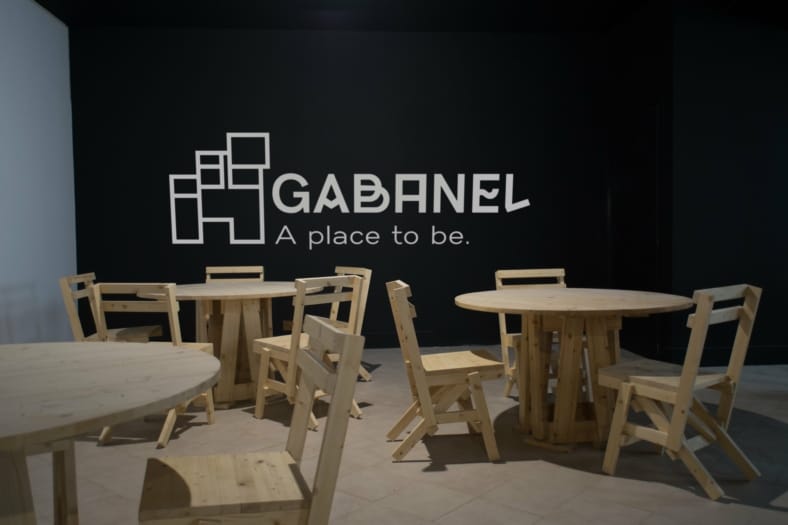 The Gabanel area dedicated to conferences and training

Gabanel is a special bike hostel

It was born from an architectural reconversion project of a property confiscated from the mafia. A group of teenagers are putting it up, nail after nail, together with two enlightened designers and a close-knit team of educators, thanks to a job placement project, which will also see them as protagonists in management. His name comes from the Gabanel district of Bussolengo, a town a few kilometers from Verona, in the plain between the Adige and Lake Garda, close to a cycling route. In 2018 it was given on loan to the cooperative to restore dignity and value, and to rethink it as a useful asset for the entire local community. “Gabanel is a place where you arrive, stay and then leave. This is true, strictly speaking, for the cyclists and tourists we will host, who will be active consumers, as users of a virtuous process of social design, as Mari intended it, but the restart is also metaphorical, for the Neet boys that we put at work, who have stories of discomfort and risk dropping out of school”, says Simone Perina, president of the Hermete cooperative. “We have combined the values of the cooperative with design thinking, because if you build something with your hands, you immediately feel it yours, you feel the protagonist of the project”. 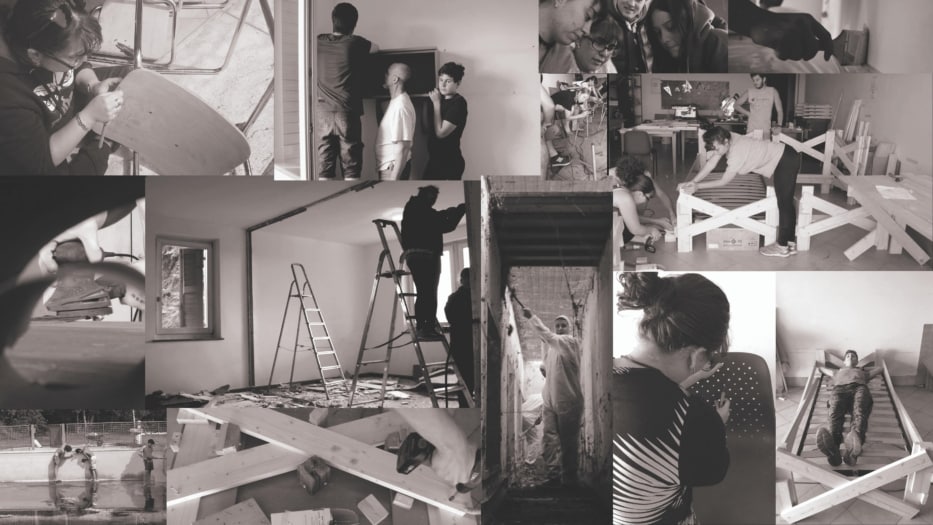 The first phase of the construction of the furniture at the Gabanel. The bike hostel will be a focal point of union between an existing cycle and pedestrian path that will connect it to Lake Garda

In April 2019, teenagers and educators emptied the house and started building the furnishings, after getting to know the figure of Mari through the books and stories of Lisa Ceravolo. “It wasn't just a matter of putting nails and planks together, it was important to make him discover him as a revolutionary figure”, says Ceravolo.

It was Mari who had published the drawings in 1972 and, in protest, had made them available to everyone to be personalized. He had even asked to send the refurbished projects to his studio and, needless to say, thousands had arrived. “We are very concerned with the open source process that was the basis of his work, which is Hermete's idea, to have a project that works and make it available to others”, Perina says, “we will do it with the bunk bed that we invented, which was not foreseen in his drawings”. The Mari series, in the beginning, was born out of a failure. De Padova had asked him to design a sofa bed, which although he liked it, had not been put into production. It was called Day Night and it was very simple and efficient, at a time when furniture had rich and redundant elements. Driade produced it, but with little success. For this Mari was indignant, explaining that the sofa was not expensive enough to be flaunted in the homes of the bourgeoisie and was not understood even by his friends. “People understand ham and wine, but not the shape”, he said. And in the volume Autoprogettazione (Self-planning), reprinted by Corraini in 2002, he asked himself, in a provocative tone: “If people made things with their hands, an object, a flower pot, a chair, a shoe, maybe they would be more careful and improve their taste?”. 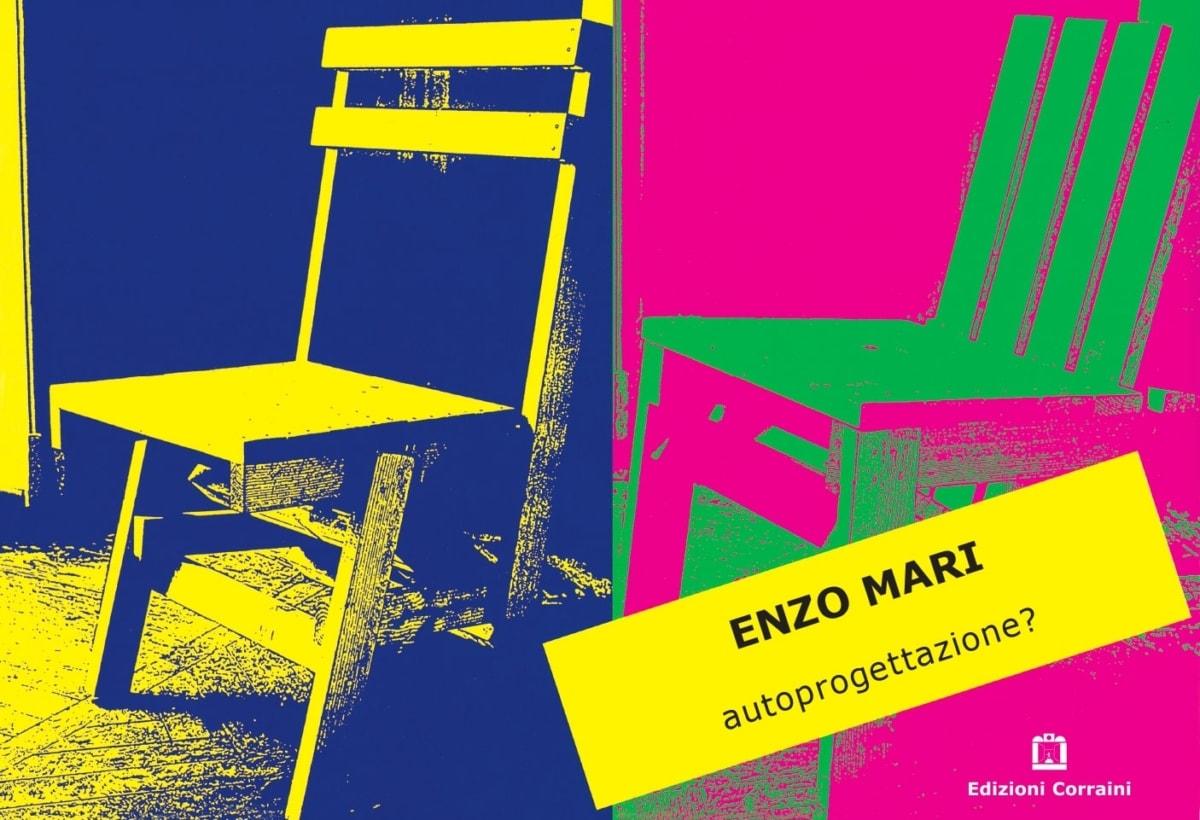 4
The book “Autoprogettazione” (Self-design), (Corraini, 2002) consists of a project created by Enzo Mari in '74 and represents a stimulus (and a provocation) to link creativity to the constructive capacity of everyone, following and/or modifying the trace given by the design drawings of the great master for the realization of a chair, a table, a wardrobe, a bed. The volume takes up the previous publication “Proposta per un’autoprogettazione”(Proposal for a self-design), edited by the Duchamp center in 1974 and printed on the occasion of his personal exhibition at the Galleria Milano

“Young people need to acquire skills, unlock themselves and start entering the world of work in a responsible way. In this way, their self-esteem is also designed, to then accompany them in the path of orientation and job placement based on their propensities”, Perini says. At Gabanel we work to develop entrepreneurship in adolescents, which is not synonymous with entrepreneurship, but means facing situations with courage, getting involved, trusting your ideas and knowing how to translate them into projects. It means being proactive, but not necessarily of your own businesses. And having a project of yourself, first of all. The bike hostel will be managed by what they call “masters”, because the idea is that of the artisan shop where you go to learn, while the operational management will be entrusted to an environmental guide. The“feeders” will take care of the guests, while the “blacksmith” will take care of the maintenance of the greenery and of the swimming pool, supported by a young man, and by a lifeguard, in training. “Waiting for the inauguration, in the month of July, during the weekends we will open the spaces to the community. We will do some self-construction activities and together we will do a large mural in the basement”, Perini continues, “which was born as an informal experiential space, we will host the residential areas of small businesses. There are round tables, electronic instruments, but there is also a lathe”. 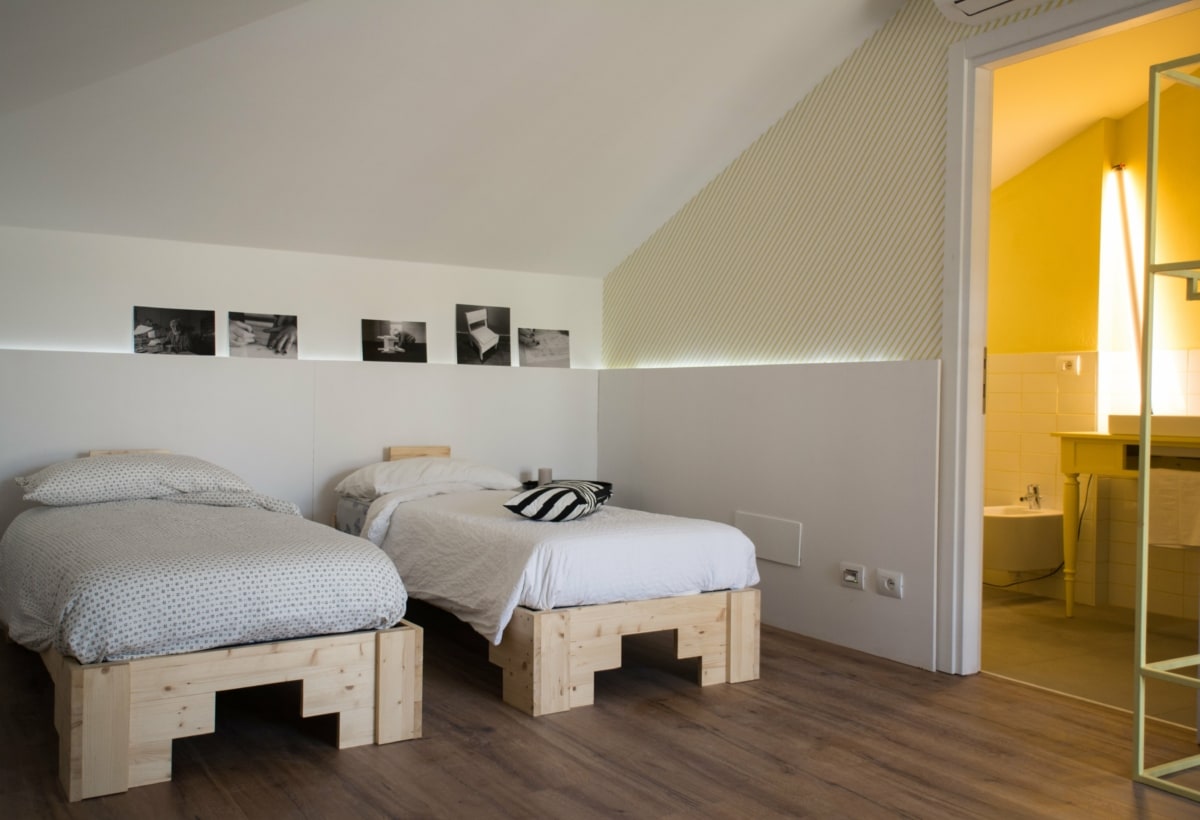 3
The interior of one of Gabanel's four bedrooms, which in total has sixteen beds. The game theme appears through the use of bright colors inside the rooms and bathrooms

Gabanel is a special project, also in terms of construction, because usually one tries to preserve or modify the pre-existence, instead here the will was to totally cancel its negative past as a structure confiscated from the mafia, being a project with a strong social function. “This is why we have created a boiserie that runs along the perimeter of the building, creating a symbolic detachment from the previous architecture, a new skin, a new life”, says architect Marco Grigoletti, who together with Simone Salvaro leads Blocco.18, the studio that followed the renovation together with Lisa Ceravolo. “In the common areas, on the other hand, we started from the concept of the structure, of emptiness and fullness, the obsession of Enzo Mari and we have eliminated all the passage spaces, in favor of those of relationship”, Grigoletti continues. “Gabanel is a project that comes from deep inside, it comes from the heart”. 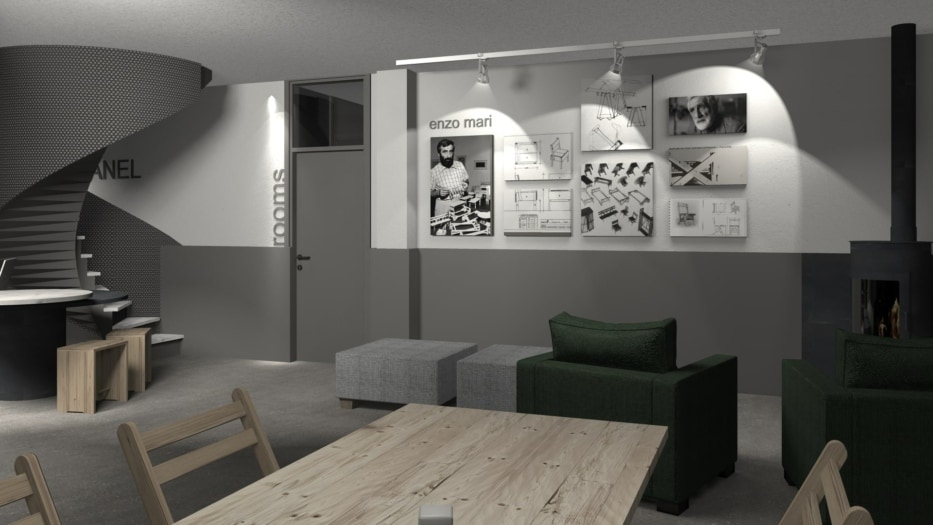 A render of the basement where the workshops will be held. In each room of the hostel there will be a tribute to Enzo Mari, through prints and photographs
#Design #Projects