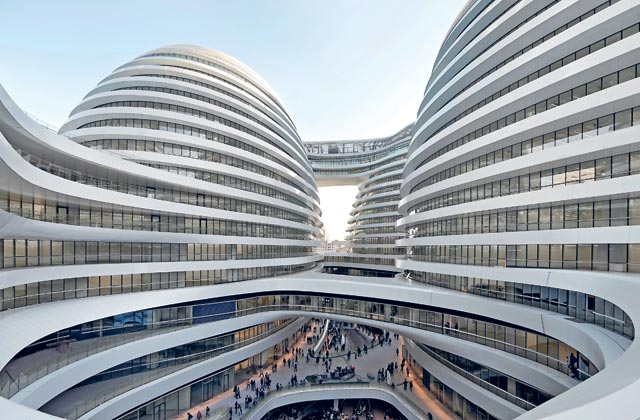 “Zaha Hadid has never designed a shopping center before.

Galaxy Soho therefore represents a welcome ‘democratization’ of her work as an architect.” So begins the nomination report of the Royal Institute of British Architects for Galaxy Soho, a finalist for the Lubetkin Prize 2013. Not a museum, nor an opera house; on this occasion the studio of Zaha Hadid has come to terms with a vast urban project for mixed functions – 330,000 sq meters of offices, shops and entertainment facilities – in one of the most central zones of the Chinese capital, inside the second ring road. Galaxy Soho is composed of four main volumes with 15 floors, which in spite of their distance and separation form a single unit and communicate with each other thanks to a system of bridges, which in harmony with the fluid lines of the four buildings connect the various areas of the “galaxy.” In the structure there are also courtyards and zones of interaction, of different sizes, which link back, though in tune with Hadid’s formal language, to the Chinese architectural tradition, never lacking in internal community spaces. The choice of splitting the overall mass into four asymmetrical volumes of different heights, reaching a maximum of 67 meters, allows natural light to penetrate to the common areas of the ground level – each topped by a glass dome – around which the internal circulation routes are seamlessly organized. The choice of materials like aluminium, steel and glass, together with the dynamism of forms typical of the work of Hadid, contributes to lighten up the image of the impressive structure, while also asserting its solidity. An architecture of imposing size, but not imprisoned in rigid orthogonal blocks; curved lines and staggered planes seem to float in the air, forming a continuum that wraps visitors and ‘immerses’ them in this urban microcosm. Galaxy Soho is not a project conceived only for profit and business: it is also, in an even more significant way, a project of great civic value that permits citizens to reclaim possession of public spaces, contemporary gathering places in which to interact and communicate, not sacrificed in the name of growth, but preserved and enhanced as the basic building blocks of any community. We could define this as a glocal project; a team of international professionals, avantgarde techniques of design and construction, locally supplied materials and workers – making it possible to complete the project in just two and a half years – have managed to reconcile the vision of the architect with the needs of the client, the community and the hopes of an entire nation. As Hadid puts it: “I visited China for the first time over thirty years ago, and I remember thinking, from the first moment, that one day it would be possible to intervene in this context in an extraordinary way. That day has come.”