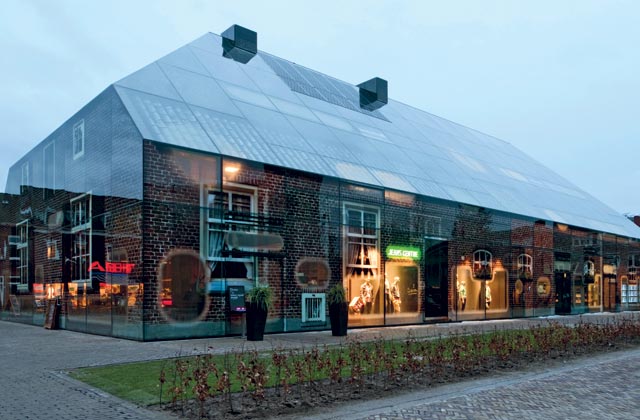 The architecture of the shopping mall began and was developed in America, between studies and models, figurative and typological experiments that led to the reinvention of the European market square inside the mall formula.

Over the last few decades this approach has found its way back to Europe, as a sort of update of a native model. Among the many stories of this architecture Made in USA, for many years the case of the Best supermarkets has been a reference point for international architectural culture, even featured in an exhibition at MoMA NY, in 1979 (Buildings for Bests Products), documenting the sculptural creations of the group SITE and inviting emerging and already famous architects to propose their own ideas for new, possible Best stores. Among the various proposals, the one by Stanley Tigerman, shown on these pages, was convincing and disorienting at the same time, due to its ‘pop’ and conceptual value. The project took the single-family house with garage and yard typical of all American suburbs as an anonymous, popular model, to transform it into a ‘monument’ to the ‘god of consumption’. Tigerman’s idea was to take the small, reassuring house to a giant scale, with its enclosure containing the perfectly functioning supermarket facility, accessed through a frontal opening corresponding to the false fold-back door of the improbable garage. This kind of design irony based on a surprising gesture that creates a kind of objective mass disorientation is the inspiration for the project of MVRDV for Schijndel, the hometown of Winy Maas, together with Jacob van Rijs and Nathalie de Vries as the founders and heads of the well-known Dutch architecture firm, always engaged in design research paced by the invention and development of models of reference that are continuously changing. The project for the new urban shopping center chosen, after seven proposals, to revitalize the old market square, evokes the rural image of one of the many farms of the surrounding countryside, reproduced through printing on panes of glass on a larger scale (1.6 times actual size) in a striking collage of images by the artist Frank van der Salm. The 1600 sq meters of sheltered space (the volume limit of the lot) on three levels, with a triple-height perimeter, are contained in a figure and structure that ape the features of a farm, including straw and roof tiles, and brick facades interrupted by handsome windows in white wood with dark green shutters (all screen printed on the glass). An architectural film, the glass skin of the building, to play with the indoor-outdoor relationship in the dual perception of the printed image that fades, at certain points, to create transparent segments: zones that seem to have been erased from the evocative, forceful hyper-realist texture. The degree of transparency of the printed glass transforms the whole building when it is open in the evening, making it into a sort of gigantic urban lantern with the images of the facades backlit by the internal lights that, as in the case of Tigerman, transform the anonymous, native agricultural building (or, in Tigerman’s case, the single-family house) into a new urban landmark. Inside, the spaces and functions (offices and restaurants, shops, a beauty center, a cafe and other businesses) offer a synergic system that becomes an effective attraction and gather place. So the old square resumes its original market function, in a new urban pole based on a balance between irony and collective memory.