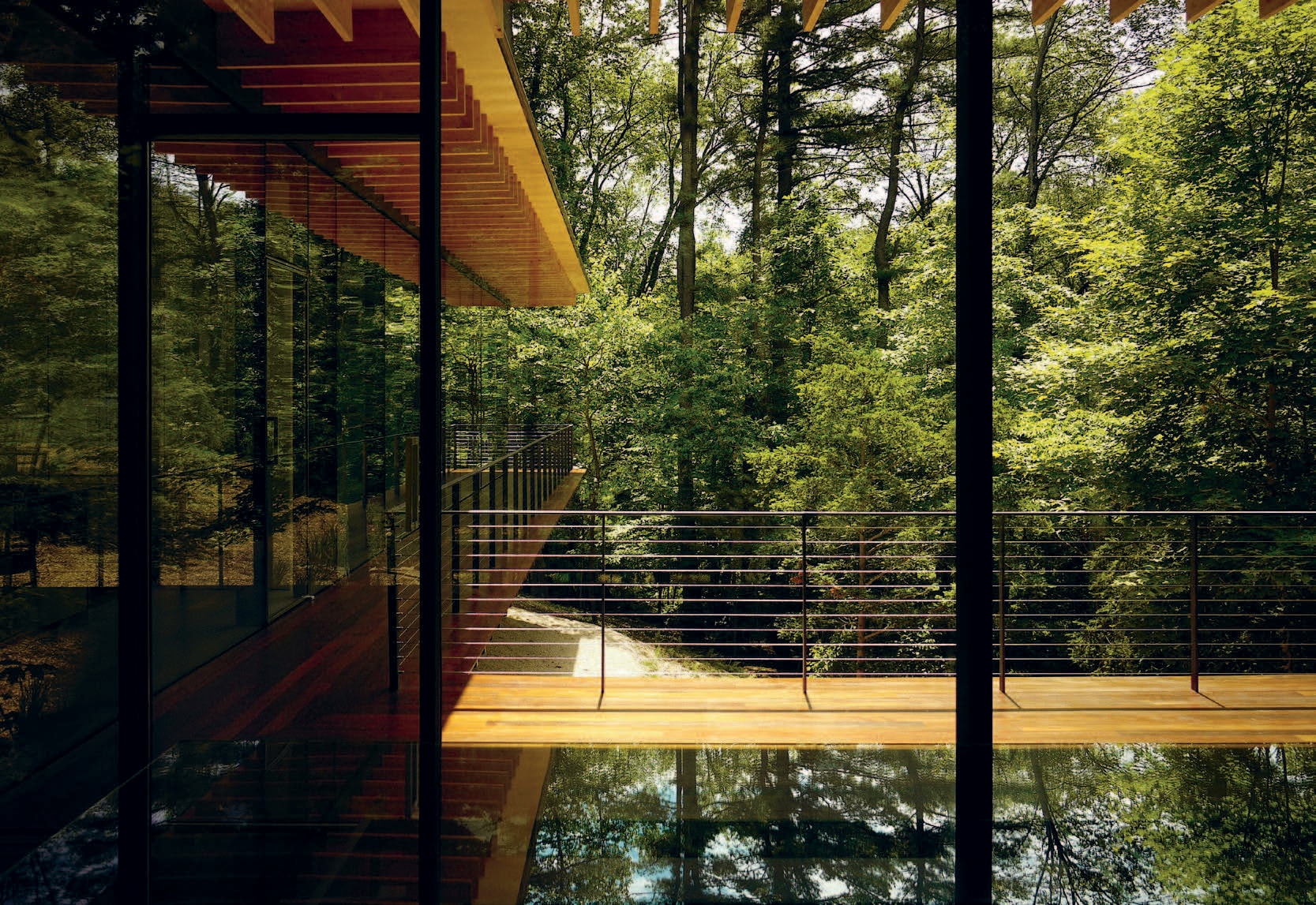 Another chapter of the modernism of New Canaan, Connecticut, USA: the value of herita ge with a touch of Japanese culture, in the project by Kengo Kuma for the new residential pavilion that joins with the 1950s house by John Black Lee

New Canaan, one hour by train from New York, in Connecticut. Here, in the shifting hues of a broadleaf forest, a vivid landscape hosts the debut of Kengo Kuma on the American architecture scene. A new pavilion in wood and glass, conceived as an addition to a residence with a historic lineage, purchased by its present owners in 1990.

The best possible first step in the States for the internationally acclaimed Japanese designer, who makes the relationship between nature and artifice the paradigm of reference in his works. We are in the territory of great modern architecture, the 1950s, the residences of Philip Johnson (his iconic Glass House, a National Historic Landmark, is located nearby), Marcel Breuer, John Black Lee, and others.

The latter, in 1956, built a home for himself that was a frank tribute to Mies van der Rohe: a square, symmetrical layout, modeled on a Palladian villa, a sequence of open zones and large windows, crowned by a continuous porch on all four sides, sheltered by the overhang of the flat roof. The house stands alone in the woods.

But the present owners wanted to enlarge the spaces, adding a new dining room and bedroom, inserted in an organic way in the existing structure. They called on Kengo Kuma, who after having focused on renovating the original house (just refurbished by Toshiko Mori) – the central fireplace in the living area is now clad in silver, while rocks and white gravel have been placed around the building to underline a new oriental aesthetic of modernity – came up with a brilliant solution for the new spatial requirements: the construction of a new wing connected to the house by a glass walkway.

“This was a way to inherit the spirit of the striking modern architecture by John Black Lee,” Kuma explains, “and the genius loci of New Canaan.” With an L-shaped plan, the new volume in wood and glass stands, diaphanous, on a gentle slope, and is asymmetrical with respect to the existing construction, with which its roof level is aligned.

“The project establishes a new dialogue with nature,” Kuma continues, “an orthogonal scheme that shrugs of rigorous but static symmetry to order and balance spaces in an attempt to create a sort of ‘intimacy’ in the forest, without threatening the integrity of the original composition.”

Actually, the new architectural figure seems to dematerialize and blend with the natural panorama, precisely because it is a glass enclosure with transparent corners, built with slender flat steel pillars specially designed down to the detail of the T-shaped joints in wood and steel. Light and simple in its transparency and essential figure, the result of a technical perfection that is not displayed, and a return to archetypal tradition that avoids any hint of the vernacular, the work finds its fulfillment precisely in the relationship with the tall trees of the surroundings.

Because for Kuma everything is nature. Also the project materials: from the Canadian black spruce joists that emphasize the axial design of the external routes to the rhythm of the internal ceilings, from the dark Ipe wood of the floors to the shelving in light maple.

The lack of internal partitions, replaced by diaphragms of steel screen, and the soft lighting complete the composition with an added value: in the unity of the whole, they stimulate that sense of floating in space and luminous vibration of materials, offering multiple perceptions, visual effects of reflection and opacity, shadows, tactile, acoustic and even olfactory modulations. “We have worked to achieve a ‘medium transparency’ as opposed to the full and ‘isolated’ transparency of the 1950s.” In other words, how to rediscover a place.

Art&Food
The residence of John Black Lee built in 1956 (as a tribute to Mies van der Rohe) and purchased by its present owners in 1990, who commissioned Kuma to renovate the house and design an L-shaped addition.
The architectural volume stands on a slope, with the refined vigor of a glass enclosure with sharp corners, structured with specially designed slender flat steel pillars.
Two elevations
The overall plan.
Lightness and transparency: the new architecture in steel and glass dematerializes and blends with nature, also evoked by the material accent on wood.
Views of the architectural complex. The new L-shaped wing, with a continuous porch along all four sides, interfaces in an organic way with the existing house thanks to a glass walkway, maintaining alignment with the roof level and reordering the original rigidly symmetrical layout. (Photos by Scott Frances)
#Design #Projects