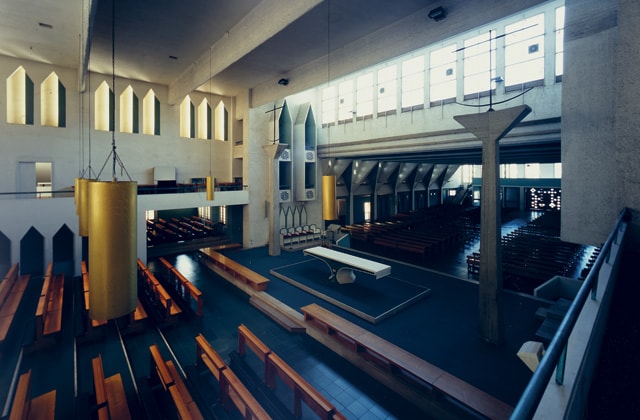 A church like a ship, with a big sail standing out against the sky, where angels can linger.

When the archbishop of Taranto asked the Milanese architect, approaching the end of a long and glorious career, to design and build the city’s most important church, Ponti – after accepting with enthusiasm (he had already done some very beautiful churches in Milan, in the economic boom years) – thought precisely about this image, the city’s seagoing history, its particular configuration with two contiguous but separated seas. He also thought about its troubled history, its status as a Greek city, hostile to the Latin world. So he pondered a place of worship that would reflect the sea and be reflected in it, surrounded by a forest of Mediterranean trees, an island gripping the sea of Taranto. The facade, a delicate baroque-toned work of lace, would reflect in the water of the three large pools in front of the church, reproducing the effect of a sail moved by the wind. The interiors have a single large nave, supported by a hefty structure in exposed reinforced concrete, closed by the altar facing towards the seating and by two large pillars, also in concrete, that support two anchors, altars behind which there is the hint of a choir and a balcony set apart by a Gothic-like geometric game of windows. Ponti also created the frescoes of the angel and the Virgin over the choir. The first thing that strikes those who enter is the use of color, the luminosity and the body of certain tones of intense green, a shade Ponti had already used elsewhere, but one that takes on the characteristic of a formal language here that launches the whole composition, contributing to our perception of the structure as a large marine cavern, emphasized by the intense light from the south during certain periods of the day. Certain details emerge, like the confessionals in pale wood set into the concrete structure, the large chandeliers in gilded metal hanging from the ceiling like drops of light, or the lateral chapels with small altars and accessories in bronze. Faithful to the tenets of his thinking, Ponti creates a cathedral that respects an ‘ancient’ concept while updating its structure in a dynamic way, permeating it with modernity, referencing classical styles only “to conserve the antique Italian energy that continuously transforms them.”