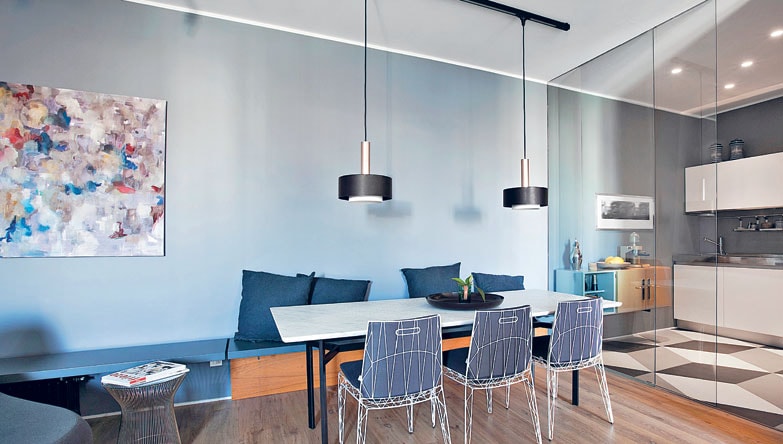 “Five movers carried it, inside a wooden chest, up the stairs to the fifth floor: a slab of white Carrara marble, three centimeters thick, rounded at the edges, and milled with a one-mm engraving to represent an exploded plaid pattern, the image of a picnic table.

Quite a feat” says architect-designer Diego Grandi, from Romagna, living in Milan, who found his home in the city on the upper level of an elegant 1920s building in the Città Studi zone. Let’s start with the table, a marble top on a metal base, three months of trials and samples… because it sums up the spirit of his design poetics, shifted into the 80 m2 of a traditional apartment – entrance, central corridor, rooms lined up at its sides – where nothing has been left to chance. The rigid existing layout has been reinterpreted to create an open space of 36 m2 that now combines, in a flexible whole with suspended ceilings, the entrance, living, dining and kitchen areas (the latter placed where the entrance used to be), then reworking the access corridor that leads to the studio zone, on one side, and to the large new bath on the other, with the bedroom at the end, equipped with a closet bordering the bookcase wall. This microcosm, reflecting the idea that “a room is the beginning of a city”, to quote Richard Rogers, is interesting above all for its details, with surgical graphic cuts, rigorous lines and forms, full and empty zones, to create an atmosphere of great visual clarity. From the table to the bed, the bath to the kitchen, the bookcases to the bench, the cabinets to the full-height doors, every element had to first of all respond to a specific intention, Grandi explains: “to produce an effect of illusory expansion, of spatial dilation, almost the visual disorientation of Escher, offering depth of field for an enclosure of relatively limited size”. This should come as no surprise. Diego’s design approach has always made architecture interact with objects through work on surfaces, which become a pattern of signs and meanings, materic and chromatic, decoration that is not just an end in itself. Especially when the thought of the hand interprets his favorite material, ceramic, adding color and texture to thin sheets, making it a tool of 3D spatial perception. Strong, precise points appear one by one in the rooms. Starting with the partition with lateral wings that draws the gaze, upon entering, like a frame enclosing gray cotton curtains, concealing two openings offering a view of the city. Between them, at the center, a low cabinet in white planks built into the wall is at the service of the living island, featuring furnishings and objects selected from an anthology of the best of international design. On the opposite side, in a continuous, fluid way, the dining area extends, in visual contact with the kitchen bordered by a full-height sliding transparent glazing: a neutral setting, in tones of white and black, blue and gray, warm and cool shades, with the velvety effect of a matte gray enamel finish that saturates the long wall and the bench with cushions. In the overall alchemy, the only element of dynamic counterpoint is the distorted orthogonal design of the ceramic facing of the kitchen, which interrupts the uniform oak flooring. A solution that provides a forceful 3D effect, amplifying the perspective, enhanced by light deployed on two parallel tracks attached to the suspended ceiling for the entire length of the living area. The tracks host the spotlights (a prototype) that discreetly underline the surprise of paintings on the walls, as well as 1950s Scandinavian design lamps that can be repositioned, when needed, on the big marble table. The track concept is a strong point of the design, returning in the bath, where the washstand and accessories conserve their flexibility of configuration precisely thanks to a bar on the wall on which they can slide. The refined 3D expansion effect returns in the space, with all its expressive impact, thanks to the geometry of the ceramic tiles cladding the walls of the shower, like a backdrop. “There is a story behind some of my projects. The ceramics, for example, of the Mauk series are inspired by the work of Escher (Mauk was the artist’s nickname); while the carpet in the living area, designed for Skitsch, reproduces a portion of the map of post-Napoleonic Milan… intertwining full and empty zones, paths of life” the designer says. In the end, in this “home like me” we can sense the intellectual pleasure of its maker, engaged with those signs of memory that can evoke sensations of the precious, between contemporary vintage and erudite citations: the crafted French vase in blown glass, the Lavenia dishes from the 1930s by Guido Andlovitz, the works of Giovanna Sarti, Peter Würthrich, Guido Guidi, Luigi Ghirri, Roberto Maioli, Tim Ellis. Small pearls. Each with its own tale to tell, cases of elective affinities with Grandi’s poetics. Like the gorgeous Swan chair by Fritz Hansen, chosen in the natural leather version, “with the map of its DNA already imprinted at every point, ready to transform, to take on new colors, to age along with me. Like the house”.