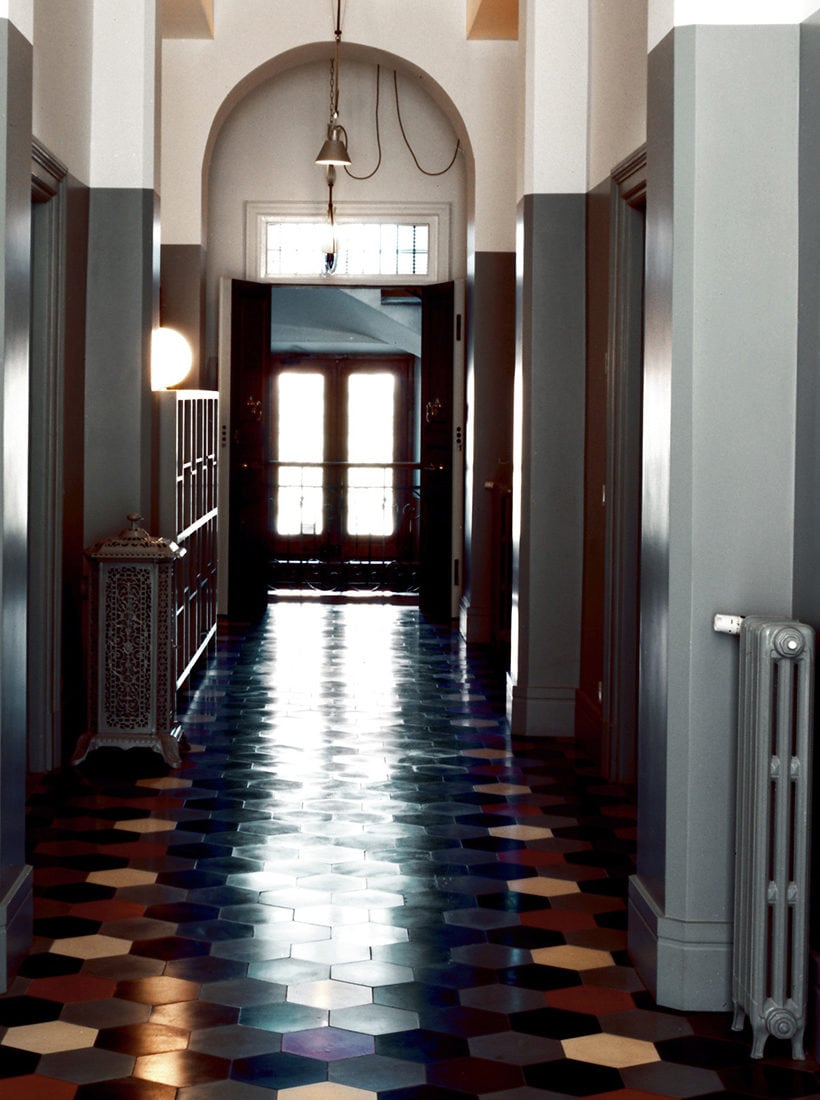 An utterly Roman house. Big, traditional, organized around a corridor. True 20th-century bourgeois, almost austere with its central passage and large rooms on both sides.

In spite of its transformation over time from a home to an office, it has never seemed like banal space. Maybe because of the oversized corridor, the real fulcrum of the apartment.

All this struck us at first glance: an elegant, old-fashioned place, like certain objects or garments we no longer use but still keep out of nostalgia, because they still have a meaning of their own. In the design phase, it seemed inevitable to conserve and even reinforce the charm of this surprising spatial tunnel, not very domestic, not very practical, but striking nonetheless. Especially in comparison to modern standards.

This initial, spontaneous but strong idea grew and grew, surviving layout hypotheses, on the way to a definitive solution.

To keep the central corridor, at first we thought about radically altering the lateral spaces, to create a clear division between daytime and nighttime zones. When we began to remove the finishes, we discovered that almost the entire house featured floors in very colorful, decorative cementine, or cement tiles.

This was when the house revealed its true spirit, and we decided to leave all the walls in place, to conserve the ornamental motifs in their sequence of forms and hues. A new house was born, without demolishing the old one, but building a different one inside the existing walls. A house with a dual personality, a rigid enclosure and an almost animated floor, marked by contrasts of silhouettes and colors, where the traditional layout becomes contemporary thanks to flexible use of spaces.

The new approach is both horizontal and vertical. The corridor maintains its leading role, and since it was the only part of the house lacking the original tiles, its expressive potential has been boosted with a new floor that establishes a relationship with the 20th-century decorations and colors. The choice went to an abstract geometric composition of hexagonal tiles in various contrasting colors.

The result is an apparently random graphic pattern that underlines the spatial breadth of the corridor, reinforcing the house’s character as a multicolored, decorative place. This character is also part of the neighborhood itself.

The visual tunnel leading to the big window at the back has been enhanced by a panel of gray enamel: a continuous sign, a sort of marker that cuts the high perimeter walls into two horizontal bands, and intercepts the long series of doors, twisting like a continuous ribbon through the various spaces and disrupting their proportions.

The axes of doors and windows have been realigned to make the spaces more fluid, in spite of the rigidity of the layout. The concatenation of rooms produces a game of visual accumulation, governed by beams of light that cut across the longitudinal dominance of the corridor.

The typical large size of the rooms has been conserved together with the high ceilings, softened by the two-tone treatment of the walls for a more domestic dimension. The small space opposite the entrance with a large casement for windows, featuring two designer armchairs with a vintage look, has been transformed to make a small lounge connected to the big kitchen and the dining room.

This zone now becomes a true hinge: sliding doors make it possible to convert the three rooms into a continuous space, closer to contemporary lifestyles. Transparency and continuity have also been introduced between the dining room and the living area, thanks to a series of openings made in the wall to offer unusual views while preserving the structural separation. All around there are stucco pieces, chandeliers, family heirlooms from previous lives and homes.