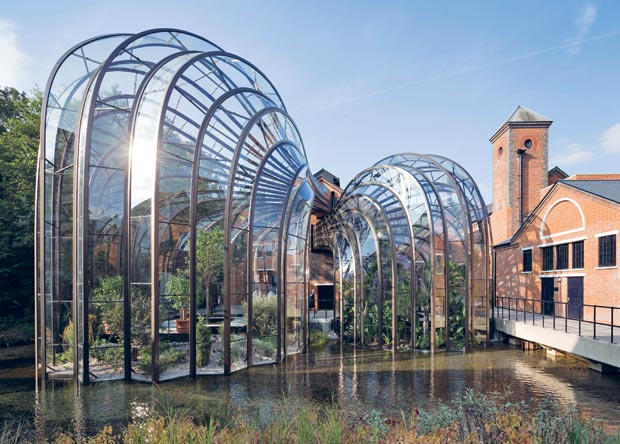 The site chosen for the headquarters of Bombay Sapphire, one of the world’s best-known brands of premium spirits, though founded only in 1987, is a historic site of production from a distant past; as a paper mill – supplying cotton filigree paper to the Bank of England from 1724 to 1990 – the place received as many as five royal visits.

The historical and symbolic value of the site represents the kind of ‘heritage’ required by Bombay Sapphire, which from the viewpoint of marketing and the product’s glamorous image (with Queen Victoria on the label of the blue bottle) wanted to focus on the construction of a ‘historical past’ to be narrated. The old industrial settlement had gone through periods of constructed and environmental stratification. The original red brick structures were hidden by sheet-metal canopies and functional elements; sheds that had grown over time for storage, gathered around the buildings in a chaotic way, like some sort of volumetric mold, erasing the traces of the past; the canals and the overall design of the site were also concealed, and impossible to recognize. The approach of Thomas Heatherwick, the volcanic 360° designer, inventor of forms, objects and typologies, was – in his words – “not simply to restore the existing historic buildings, but also to uncover the canals and to use their presence as a support around which to organize everything. In the conviction that the new master plan of the site would be successful thanks to the transformation of the central courtyard into an effective entrance center and reference point”. This is where Heatherwick has unleashed his compositional brilliance, with the creation of two large greenhouses in bronze and glass, which like a sculptural gathering, fluid and rigid at the same time, spill forth from the windows of the distillery and the old mill, transforming themselves from a metal framework into a surprising work of architecture, a reminder of the examples of the Crystal Palace of Paxton and the Palm House of Kew Gardens, though in a contemporary key; a sensual, sculptural, expressionist construction. The two tentacles open to form glass bells that contain the plants used to make Bombay Sapphire, located in two spaces under glass, one temperate, the other tropical. The two greenhouses stand on the central plaza, freed up like the rest of the sight from any later added elements, and then descend towards the water, in a carefully gauged game of transparency and reflection. Great care has gone into the aspects of energy saving, bringing the project the Breeam Outstanding Gold Award for sustainable architecture, thanks to a series of brilliant strategies, like the use of the heat generated in the distilling process for the warming of the two greenhouses; the restoration of the wheel of the old mill, used as a hydroelectric generator; the use of photovoltaic systems and a natural heat pump; and the recovery of the botanical waste from the distilling, used to fuel a biomass furnace.  An exemplary project that restores the historical memory of a place while adding a contemporary image, filtered by creative sensibility that looks to examples from the path, but without nostalgia.