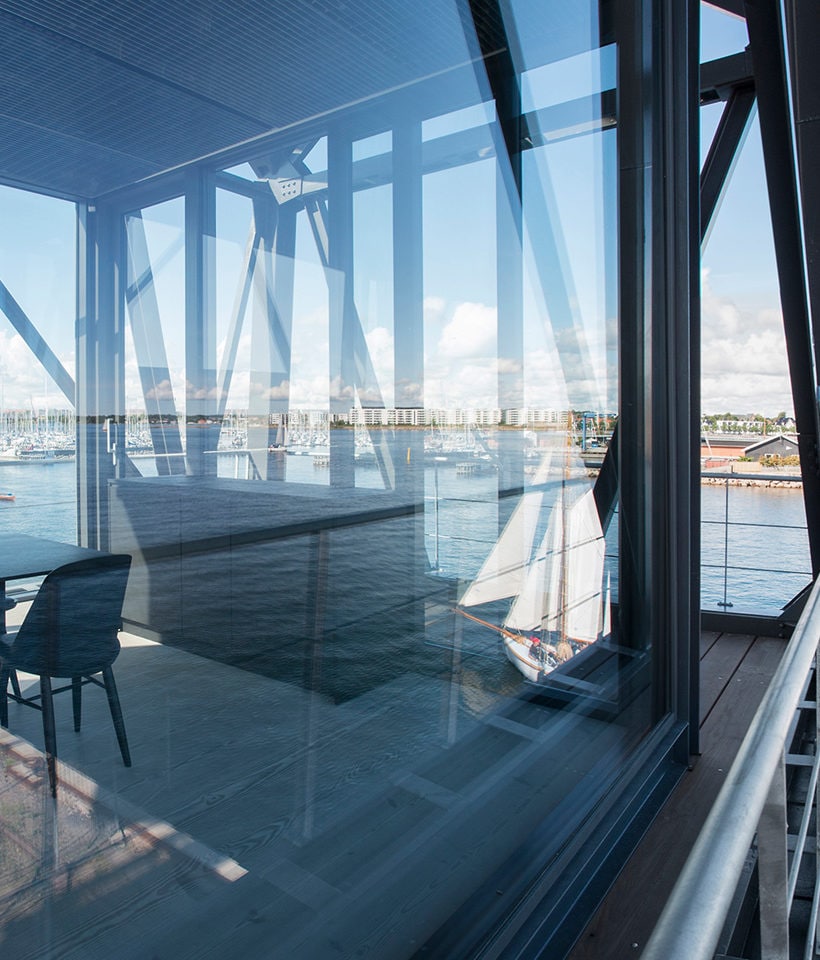 Sixty square meters created in the spaces of a large abandoned crane at the port of Copenhagen: unusual rooms that offer an oasis of relaxation and a truly unusual living experience. With a 360-degree view of the North Sea and luxury services (including a spa)

Reuse: this is the ‘best practice’ of the Danish studio ArcgencY, which has put down roots in the former port area of Nordhavn, one of the most important regeneration projects in the city of Copenhagen. Near the docks, the architects of ArcgencY have set up shop in a group of abandoned containers, converted to create efficient and very sustainable workspaces.

We met with Mads Møller, founder of the studio along with Simon Vinzent (recently listed among the top five design firms to watch in 2018). From the windows of their very luminous office, we were also able to admire the latest surprising project by the studio: an old crane on the wharf once used for loading and unloading coal, now functioning as a ‘buen retiro’ by the water.

“At first we did not have a clear idea of how to develop the concept,” Møller told us. “The only certainty for my team and for Klaus Kastbjerg (the developer of the project with the company Unionkul, ed.) was that we wanted to conserve that amazing crane as an indispensable iconic presence, bearing witness to the industrial past of the port area of Nordhavn. From a simple conservative restoration,” he continued, “we gradually shifted towards the idea of a true functional adaptation. In other words, our crane would keep its original form, but for a new use, transforming to become the Krane Room.”

The result is this refuge facing the North Sea (you can also rent it through Airbnb, complete with an electric city car), where water, light and sky create a truly unique multisensory experience. “The structure has multiple levels,” Møller explains, “each of which has its own independent function: the first floor, reached by means of a staircase/drawbridge, has a large glass room that functions as a dining room, but also a space for work meetings.

Going up one encounters the spa, topped by a panoramic terrace, and at the uppermost level, in place of the old control cabin, there is a mini-house of 50 square meters, with a bedroom area and a vanishing kitchen: it is an all-black box, a memory of the coal dust that covered the old crane like a skin, but also a visual solution to concentrate the gaze on the marvelous panorama framed by the large windows. Then there is an annex, a sort of ‘room of silence’ hung on the ‘arm’ of the crane, over the blue sea,” Møller concludes.

The elevation.
The ‘Krane’ is like a beacon on the wharf, with its imposing iron structure: access is provided by a staircase/drawbridge.
An annex of the mini-apartment, hung from the main arm of the crane: a large window offers a view of the port of Nordhavn, the former industrial area to the northeast of Copenhagen, now involved in a major revitalization project.
The double bedroom.
The kitchen.
The spa: a space with a sauna area, hydromassage tubs (Duravit) and multiple services (Vola faucets). When desired, roller blinds screen out the light (Kvadrat).
The first floor contains a large volume, completely enclosed in glass: the space can be used for work meetings, or as a dining room for 12 persons.
The one-room space is a completely black box clad in wood (Dinesen). The panels conceal the bathroom; a dining table, benches below the window and shelving complete the simple decor (Menu).
#Design #Projects